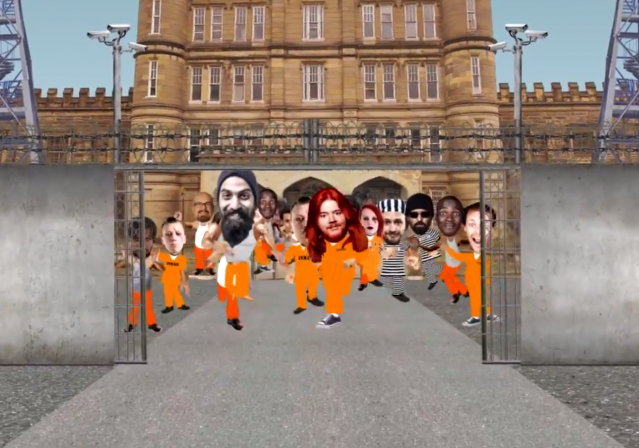 The latest video from the Foundation for Government Accountability argues that Medicaid expansion under Obamacare places convicts in line for Medicaid benefits before the elderly and vulnerable.

According to the FGA:

“Everyone should know that a lawmaker calling for expansion is asking for criminals to get priority medical care at the expense of the disabled, elderly, children and others already enrolled in the current Medicaid program,” said FGA CEO Tarren Bragdon.

“What’s worse is that the victims of violent crimes will now be paying the medical bills of those who victimized them, all while watching their grandparent’s and children’s health care suffer.”

Lawmakers in expansion states have decided to put their most needy citizens on the chopping block so they can move able-bodied, working-age adults; almost all of whom (82 percent) have no children to support, nearly half of whom (45 percent) do not work, many of whom (35 percent) with a record of run-ins with the criminal justice system to the front of the line. So what happens to those on the ObamaCare chopping block? States that previously expanded Medicaid had to eliminate coverage for life-saving organ transplants, overload waitlists for services, cap enrollment and raise patient costs, all because promises were broken and costs exceeded projections.

Here’s the quite operatic video:

Curiously, it’s not those mean and evil Republicans who are slashing Medicaid benefits, nope. It’s Democrats like Rhode Island’s Governor who are placing the able bodied in line before those most vulnerable and in need:

Earlier this year, Rhode Island Gov. Lincoln Chafee (D) submitted a budget that covered the costs of his state’s early ObamaCare expansion by slashing payments to hospitals, nursing homes and insurance companies managing Medicaid plans, while also adding a $250 monthly premium to a program that helps the parents of severely disabled children access services not covered by their insurance. None of his proposals cut funding for services to the newly-covered felons and working-age able-bodied adults under his expansion.

“The entire idea of Medicaid expansion would be absurd if it weren’t so terrifying,” said Bragdon, CEO of FGA. “Not only does ObamaCare expansion ruin a state’s financial future, it also sends the disabled, the elderly and children to the back of the line while the criminals go to the front.”

The problem with the Medicaid “expansion” is that people who would never ever sign up for government hand-outs are now losing their homes. This is not funny; it’s a travesty.

The liability follows them, doesn’t it? Similar to student loans which cannot be discharged. Both are promoted by this administration as “reform”, which offers a plausible cover for a recession. It leaves a nice shimmer on the GDP number.

So, that’s why Obama and the Democrats “threw grandma of the cliff”. To provide medical “insurance” for criminals and illegal aliens.

$3 trillion welfare economy and Obamacare, and there are still indigent, homeless, unidentified, and medically rationed Americans. This includes a $17 trillion debt increasing at $1 trillion annually, which devalues both capital and labor. This includes the abortion/murder of around 2 million Americans annually.