Sgt. Andrew Tahmooressi is still fighting for his release. 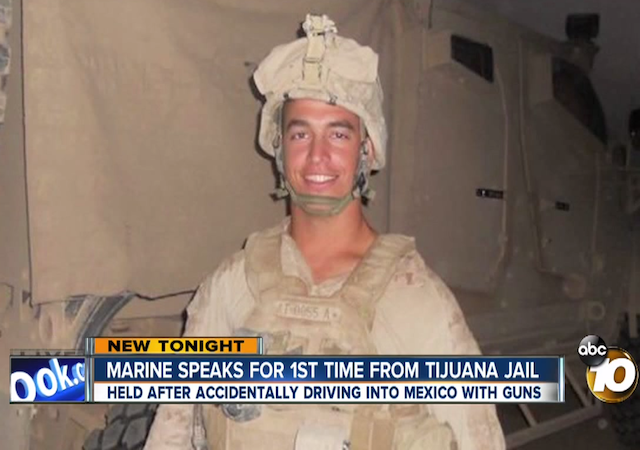 Yesterday, the Mexican judicial system held its third hearing in the case of Sgt. Andrew Tahmooressi. The federal prosecutor and Tahmooressi’s defense attorney, Fernando Benitez, presented selected clips of surveillance footage taken from 18 security cameras showing Tahmooressi’s entry into Mexico and arrest on March 31. The Marine reservist was not permitted to attend, nor were any reporters allowed in the courtroom during the eight-hour proceeding.

As Legal Insurrection has previously reported, Tahmooressi claims that he did not intend to drive into Mexico, but there was no exit accessible to him before arriving at the border patrol station in San Ysidro. He says that he then tried to alert the customs officials that he had legal firearms in his vehicle and wished to turn around to return to the US.

In an interview with Fox News, Benitez gave his perspective on the hearing: “We are happy with the results because we can conclusively state that our client told the truth all along.”

“You can clearly see that my client’s demeanor from the beginning is calm, he is cooperative,” Benitez told Fox Wednesday. “He is clearly motioning … that he wants to go back and motions that the guns are hidden in a certain place and he cooperates with his captors.”

Mexican prosecutors have maintained silence, save for a “fact sheet” outlining the charges issued through the federal Attorney General’s Office in Mexico City in June. The statement stressed that “this is not a political or diplomatic issue. It is strictly a judicial issue that will be resolved by the Mexican federal courts.” Most accounts of the proceedings have come through Tahmooressi’s attorney, who has been granting interviews and posting information on Twitter.

Tuesday’s court proceeding was the third evidentiary hearing in the case, and likely not the last. Unlike the two previous hearings, Tahmooressi did not attend, and reportedly remained behind bars at El Hongo State Penitentiary outside Tecate. His mother, Jill Tahmooressi, arrived in a U.S. government vehicle, entering through a side door alongside Michael Veasy, consular chief at the U.S. Consulate in Tijuana as well as the family’s adviser, Philip Dunn, of the nonprofit group Serving California.

Ultimately, there was no resolution to the case as a result of the evidence introduced. Benitez plans to file more motions, seeking to get the case dismissed on the grounds of improper arrest procedure and the need for his client to get treatment for his PTSD acquired during his two tours of Afghanistan.

However, no new hearings have been scheduled.

In the meantime, a bill introduced in Congress, HR620 by Rep. Ted Poe (R-TX) has gained 61 cosponsors.

UPDATE: Sgt. Andrew Tahmooressi’s defense attorney Fernando Benitez appeared on On the Record with Greta Van Susteren this evening and announced that he will be returning to court on the 29th to present video footage of the route that Tahmooressi took from the parking lot where he got into his car to the border station where he was arrested in San Ysidro.

So how about a swap. We take Sgt Tahmooressi back and they take all of the illegals back. 😉

How about we give them Bergdahl.

How about we start sending back illegal aliens? If we send home another million Mexicans, the impact on the Mexican ecomony would be significant.

We had 3 Mexican cops who illegally crossed the border armed in custody of the border patrol. They were sent home that evening, with their guns, instead of held and traded for the Sgt. as they should have been.

…or how about we send some Marines down there and take him back by force?

Send Seal Team Six. They always have The Corps’ back, and vice versa. Anyway, they need a tune-up game before they tear open a case of whoop-ass and pour it all over some ISIS ass.

Ship the illegals back and fortify the border like it’s Fort Knox. End all tourism to the country for US citizens (by citizen choice, of course). End trade with Mexico and embargo their asses. They need to be put in their place once again. With any luck, their citizenry will wake up and riot against their entire corrupt and inept government.

We had ANOTHER illegal invader…driving drunk…wipe out half a family here in the Houston area last weekend.

We’ll trade him for our Marine.

Laws are important in Mexico, when Americans allegedly violate them. When it comes to Mexicans violating American law, that’s A-OK.

Eric Holder—Useless Att.Gen’l & Obama footstool is in Mexico (or, at least he was there yesterday)and took the opportunity of neither bring pressure to bear, much less mentioning our Marine. Despicable. Obama could pick up the phone to Mexico’s president and have him in San Diego by tomorrow a.m. Loathsome.

All it would take is one phone call from Obama. Five minutes. Since he’s late for everything anyway, he could do it in the limo on the way to the golf course.

“Ola, El Presidente! Bam-Bam here. You’ve got my Marine down there. If he’s not released and returned by the end of business tomorrow, I will sign an order blocking all electronic transfers of funds to Mexico. Oops, here’s the country club, gotta go. Hasta luego!”

We have a traitor in the White House.

The sooner people realize that, they’ll understand why a US Marine is rotting in a Mexican prison while the US government is enabling Muslim fascists to take over the Middle East.

If I were President, I would issue the following statement: To the leaders of Mexico: You will immediately close the US/Mexican border to all illegal immigration, you will accept every illegal alien we deport to you and you will not allow them to return to the US under any circumstances. You will release Tamoorisi immediately and you will compensate him generously for his false imprisonment. You will do all of these things immediately and without reservation or Mexico city will cease to exist. You have 72 hours to comply.

You wouldn’t even have to go that far, it wouldn’t take a single threat of violence all it would take is proposing sanctions, an end to all aid to Mexico, and a bill to move illegal immigration from a civil issue to a criminal issue.

A citizen of ancient Rome could travel anywhere in the Empire and no one would touch him because the vengeance of Rome to those who harmed a Roman citizen was terrible indeed. In our history, Theodore Roosevelt made clear how the US then protected people with his statement “We want either Perdicaris alive or Rassouli dead.” Today, Americans are beheaded and we dither. But, our president won’t even pick up the phone and demand the president of Mexico release Tamoorisi. If the Mexicans don’t release this man pronto, we should consider closing the border for a few days and block any travel or tourism to Mexico. When it hurts Mexico economically, Tamoorisi should be able to come home.

That is because our current administration and most of the federal bureaucracy are traitors not Americans.