In other news, former US Marine still held in Mexico

In other news, former US Marine still held in Mexico 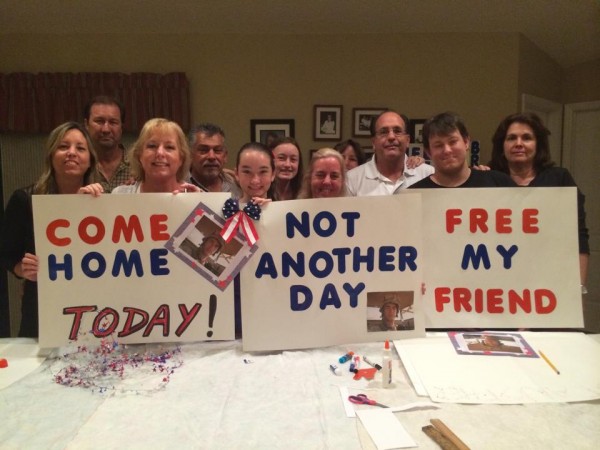 The release of Sgt. Bowe Bergdahl  in exchange for 5 top Taliban terrorists held at Gitmo has led to some mixed and hostile reaction.

Meanwhile, across the Mexican border near my home town of San Diego, another American sergeant is languishing as a prisoner.

The border crossing is undergoing construction, and the warning signs that indicate you are entering Mexico are not terribly visible. So when former active-duty U.S. Marine Sgt. Andrew Tahmooressi wanted to head back home with several guns in his vehicle, he actually began a now two-month journey into the Twilight Zone of Mexican justice.

As Tahmooressi explained, out of a parking lot, “I just made one wrong turn, and then that one wrong turn that I thought was going to take me north to San Diego was actually an on-ramp that swooped around back to the south and to Mexico.”

… According to Jill Tahmooressi, her son immediately disclosed to the border guards that he had weapons and requested that he be allowed to turn around, she said.

“The first thing he said to the first person that stopped him was, ‘I got here accidentally; please let me turn around. I have three guns in my truck,’ ” his mother said.

A 911 tape released by U.S. Rep. Duncan Hunter, R-California, appears to support his version of events.

FNC’s Greta Van Susteren had a heart-wrenching interview with the mother, who indicates that American bureaucrats are not moving and shaking the Mexicans to get the decorated serviceman back home.

According to the reports, Tahmooressi has been subjected to punching, slapping, deprivation of food and water, and being chained to a bed with a “four-point restraint for almost a month.” It appears that the Mexican officials are treating him as a gunrunner.

As more Americans became aware of Tahmooressi’s predicament, there have been a wide array of very measured responses from fellow citizens: 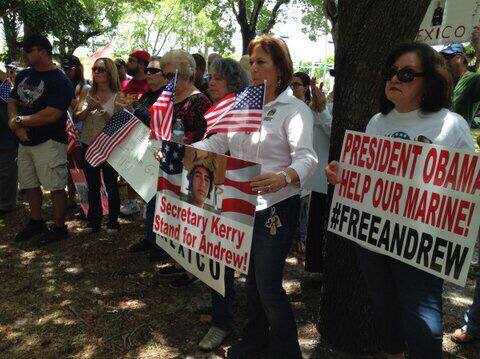 Not surprisingly, Tahmooressi is less than impressed with the entire Mexican legal system. He just went into court and fired his Mexican attorney.

After 59 days in Mexican custody, and a non-stop barrage of misinformation and anti-Mexican propaganda from the U.S. media, Andrew Tahmooressi walked into a Tijuana courtroom on Wednesday, May 28, 2014 to have his day in court. But the marine pulled the rug out from under the proceedings by firing his lawyer at the eleventh hour, thus buying at least another week in his El Hongo (the mushroom) prison cell to get his story straightened-out with his new attorney and figure out his next move.

The Wednesday hearing was set so that Tahmooressi could at last tell his story to the Mexican authorities, hear the evidence against him and cross-examine witnesses. The transportation of guns and ammo into Mexico are strict liability crimes: the harm is presumed. Tahmooressi’s only real defense is mitigation, articulated frequently by his mother Jill — that her son inadvertently crossed the border through “directional dysfunction” brought on by post-traumatic stress disorder (PTSD) caused by his service as a decorated U.S. Marine during two tours of duty in Afghanistan.

There’s also some claims surfacing that a Mexican hotel receipt disproves elements of the sergeant’s story.

A published report in a Mexican magazine article reveals that Andrew Tahmooressi actually stayed in a hotel room in Tijuana on the day he was arrested. The report in Zeta, a Tijuana newspaper, goes on to says he returned to the U.S. for his truck, and the newspaper claims to have a hotel receipt as proof.

Receipt or not, it is obvious to anyone with common sense that our serviceman is no gunrunner and has been abused by the Mexican legal system.

Those in our government who are engaged in “Smart Power” need to stop patting themselves on the back for freeing Bergdahl and use their phones and pens on behalf of the US Marine.

Is it really too cynical to think that Pres. ScamWOW is holding this Marine in his back pocket…sort of a card to play in the NEXT VA scandal or equivalent…???

I think that I might get in hot water for what I’m about to write, so before I do it let me state the following: I’m a life-long conservative and participate regularly in this blog by commenting and submitting a picture or two for consideration and I always get really happy when they are published. I use this blog to follow and kept up to date with issues very close to my heart (such as gun rights, Israel, the BDS movements, etc).

I say this because I don’t one anybody thinking that I’m a liberal troll for saying that I’m finding the response to Tahmooressi’s arrest a little disconcerting from people that I assumed were in favor of the rule of law. Now, before I continue…does that include respecting the rule of law in the U.S. only? Because what everybody seems to agree and acknowledge was that Tahmooressi broke Mexico’s weapons laws by bringing guns across the border.

Did he got there by mistake because he made a wrong turn? Since we don’t have evidence to the contrary, let’s take that as a fact. He still broke Mexico’s weapons laws, but he can use that fact (and the 911 call) to argue that he did not intend to break the law which he can do under Mexican justice…but he still have to face a Mexican judge.

Tahmooressi also attempted to escape, which is another fact that is not in dispute and he can’t expect leniency after that. He also lied to the authorities (saying he has not been in Mexico before) and he admitted to that; he said that’s the reason he fired his lawyer.

”According to the reports, Tahmooressi has been subjected to punching, slapping, deprivation of food and water, and being chained to a bed with a “four-point restraint for almost a month.” It appears that the Mexican officials are treating him as a gunrunner.”

Now, regarding the statement that “Mexican officials are treating him as a gunrunner”: Can you really blame them? Do I have to remind you of Fast & Furious? That was a U.S. government operation that the Mexican government knew nothing about and resulted in the death of hundreds of their citizens. Put on your law enforcement hats for a moment and consider these facts:

-Tahmooressi was in Mexico before (is not clear to me if he was on the day he was arrested); this is not in dispute.
-He carried guns that are illegal in Mexico with him

Would you as a law enforcement officer be at least a little suspicious? Wouldn’t you at least detain him for more questioning and find out how he managed to miss the border crossing that he had used before?

” Not surprisingly, Tahmooressi is less than impressed with the entire Mexican legal system.”

Welcome to the club, but would we even care about the Mexican legal system if it wasn’t for Tahmooressi’s case? Millions of Mexicans and I dare to guess a few Americans are dealing with that system right now and have been for decades. Do we care about them too, or only Tahmooressi? If that the case, at least be honest about it; say that you are furious that this particular prisoner is going through this and spare me the sanctimonious comments about an issue that you didn’t care about and won’t care after Tahmooressi is released.

I will give Mexican law the same respect that they give ours. None.

If they are not respecting our laws is because we are not enforcing them. How many people would attempt to cross the border illegally if they knew that they will be arrested and put away for a few years? Or put it another way, would you approve if American officials dealt with foreigners breaking our laws the same way the Mexican officials are dealing with Tahmooressi?

Our Constitution prohibits it.

Our constitution asserts that the right to bear arms is a fundamental human right, one of the inalienable rights with which all people have been endowed by their Creator, as our declaration of independence puts it. The sole reason governments were invented was to protect those rights, and their existence is only legitimate to the extent that they do protect them. Thus Mexico has no more right to ban guns than the USA does, and we need not respect their anti-gun laws any more than we respect China’s anti-speech laws.

I am mystified at the problem faced by Andrew Tahmooressi in Tijuana. Mexico is US friendly. Mexico earns millions of $ in monetary exchange from the US, second only to its income from petroleum production.

Something else must operative with regard to Andrew Tahmooressi. He would be released promptly were it not for the “something else”.

I wonder, wonder… Is Andrew Tahmooressi a drug courier? Is he connected to a drug cartel?

Given that Obama is accepting thousands of young adults into the US, free of documentation, there has to be something unsaid about Andrew Tahmooressi.

The American people want Sgt. Tahmooressi out of jail in mexico-they have more power than the US Govt.
Simply boycott anything and everything that has to do with that country-(food-clothing-vacations-EVERYTHING!) Their economy is totally based in the United States. Watch how fast he’s back here then…
Remember the Alamo!!!