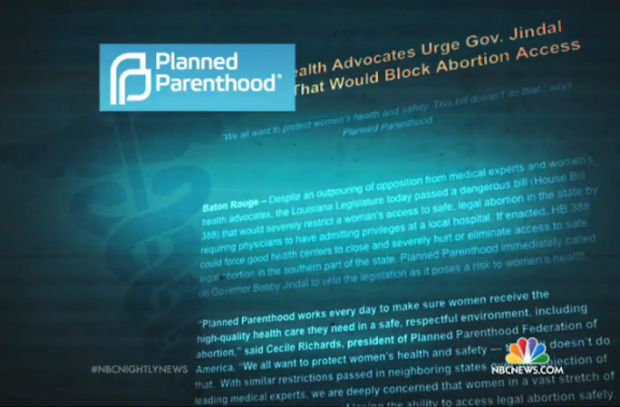 On Sunday, a federal judge temporarily blocked a new Louisiana law that would require doctors who perform abortions to have admitting privileges at a hospital within 30 miles of their practice. U.S. District Judge John deGravelles’ ruling potentially saved all 5 of Louisiana’s abortion clinics from being forced to close their doors today.

“Plaintiffs will be allowed to operate lawfully while continuing their efforts to obtain privileges,” Federal Judge John deGravelles wrote in the decision.

A hearing will be scheduled within a month for the judge to make a more permanent ruling on the law.

Abortion rights activists applauded the decision, the latest in a string of rulings against similar measures, saying it would give doctors more time to seek hospital privileges.

Last week, abortion providers from three Louisiana clinics sued the state over the new admitting privileges requirement, stating that it would cause all of Louisiana’s clinics to close, forcing women to leave the state to seek an abortion. Similar laws have come under fire in Texas and Mississippi, and all are almost certain to head to the Fifth Circuit once the inevitable appeals are filed.

DeGravelles’ ruling is different than others we’ve seen in that it specifically addresses the problem of the time gap that exists between the time abortion providers apply for privileges at nearby hospitals, and the the that those hospitals either approve or reject the application. CBS News explains:

DeGravelles’ order states that “any enforcement” of the law is forbidden until a hearing. However, his next sentences state that the law will go into effect but plaintiffs cannot be penalized for practicing without admitting privileges during this period while their applications are still pending.

The judge said he will call a status conference within 30 days to check on the progress of the plaintiffs’ applications and to schedule a hearing to consider a request for an order blocking the law while the case is in court.

For now, the doctors’ risk of $4,000 fines and losing their licenses outweighs any possible injury to the state from keeping the status quo, he wrote. That’s especially true, he wrote, because Louisiana’s health secretary has said she doesn’t plan to enforce the law any doctors who don’t yet have a final decision on their hospital applications.

The judge’s concerns here are twofold, and stem from the actions of both parties. First, there has been no official indication by the State of Louisiana that they will not retroactively enforce the law against providers who continue to practice while their petitions for admitting privileges are being reviewed. Second, because many of these petitions are still outstanding, attorneys for the abortion providers have not technically shown that all (or any) of the abortion clinics in Louisiana will be forced to close due to the new regulations:

Because the doctors’ applications haven’t all been acted on and the attorneys don’t represent two clinics, that’s speculative, [deGravelles] said.

“How many patients do these other two facilities treat? How many doctors practice there? How many of these doctors have applied for admitting privileges and what is the status of their applications?” he wrote. He said he needs answers to those and other questions, including how far patients would have to travel for care if the other two clinics stayed open.

For at least the next 30 days, doctors may continue to perform abortions without even beginning the admitting privilege application process.

Does it strike anyone else as ironic that we require a doctor to prove his medical competence before we allow him to murder children?

I find it more ironic that these people have taken bioethics and the Hippocratic oath, both of which state, “before all, do no harm”. Perhaps they should take the hypocritic oath?

“For at least the next 30 days, doctors may continue to perform abortions without even beginning the admitting privilege application process. ”
If they didn’t file an application within 48 hours of the law’s passage, I suspect they had no intention of doing so.

Neither mother nor baby. The abortion “procedure” is one of the few “medical” procedures with a mortality rate exceeding 100%. Not even war is so efficient in carrying out mass murder.

If the patient who contracted for the abortion died from complications because the physician didn’t have admitting privileges, who would the survivors sue?

I don’t know anything about hospital administrative practices, but it seems to me the hospitals could simply deny use of their facility to ANY doctor that hadn’t been granted the privilege.

If I understand the question posed to the judge correctly…

An OBGyn doctor delivers a baby and is legally liable for any complications that result from mistakes and has to follow up any problems that result at a hospital and must have admitting privileges.

An abortion doctor ends a baby’s life and is not legally liable for complications from mistakes on their part and does not have to have admitting privileges for follow ups. They just let the hospital handle all their problems for them which do occur with regularity.

Hmmm. Me thinks me smell a rat.