Must have admitting privileges at hospital within 30 miles. 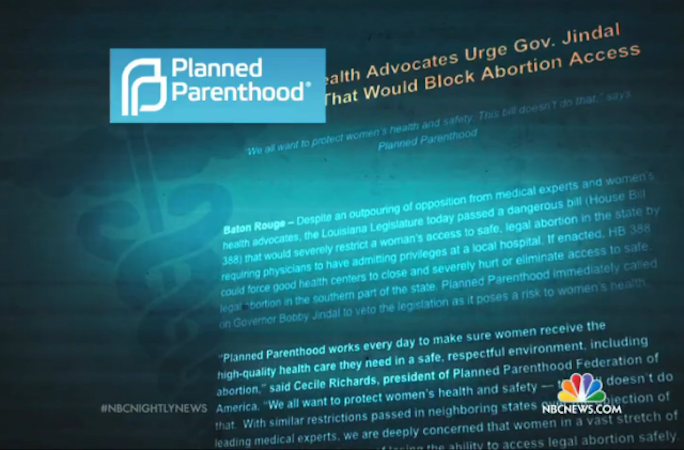 On Friday, several abortion providers sued the state of Louisiana over new laws governing doctors who choose to perform the procedure.

Louisiana’s new law, signed by Governor Bobby Jindal in June, requires that doctors who perform abortions have active admitting privileges at a hospital that is located not further than thirty miles from the location at which the abortion is performed or induced and that provides obstetrical or gynecological health care services.

Abortion providers are suing because they argue that the provisions in the statute may cause every clinic in the state to close. Bloomberg reports:

The Louisiana legislation, signed by Republican Governor Bobby Jindal in June, doesn’t allow enough time for compliance, the clinics argued in court papers. Hospitals typically need three to seven months to decide on a doctor’s application, they said. They were allowed only 81 days to comply with the law.

“It is not at all clear that any doctor currently providing abortions at a clinic in Louisiana will be able to continue providing those services, thereby eliminating access to legal abortion in Louisiana” if the law takes effect as scheduled, attorneys for the clinics in Shreveport, Bossier City and Metairie wrote.

If this case ends up progressing through the court system, it will end up before the Fifth Circuit Court of Appeals. Although (as the article from Bloomberg points out) the government cannot “unduly” weigh down with regulations the right of a woman to seek an abortion (not “have an abortion,” as is commonly misstated by abortion advocates,) the Fifth Circuit has previously ruled that “that driving distance alone to get to a clinic never constitutes a substantial obstacle. No matter how far.”

The story doesn’t end there, however. A similar law in Texas has also come under fire in recent weeks over provisions governing abortion providers’ facilities and admitting privileges, as are new laws in Mississippi. In Mississippi, however, the Fifth Circuit has ruled that Mississippi can’t be allowed to “shift its burden” to neighboring states:

“Pre-viability, a woman has the constitutional right to end her pregnancy by abortion,” he continued. This law “effectively extinguishes that right within Mississippi’s borders.”

Mississippi officials had argued that women seeking abortions could always drive to neighboring states, such as Louisiana or Tennessee, to obtain the procedure, an argument the panel rejected.

The decision did not overturn the Mississippi law or explore whether the admitting-privilege requirement was justified on safety grounds. Rather, the panel said, the law could not be used to close the sole clinic in the state. The opinion preserved an existing stay while the substantive issues were considered further by a Federal District Court. But it set a clear principle of state responsibility that the lower court must apply to this case.

If providers’ attorneys can prove that all clinics in Louisiana will be forced to close as a result of the new privilege laws, it’s likely that eventually the Fifth Circuit will go the route it did in Mississippi, and block the law from taking effect on September 1.

Could the question of whether or not a state is required to allow access to abortion within its borders be heading for the Supreme Court? Only time will tell.

We live in such an interesting time.

On the one hand, our courts have agreed with the EPA that carbon dioxide, necessary for life and long predating life as an atmospheric gas, is a “pollutant”.

Just as we approach what many think will be a long, cold winter, American power plants will be shut down because they didn’t have time to meet new EPA mandates. It won’t just be expensive to buy electricity this winter. You may not be able to at all. And a lot more people die of cold than of heat.

Set that against the court discovered “right” to kill a nascent human being, which simply would have been anathema to the Framers.

Abortion mills, required to meet medical standards most people would think were base-line requirements, might be closed down because they had too little time to comply with the standards. And courts are signaling they won’t let that happen.

The distance a woman must travel morally from precopulating to contemplating abortion to committing abortion is already light years away from the settled science that distinct-chromosomal and personality-defined-life begins at conception.

What’s stopping the “doctors” from getting admitting privileges? Is there some reason they don’t qualify for such privileges?

They qualify. In Texas, some hospitals refuse to offer abortions, even though Texas law forbids discrimination against doctors who do so.

Some hospitals don’t want to be charnel houses. Some simply want to avoid controversy. Others are funded by taxpayers who don’t want to subsidize abortion.

Also, it seems that a disproportionate number of abortion doctors are quacks who turned out not to be very good at keeping babies alive as obstetricians. Consequently, they loose their privileges at their area hospitals. Then they open a clinic and start lucrative careers as abortionists. But as they’ve burnt their bridges at local hospitals, they’re on their own. And skilled, respected obstetricians are not always eager to clean up the tragic train wrecks of botched abortions, so resistance to accepting transfers from abortion clinics is understandable.

If abortion providers weren’t hanging by a tread on the periphery of the legitimate medical establishment, these sensible regulations wouldn’t be such a burden.

Time is a factor. See the article for reference to that issue.

Set aside the moral issues for one moment: medically, there are complications that may occur with surgically-induced abortion. That complication rate is not high (in the hands of a skilled provider) but it is also not zero. It is reasonable for the state to mandate, as part of proper medical practice, that providers who perform a surgical outpatient procedure have reasonable access to a hospital to handle these complications.

What the opponents of this bill are saying is that an abortion provider, faced with a complication after a surgical procedure, should feel free to dump that problem on a local ER. They are saying that abortion providers have no responsibility to care for their patients should something go wrong during or after the procedure. They need not have privileges themselves; they’ll just let the local ER docs, surgeons and gynecologists handle it.

Think about just how callous that is: even if you could square abortion with one’s morals and the Hippocratic Oath, as a physician are you really permitted to walk away from the harm you’ve done? I’m a physician, and for me the answer is a resounding NO!

Another reason for the admitting privileges rule, and the opposition to it: yes indeed, hospital credentialing committees take their responsibilities seriously. They have to, since if a sub-par provider provides poor care at their facility, the hospital will (of course) be sued as well. So credentialing committees do get into some depth in their review of an applicant provider.

And that’s just what a LOT of abortion providers DO NOT WANT. It turns out that a fair number of them are “bottom of the barrel” docs and nurses. They do abortions because no one wants them doing anything else. They have problems in their past and they most certainly do not want those problems brought to light in the local community by the local hospital credentialing committee.

That’s why there is opposition to this law. It’s sunlight.

Planned Parenthood is concerned that a survivor will return to haunt them. That upon reaching the age of majority, they will sue the performing abortion clinic for attempted abortion/murder, naming Planned Parenthood as an accessory.

How do they reconcile an unalienable right to life and a woman’s “right” to abort her child? Surely they do not believe in the false myth of spontaneous conception. A woman’s rights are the same as a man’s rights, which end with another human life, and only include a right to self defense. The prospective mother and father also have a right to choose abstinence or contraception (i.e. prevention, not abortion).

A human rights trial for abortionists would be a landmark case to confirm or deny a human being’s unalienable right to life. As well as identify the responsibilities of a mother and father to the life they conceive. And while the outcome of an abortion action is self-evident, it seems that a formal review is long overdue.