Our troop count is growing. 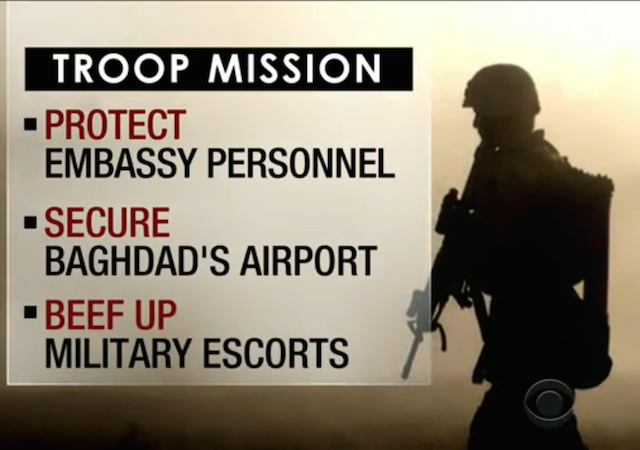 The White House has agreed to send 350 additional troops to Baghdad following a State Department request for more protection at the U.S. embassy and other installations.

“This action was taken at the recommendation of the Department of Defense after an extensive interagency review, and is part of the President’s commitment to protect our personnel and facilities in Iraq as we continue to support the Government of Iraq in its fight against [ISIS],” [White House press secretary Josh] Earnest said. “These additional forces will not serve in a combat role.”
…
“The President has made clear his commitment to doing whatever is required to provide the necessary security for U.S. personnel and facilities around the world,” Earnest said. “The request he approved today will allow some previously deployed military personnel to depart Iraq, while at the same time providing a more robust, sustainable security force for our personnel and facilities in Baghdad.”

According to CBS News, this will bring the U.S. troop count sent to Iraq to deal with the current crisis to 800, and the total U.S. troop presence in Baghdad to 1,213.

In addition to providing security services, the U.S. will also continue to help Iraqi, Kurdish, and Turkish troops fight ISIS:

U.S. bombs have continued to fall on ISIS targets in northern Iraq, in support of Kurdish forces fighting ISIS west if Erbil, since Obama authorized the airstrike campaign just over three weeks ago. Last week, the U.S. military expanded its anti-ISIS campaign southward to assist Shiite Turkmen surrounded by ISIS forces in the town of Amirli, and the Pentagon announced another airstrike there over the weekend.

Meanwhile, this week President Obama will attend a NATO summit in Wales, where he will work with U.S. allies and others concerned about the threat of ISIS to build a comprehensive strategy for fighting ISIS in the Middle East.

Now Obama assured us he would not send more boots on the ground.

So does this mean that those troops wear tennies or sandal; that they are somehow suspended above the ground; or that Obama was lying. Again.

Mission creep. These numbers reflect the amount of personnel the White House wants to give. I’d bet there are quite a few more troops than the “official” number they’re giving out.

Should be undeniably clear to all, as to facial expressions and body language of other heads of state, when meeting barry, AGAIN!

Obama is just pathetic. His utter incompetence is mind-numbing. He really seems to believe he can ignore the warnings from his intelligence agencies for over a year, interrupt his vacation only for a few press statements and a quick trip back to DC to make it look like he was working, and our allies would just step up and volunteer to take their “fair share” of the load just because he wants them to.

Please – they are ADVISORS
And they will not operate outside of Saigon..errr..Baghdad

Mission creep, but without a real mission, other than some “milquetoast” guard duties. How pathetic and how totally jaded, putting our best in harm’s way. For what?

“For what?” You ask? Why, to prop up Barry’s sagging polling numbers, of course. What else would there be?

Mission creep indeed with all the disadvantages of piece-meal commitment and no rigorous review of overall strategy and goals.

It’s not necessary to have a detailed exit plan. I’m reminded of Reagan’s response when someone asked him what the plan was for dealing with the Soviets: “we win, they lose.” Reagan had a strategy, ‘simple’ as it was; he and his advisors then sweated the details and got the implementation right.

Our plan for Iraq today could be as as simple as “we and the Iraqi government and people win, the ISIS loses”. But then Obama and his advisors need to sweat the details and make it happen. I don’t have any confidence that they can do that, and the mission creep and piece-meal commitment demonstrates that indeed, they don’t either.

We’re going to see the recent Libyan scenario played out again in Iraq. US air power limited to fast movers out of Incirlik or off of carriers does little more than temporarily scatter the cockroaches unless we have operators in the dirt laser painting specific targets in real time. There are no longer close air support assets in Iraq. There’s only a couple of options available here. Embassy guards, my ass.

Ya think all those Abrams, A-10’s, Apaches and the like would be helpful right about now?

“These additional forces will not serve in a combat role.”

Missions: Protect Personnel, Provide Convoy Security, and Secure Airport. Nope, none of this could possibly involve a combat role. No way. Right? We have SecDef McNamara’s – I mean HAGEL’s, of course – word on it!

“…this will bring the U.S. troop count sent to Iraq to deal with the current crisis to 800.”

And there are how many IS fighters in Iraq?

Obama: “Let me be clear, there will be no new boots on the ground in Iraq.”

CNN: “CNN’s Maria Degas reports she has been unable to determine the reasoning behind the White House’s insistence that the 350 US troops being deployed to Iraq wear old boots.”

Seriously… if the terrorists can bus in Chechens, why can’t Iraq hire Blackwater and give them the ROEs appropriate ridding the earth of ISIS?

I must assume that none of the troops in Iraq are wearing boots.

Watch developments. All these official reports are lies.