The Washington Post misses a chance to expose Hamas’ deception 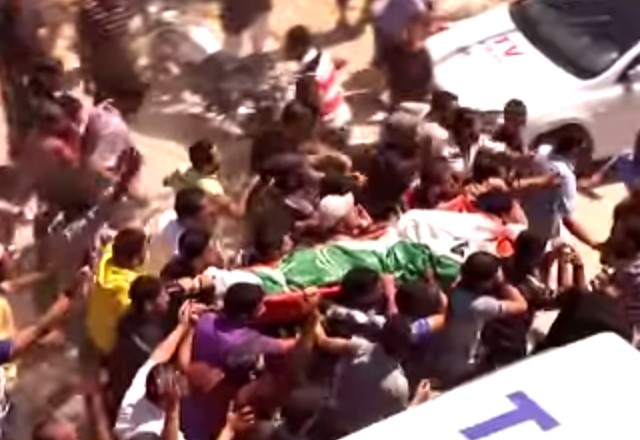 Central to the charge that Israel’s conduct warrants an investigation by an “independent” commission to investigate whether it committed war crimes is the premise that Israel, in defending itself against rockets launched by Hamas into its territory, caused a disproportionate number of civilian deaths.

Since a commission appointed by the anti-Israel United Nations Human Rights Council is looking to convict, a fair investigation into the violence is in order. Unfortunately, in an article from last week entitled “The U.N. says 7 in 10 Palestinians killed in Gaza were civilians. Israel disagrees,” The Washington Post failed to provide the necessary context to allow a proper understanding of Operation Protective Edge.

The war in Gaza will now continue in a battle between databases to determine who was killed and why.

The most contested number, the one that attracts the most stubborn insistence and ferocious rebuttal, is not the total fatalities on the Palestinian side, the more than 2,100 dead in the Gaza hostilities.

The controversy centers instead on the ratio of civilians to combatants, or as the Israelis call them “terrorist operatives.”

Booth’s articles on Operation Protective Edge have often contained similar language describing “mounting Palestinian civilian casualties.” Furthermore, in other instances articles on which Booth was bylined listed casualty totals with no judgment as to their veracity. For example on July 19 a dispatch on which he had a byline reported:

The Palestinian death toll from the conflict rose Saturday to more than 330, including about 60 children, according to the Gaza Health Ministry. An additional 2,200 have been injured. The United Nations estimates that about 80 percent of the casualties are civilians, many of them children.

On July 28 another article which included Booth in the byline reported:

The conflict has killed more than 1,060 people in Gaza, more than 70 percent of them civilians, according to the United Nations. Israel has lost 53 soldiers, the largest toll since its 2006 war with Lebanon. Hamas mortar and rocket attacks from Gaza have killed two Israeli civilians and a Thai worker in Israel.

Each article includes an estimate from the United Nations with no indication of the methodology, and those numbers are in turn reported with no qualifications or challenges. The death toll in one case was explicitly attributed to the Gaza Health Ministry, even though the Ministry is a part of Hamas and therefore unreliable.

Last week’s report deals with some of these objections, but in superficial fashion.

The Israel Defense Forces­ warns on its Web site that “media outlets have relied on Hamas’ statistics when reporting casualties in Gaza, but the terrorist group routinely exaggerates civilian deaths for propaganda purposes.”

But neither the prime minister’s office nor the Israeli military have provided any detailed, verifiable tally of their own to account for their contention that the conflict killed some 1,000 terrorists.

Booth demands proof from Israel but accepts numbers and estimates from Hamas and the UN without question! It isn’t just an Israeli claim that Hamas “exaggerates civilian deaths;” exaggeration was part of Hamas’ media strategy to use the term “innocent civilian” to describe any casualty of the war. This is important, not only because it confirms Israel’s charge, but also because later Booth quotes a Hamas official claiming responsibility for providing the body count:

But on Facebook and Twitter, one Hamas official, himself a physician, provided a minute-by-minute tally of the dead. From his post at the Shifa Hospital in Gaza City, Health Ministry spokesman Ashraf Al Kidra was in the early days of the war the public face of casualty figures, often appearing on camera in hospital scrubs.

“All the world uses our numbers. We are the only source,” Kidra boasted in an interview during the height of the fighting.

This is the real news. An official of Hamas acknowledges that he was the ultimate source of casualty figures. He works for a terrorist organization whose announced intent is to mislead the media and yet Booth makes no mention of any reason to doubt Kidra’s numbers.

Aside from Hamas’ deceptions there’s another reason to trust Israel’s figures: recent history. After Operation Cast Lead in late 2008 and early 2009, Israel claimed that roughly half of those killed were combatants. Nearly two years later Israel’s numbers were confirmed … by Hamas. Initially Hamas’ intent is to demonize Israel so it exaggerates the number of civilian deaths, but eventually Hamas wants to give its martyrs their due.

There are two other points worth mentioning. Booth cited the first report of the Meir Amit  Intelligence and Terrorism Information Center (ITIC) which reviewed the first 150 casualties and was published at the end of July. But ITIC has done three more studies of the Gaza casualty figures. The fourth one was released last week and all four have shown a pretty consistent percentage of 46% combatants to 54% civilian fatalities. Historically, a civilian/combatant fatality ratio of 1 to 1 is almost unheard of.

Booth cites a Palestinian organization called al Mezan as a source for the casualty figures. Booth cites the organization’s work, and to show its independence observes, “Its communications director scrolled through a year’s worth of press releases from Mezan criticizing Hamas for extrajudicial executions, torture of prisoners and dubious arrests.” But as NGO Monitor showed, al Mezan may not have any specific loyalties in Palestinian politics, but it is anti-Israel. Statements from the group refer to the Israeli army as IOF (Israel Occupation Forces) as opposed to IDF (Israel Defense Forces).

Booth is not alone; many reporters rely on the dubious figures from the Gaza Health Ministry. But when he writes about how each side is trying to spin the numbers, he should give a complete picture of the spinning, including his own role in promoting Hamas’ propaganda.

One other tidbit left out by all is that Hamas demands that civilians stand their ground when Israel warns that a attack is coming (something Hamas never does) and become martyrs and Israeli citizens are moved to safety to protect innocents from being killed. This seems like a very important nuance that gets regularly left out.

Of course Hamas is so incompetent as a fighting force maybe its not fair to have to warn the desert sand that a Hamas attaak is coming.

Hamas gives civilians a choice. Certain death from Hamas brutality or possible death from the IDF. Either way they become proof of Israeli “war crimes”.

This is really an exercise in absurdity. Even if the Palestinian numbers are correct, the question that begs to be answered is why did these civilians not evacuate the areas where fighting was occurring? While some attacks were bombs being dropped on various locations such as the house of various commanders, many more were dropped on missile launch sites and other military targets. Even then, the Israelis made quite a few attempts to warn the civilians to leave both bombing targets and front line fighting areas so this begs the question of why did they remain?
>
Assuming the number of civilian casualties is correct, it is the Palestinians who are guilty for many of these civilian deaths by either not allowing civilians to leave or strongly encouraging them to stay in an effort to intimidate the Israelis into not attacking.
>
But this then begs the next obvious question. If Hamas engages in repeated missile, terrorist, and other attacks, then how is Israel expected to defend themselves if the Hamas hided behind civilians making any counter attack impossible? Why impossible? Because any attempt for Israel to attack the missile launching sites or other military target that are protected but a “civilian shield” will result in civilian casualties and the world will then condemn Israel for war crimes because they killed civilians. The argument that Hamas, under the guise of the UN, is making makes it impossible for Israel to do anything other than hunker down and hope no one in Israel gets injured and property is not damaged. Obviously this is not acceptable.
>
Clearly the numbers of civilian vs. military casualties makes no difference because Hamas is the one who is committing multiple crimes. They are attacking a nation who is continually asking for peace, they are demanding Israel be wiped off the map as a justification for their attacks, they are actively engaged in terrorism, and they encourage civilian casualties by using them as human shields. Clearly none of this could be considered legal and clearly this is another propaganda attempt. The unbelievable part of all of this is that so many buy into it as a realistic, logical argument.

Even IF we were to accept the UN (and Hamas) numbers at face value, that puts the IDF at right in the same area that the US army has been in its last major conflicts.

Considering how densely packed Gaza is, even a 70% rate of civilian casualties would be a laudable achievement.

Olinser – 70% civilian casualties is about standard for similar warfare. I included a link to a speech given by Col. Richard Kemp after Cast Lead. Kemp said that in Afghanistan the estimated ratio was 3 to 1; in Iraq and Kosova it was 4 to 1.

when protected areas, such as schools, hospitals, residences, etc, are used for military purposes, they lose their protection under the laws of land warfare, and the party using them is responsible for the civilian casualties that inevitably result from such acts.

therefore, most, if not all, “civilian” casualties in Gaza are the fault of HamAss, and their leadership is guilty of war crimes for their policies.

So what wonderful fruits have come out of Barack Obama’s decision to join the HRC, which W was smart enough to stay out of? We need to get out of there pronto.

To be frank, among terrorist governments, the UN should take first place.