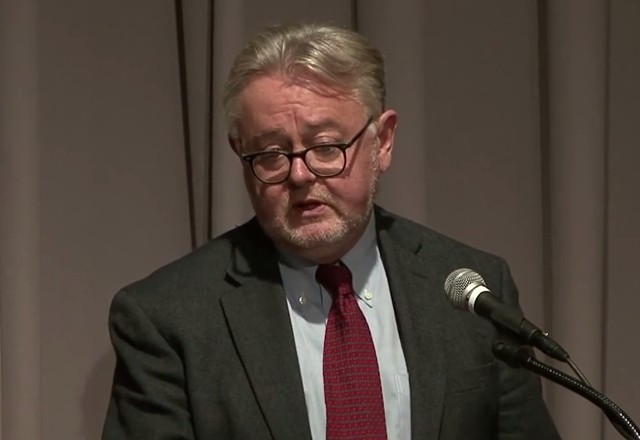 The United Nations Human Rights Council (UNHRC) has decided that Israel’s self-defense needs to be investigated. (Note in the UN”s announcement the words “Hamas” and “rockets” are nowhere to be found.) After Operation Cast Lead the UNHRC picked a panel of four individuals, all of whom had prejudged Israel’s guilt. The leader of that investigation, Judge Richard Goldstone of South Africa later recanted his group’s conclusions, but the damage was done.

The UNHRC has decided that having a committee that is biased against Israel is necessary and selected an Irish professor of human rights law named William Schabas to head the new committee. Schabas has been involved in the travesty called the Russell Tribunal on Palestine along with crackpots such as Cynthia McKinney. At a hearing this “tribunal” in 2012, Schabas said “[m]y favorite would be Netanyahu within the dock of the International Criminal Court.”

UN Watch has compiled a list of statements and from Schabas showing his bias against Israel, including:

– In a 2009 blog post about the UN’s infamous Durban II conference on racism, Schabas urged the world not only to “ignore” Iranian President Mahmoud Ahmadinejad’s statements, but to stop “exaggerating” them. According to Schabas, those who “deserve the blame” are “Israel and its friends, who have manipulated the truth about the nature of the work of the United Nations by gross exaggeration of the role and intervention of certain fanatics.” Schabas described Ahmadinejad as nothing more than a “provocative politician,” and not a torturer of dissidents, inciter of genocidal anti-Semitism, and arch-sponsor of terrorism.

– In 2011, Schabas went to Iran to co-sponsor conferences with the Tehran-based “Center for Human Rights and Cultural Diversity,” despite its intimate ties with the fundamentalist regime, and avowed propaganda agenda. The center’s director, Kamran Hashemi, a former political officer with Iran’s foreign ministry, wrote his Ph.D under Schabas at the Irish Center for Human Rights.

After citing Schabas’ record, Hillel Neuer, the executive director of UN Watch, wrote ““Under international law, William Schabas is obliged to recuse himself because his repeated calls to indict Israeli leaders obviously gives rise to actual bias or the appearance thereof.”

After Goldstone retracted the report that bears his name, Schabas mocked Goldstone for  being “certainly more indulgent towards Israel.”

None of this surprising as the UNHRC as Israel is the subject of a permanent agenda item of the council.

George Clooney’s fiance, Amal Alamuddin was also selected to serve on the panel but declined.

“I am horrified by the situation in the occupied Gaza Strip, particularly the civilian casualties,” Alamuddin said in a statement, “and strongly believe that there should be an independent investigation and accountability for crimes that have been committed.” …

Clooney’s wife-to-be wished the other panelists “courage and strength,” as they go forward with the inquiry into Israel’s actions during the month-long Operation Protective Edge.

Alamuddin didn’t decline on account of principles. She even falsely called Gaza “occupied,” when Israel withdrew from the territory in 2005.

Early reporting on Shabas had him acknowledging that Israel’s actions during Cast Lead “were not on the same scale as more serious violations elsewhere in the world.” But the reasonableness of such a claim has been outweighed by Schabas’ overall record. Last year Schabas argued that Syria’s use of chemical weapons was not technically a war crime and instead used the killing of over 1000 civilians to argue that it was the United States that wants to “monopolise” its possession of weapons of mass destruction.

The UN has lost all credibility.

The UN has become a propaganda arm of Islam.

Several years ago, the workers at the Commissary in the UN walked out over some kind of dispute. The “diplomats” promptly looted the place.

The UN has become a parody of the third world sh!tholes and dictatorships which constitute 90% of its membership. Most members only subscribe because of the “free sh!t” that comes to them, via the US taxpayer.

Maybe the House needs to defund this failed experiment, as well. The Euros like to criticize us? Let’s ask the UN to leave for Sweden, Switzerland or maybe Swaziland. See how THAT works. (It will sure be easier to drive around NYC!)

The United Nations autocrats’ club has facilities in Geneva. I would not shed a tear if the moved there permanently.

These days, the phrase “Human Rights Council” reminds me of “The Democratic Republic of North Korea”

Seriously. Does ANYBODY pay the morons in the UN the slightest bit of attention?

They have no clout and no teeth. Unless the US, Russia or China backs them militarily, they can do whatever they want, nobody will ever listen.

I wish they were are toothless as you suggest.

Currently, the UN is one of the worst aiders and abettors of Hamas, the general Islamist tide, and general animus toward democratic and capitalist nations.

I cannot think of a worse place to put U.S. dollars or credibility.

The UN should be shown the border on their way out. Oops, forgot there is no border!

Not quite – the eastern border leading to Europe would merely dump them into the sea.

Schabas is Canadian, not Irish. He has a post at the National University of Ireland Galway, but he is one of those celebrity academics who wanders around. Galway is the trendiest city in Ireland, and his mindless bigotry is a perfect fit there.

I believe that is the Irish city that erected the Che public urinal/memorial.

Galway is indeed the home of the Ché Guevara Memorial Urinal.