For Rick Perry, the Clock is the Enemy

For Rick Perry, the Clock is the Enemy

The clock is ticking in the race to the White House, and the indictment lingers. 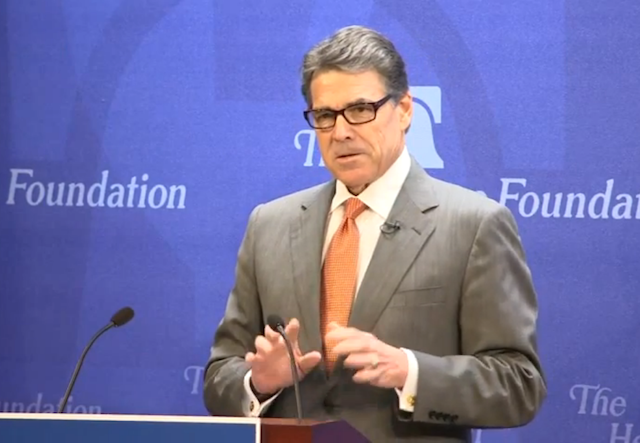 Defense attorneys have filed a motion to quash and dismiss the indictment of Rick Perry, once again bringing into focus the divisive nature of the charges filed against the Texas Governor.

According to the motion, Perry’s lawyers are banking on the illegal nature of the indictment itself, saying that “[c]ontinued prosecution of Governor Perry on the current indictment is unprecedented, insupportable and simply impermissible. This attempt to criminalize the political process should not be tolerated by this Court or any Texas court. Otherwise, overzealous prosecutors will be given free reign to use the grand jury process to chill political decisions by Texas’ Governors.”

This is the second of two separate sets of motions aimed at getting the case thrown out. The first, a writ of habeas corpus, was filed in late August.

The concern here isn’t that the outcome itself of the trial will affect Perry’s chances at the presidency, but that the legal process will overlap with prime campaign time.

If the case continues deep into 2016 election season, some Republicans who rushed to Perry’s side — including fellow potential 2016 contenders like Bobby Jindal, Jeb Bush and Ted Cruz — could make a different calculation, said Jim Henson, director of the Texas Politics Project at the University of Texas.

“The clock is ultimately the enemy here,” Henson said. “Should he wind up having to go to trial, having a series of court proceedings on this as we’re getting closer or entering the presidential primary season, the situation begins to change, and not for the better for the governor.”

Even if the case is allowed to proceed, Perry’s legal team has a plan to keep things moving:

“I expect there will be other motions filed before any trial occurs,” [lead counsel Tony] Buzbee said after the first motion was filed. “But once they are addressed and if the case is still pending, I will want an immediate trial in front of a jury, and I expect the governor to be completely vindicated because what he did was not only legal, it was right.”

Governor Perry’s team has been doing an awesome job deflecting what has been accepted by analysts on both sides of the aisle as a purely political attack on behalf of the Travis County DA’s office. Perry hit the road immediately following the indictment and booking, and has spent the majority of his time in key electoral states like Iowa and South Carolina.


Although doubling up on motions with the same general premise (the impermissibility of the indictments themselves) may seem repetitive, legally the move makes sense, especially if the court consents to hear both motions at the same time.

“They say the same thing but they’re very different things,” explained Philip H. Hilder, a Houston defense attorney. “The writ is saying the judge doesn’t have the authority to move forward on the indictment, while the motion to dismiss is acknowledging that the court has the authority to act on indictment but it ought to be dismissed as a matter of law.”

In effect, the lawyers are asking the judge to toss the indictments no matter how he rules on the court’s authority to proceed.

“If you can’t get through the front door, you go through the back door,” Coggins said. “I think they’re covering their bases.”

Governor Perry’s next day in court is scheduled for mid-October. You can read a copy of his team’s motion to quash and dismiss here, courtesy of the Huffington Post:

As far as I am concerned, Perry is no longer a player on the presidential stage. Not since he hired Barbour and Schmidt. Why didn’t he hire Cris Matthews and Jay Carney while he was at it? [Although I don’t think either is as corrupt and vile as Barbour].

After the literal blank-out of four years ago, and this metaphorical one, I wonder if he should get a thorough neurological exam.

One good thing: it removes an impediment to Cruz’s candidacy.

Admire Rick Perry I do, but we have Ted Cruz in TX, and being from the same state, can’t practicably be on the same ticket. So Perry will have to keep doing the examplary job he currently is doing, or be appointee in a Cruz administration. And he should keep the TX Dem politicos as busy and energy-diverted as he can. That’s okay. 🙂

Good luck, Perry. It’s hazardous to hold presumptive overseers accountable for their actions. Hopefully you have sufficient leverage to hold the office of public integrity (or whatever) accountable for corruption in their midst.

Rick Perry made a fool of himself in the last presidential campaign. He simply is not very intelligent and he is a glad-handing, “whatever-it-takes-to-win-friends-and-influence-votes” politician, who will never get us out of the hole we are in.

“The big lie in Perry’s PR playbook is to dismiss these charges as a partisan witch hunt. While there’s no bipartisan love between Perry and Lehmberg, Perry’s indictment has been advanced by Republicans. Recusing
herself, Lehmberg referred our complaint to local Democratic Judge Julie Kocurek. Judge Kocurek also stepped aside, forwarding the matter to a Republican Perry appointee: Judge Billy Ray Stubblefield. Stubblefield
assigned the case to Republican Judge Bert Richardson in San Antonio. And Judge Richardson appointed Michael McCrum as special prosecutor.

It’s hard to argue that McCrum has a partisan axe to grind. He served as a federal prosecutor under the first President Bush. The second PresidentBush later nominated McCrum to be a top federal prosecutor — with the backing of Texas GOP Senators Kay Bailey Hutchison and John Cornyn. If Perry’s indictment really is a partisan witch hunt, then it is one of the Grand Old Party’s making.”

http://www.politico.Com/magazine/story/2014/08/rick-perry-indictment-liberals-110229.html#.VAjL2mNBp9N
——————————
Further, compare the Perry indictment to the House lawsuit. While the Perry indictment is moving crisply along, Mr Boehner has only just hired an attorney but has not proceeded to make any filing at all. If he thought the case was legally valid he would be filing it asap. But its not valid and he knows it. If it was to go in front of a real judge and got thrown out that would be VERY bad for republicans. He cant risk it so he delays. Meanwhile the Perry indictment does not delay.

McCrum “served under” Bush but was not appointed by Bush. In fact, he was on the short list for US Attorney for the district under Obama.

And “Republican judges” cannot dismiss lawful indictments with no motion before them.

If you aren’t an idiot, keep reading that leftist agitprop from Politico and you will surely get there.

Horseshit! This “indictment” is doing nothing but HELPING Perry. The longer it lies there reeking of a corrupt political process and rotting in the noonday sun of public ridicule, the better it is for Perry because it proves his point to begin with.