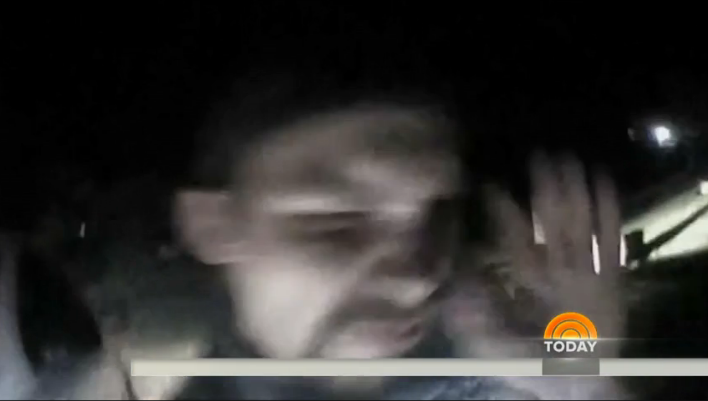 A report from NBC news indicates that police officers in Ferguson, Missouri are being equipped with on-body cameras in the aftermath of the shooting of Michael Brown by Officer Darren Wilson.

The picture above captures an example of footage from this type of camera at the moment an equipped officer (not from Ferguson) was assaulted by a suspect, thus supporting the officer’s responsive use of force against the suspect. (Video below the fold.)

I first came across one of these devices when cough, cough a “friend” of mine was pulled over for speeding in New Hampshire maybe three years ago. (Yes, my “friend” was on his motorcycle at the time.) The officer approached and immediately pointed out that he was wearing the camera, and asked if it was OK for our interaction to be recorded. Naturally, I said yes. I was frankly surprised he asked—or at least went through the motions of asking—for my permission.

This was NOT a major city in New Hampshire, which are tough to come by in the “Live Free or Die” state under the best of circumstances, so even small New England towns have been making use of these cameras for some years now.

Today they are apparently used by over 1,000 departments, and at a cost of about $300, it seems a worthwhile investment for most ANY department. Officers are equipped with body armor to protect them against physical attacks; they ought to be similarly equipped with on-body cameras to protect against false claims of legal liability.

Below follows the NBC video report.

In fact the entire facility should be on camera. No gaps in coverage.

Include AG Eric Holder, the DOJ and the IRS w/on-body cameras

I have had only one conversation with a law enforcement officer (Game Worden) about wearing a camera. He was all for it. He said it protected him more than put him at risk. He said it showed more about civilian bad behavior than law enforcement misconduct. I would guess any “good” law officer would be of the same thought.

I imagine Rick Perry is glad they have those station-house cameras in Texas.
https://legalinsurrection.com/2014/08/rick-perrys-concealed-carry-permit-suspended/

Generally, more information is a good thing, and images are just information.

But information can also be used carelessly, and malignantly. There are some privacy concerns that will have to be addressed in the near future respecting these cameras, and the recordings themselves will have to be tested in courts to establish standards to assure their admission admission of evidence, and not a fiction.

False claims of brutality or misconduct usually get dropped when the complainant sees the vid.

I heard that when some LEOs showed up with body cams to help control the Ferguson riots, and people complained. Of course the same people
complain that police don’t like to be recorded and that it should be legal to record police with or without their knowledge.

On top of that these same people were the ones that were complaining that at work it was discovered that the employer was keylogging, scanning their emails, recording sites they visit.

My beliefs are simple, police should record their actions. But the public should be give them some time to get used to the idea.

JackRussellTerrierist in reply to MouseTheLuckyDog. | September 2, 2014 at 12:19 am

Gosh, I can’t imagine why those fine people of Ferguson would object to the police recording their actions. After all, many Fergusonites were at the ready with their little video devices when Michael Brown got shot. I mean, what could they possibly be doing in a wide-open public place that they don’t want recorded?

Here’s one that you never hear either. We don’t want the police to be militarized so lets send in the MILITARY. Is it just me or is this the most ridiculous thing you have ever heard?

As for cameras I’m concerned that the media is more than willing to twist everything, including facts, into a racial bias against police. Shame on the media!

Every law enforcement officer and private security officer in the country should be wearing a body camera. Upfront costs are actually pretty reasonable and it would save more than the purchase price in litigation expenses.

Press releases suggest these on-body cameras cost $300 each. Not to sound like an ass, but I charge more than that per billable HOUR–which is in line with other serious criminal defense attorneys.

To my mind, that makes these cameras darned cheap. Frankly, hard to see any reason why lawful civilians wouldn’t be well-served by having their own version.

There are several manufacturers who make body cams for law enforcement and civilian use. You’ll pay between $100-$500 depending on the resolution, record time, size, etc… Before our local PD got a grant to purchase cameras for all officers, several of them purchased their own. It’s not a lot of money compared to your reputation and your future career.

“Frankly, hard to see any reason why lawful civilians wouldn’t be well-served by having their own version.”

I feel obliged to note that there are some states, including my home state of MA, in which it requires the explicit permission of ALL parties recorded to make a public recording legal.

Thus, routine on-body camera use by civilians (at least) would be prima facie unlawful, absent permission from every person recorded.

And, yes, people are actually criminally prosecuted in MA for this.

Have they prosecuted any television reporters yet? Hopefully a few of those that covered the aftermath of the Zimmerman shooting are out in the street recording people in MA.

I have had folks comment around were I live about how nice and professional the police seem to be compared to other places, we also don’t seem to have a many…unfounded complaints against the police here.

I credit part of that being owed to the fact that in the Greater metro are all caps have dash-cams and body mics, its not wide spread knowledge but I helped a LEO buddy of mine adjust his one day when his body armor the mice and all the “batman” gear decided to work against him, hehe.

While I share Rags privacy concerns this is kind of a 2 way argument, the cameras protect you as well as the officer. Another point in favor of these devices, I am sure even one has run into a “bad cop” or one that really didn’t need to be a cop with these devices it is a lot easier for administrations to fight the inevitable FOP backlash from firing a cop who needed it, throw out the video and the FOP tends to crawl away pretty quickly.

The way such cameras works right now is seriously flawed. Police officers have to manually turn them on during each encounter with citizens. That could make them overcautious on what to say or do. Often times the verbal threats of overwhelming force is the best mean to control a situation. It creates even more incentive for the police to avoid tough neighborhoods, turning them into no-go zones run by thugs (as has happened many in UK cities).

Officers might also fail to turn them on. The more urgent or expected a situation is, the more likely this will happen. Such failures would be interpreted as implicit admission of guilt for a jury. That’s unfair. Especially so because abusive members of the police force will find ways around the system.

A scheme whereby the cameras work like cockpit voice recorders would be better in my opinion. They would just record continuously, overwriting previously recorded segments every 30 minutes until a serious incident occurs. Even then, the videos shouldn’t be viewed unless a judge presiding on a case decides it’s necessary. The existence of the tape alone should by itself keep witnesses honest. And when they honestly misremember things, finding out mid-trial is more useful as the jury will learn who has a tendency of stating the imagined as real.

The problem with loops is that they enable tampering. Just make sure that the required time elapses before letting IA get the camera and “oops”, it’s all gone. Given the notable history of police “losing” camera footage when convenient I would not trust any camera system that wasn’t always on and cannot be turned off or looped.

I previously read that the Ferguson Police Department already had the body cameras courtesy of a Federal grant (Maybe that is why the cameras cost $300). However, the grant did not include the cost of installation.

I think that was for dashcams which do have an installation cost per vehicle. I don’t think they had body cams.

I’m a fan.
However, I think everyone should have the right to video what’s going on to help protect their innocence.
Like carrying a gun, having a video rolling makes most people more polite.

What’s the latest with this Ferguson mess? All I see is all the anti-cop rhetoric on blogs, forums and youtube vids.

Where are we in this whole thing?