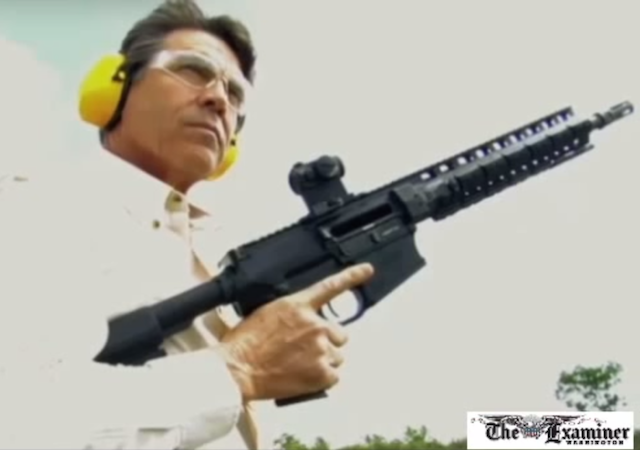 Democrats are still smiling over the recent felony indictment of Rick Perry, even as the Governor’s legal team is taking steps in court to reveal the spurious nature of the charges.

One consequence of the indictment, however, has thrown conservatives in Texas for a loop.

Texas media began reporting last week that because of the charges against him, Governor Perry’s concealed carry license has been suspended by operation of law.

§411.187 of the Texas Government Code states that the Department of Public Safety shall suspend (not revoke, as it has been reported) a concealed carry license if the license holder is charged with the commission of a felony under an information or indictment. The same section of the statute states in part that if the suspension is due to a felony indictment, that the Department shall suspend the license until dismissal of the charges.

While the actual suspension of Governor Perry’s concealed carry license isn’t malicious — you can tell it’s a statutory directive by the use of the word “shall” — it’s sure to pose an inconvenience to a man who has defined himself as a champion of gun rights. According to Reuters, the indictment also limits Governor Perry’s Second Amendment rights in other ways:

Under federal law, he is prohibited from buying guns and ammunition while under indictment for a crime punishable by imprisonment for a term exceeding one year.

“What he has he can use, but he can no longer purchase new stuff because of this felony charge,” said Josh Felker, who runs Lone Star Handgun, a shooting range near San Antonio.

Fortunately, the Governor will not be forced to surrender any guns or ammunition currently in his possession, and is still permitted to carry handguns on property that he “owns or controls.” He won’t be left defenseless, either: the ability of his security detail to carry concealed hasn’t been affected by the indictment.

Not where carry laws are concerned.

This is not limited to Texas, BTW. Most if not all states have similar restrictions on carry by those who have been indicted. I’d like to see that changed to “convicted” and perhaps it will get to that eventually, but for now…stand accused, be disarmed.

I don’t think it is a bad idea to limit those indicted. As long as they are indicted of a felony involving violence ,

“I don’t think it is a bad idea to limit those indicted.”

Yeah, overall, it may be a good idea on balance. Or not.
Certainly in this case, we’re seeing the bad side of the idea.

These laws are not about protecting the public from violent crime.

I can’t address the peculiarities of Texas, but in Massachusetts one of the many things which will prevent you from exercising any firearms possession rights in perpetuity is conviction of the crime of “failure to report a hotel or motel fire”. How’s that for violent crime? And it really doesn’t matter how long it takes them to think this crap up. Once a restriction like that is in there, there it will stay.

There are so many ways that can be misused.

This is such BS.

What especially frosts me (and I know it is legally apples and oranges) is how the Obama Administration has been flaunting laws and the need for a special prosecutor for years. And they are not called on it.

I am losing faith in the justice system.

I’ll take the opportunity to revisit my caution: it is NOT a “justice system”. It should NEVER be called that. It is…on a GOOD day…a legal system. Any “justice” resulting from it is pure coincidence.

It is a very good effort, however, by very imperfect people, to TRY to do each other “justice” in its BEST iterations.

With people like Holder, Obama, and the Texas Deemocrats, it is used perversely, like any system CAN be used.

Just a note on Jim’s comment…yeah, when you are indicted for a felony, you ARE at disabilities. One is having to post a bond to regain your freedom (even a limited freedom). It was pretty much ever thus.

I would add that if you need a practical example of what Rags is saying just think of your average trial where the outcome is decided by “a jury of your peers”. Just ask yourself does the jury make their decision based on “justice” or based on what one side can convince them is the truth.

I have not completely lost faith, but it is eroding.

I do believe, however, that it is worse in most other countries and often much worse.

The Power Of Pettiness – VOTE DEMOCRAT

One good thing is that the law is now widely known – whereas before, most folks probably thought that until you were *convicted* that you retained your full rights.

Until 1968, anyone who was not actually in prison or (perhaps) a nuthouse could buy any sort or amount of weapons or ammo.

How much trouble was there, really?

The start was really the Federal Firearms Act of 1934: restricted machine guns, silencers, sawed-off long arms and so on. The 1968 act was basically to protect US manufacturers and gun stores from mail-order competitors selling war surplus arms. And from the Democratic point of view, to increase gun control on general principles, of course.

What you say is true if you only look at what was on the books. By the 60’s, the 34 law was simply ignored out of existence, for most (white) people.

(Real and lethal bigotry did exist back then, not this foolishness we see today.)

A lesson for legislators to watch for overinclusive draft language, perhaps?

How legal would it be to buy the puir wee man a box of ammo as a gift?

Perfectly. AND it could be a fatal mistake to think Gov. Perry is disarmed.

He isn’t. He just lost the ability to legally carry a concealed weapon IN SOME CASES.

HE has big hulking guys aroiund him carrying guns for him.

Don’t forget the girls, too.

And as long as Perry remains within the state lines of Texas, he has a perfectly legal right to carry a long barrel right out in the open.

Anti-gunners don’t realize that they are not restricting gun ownership whatsoever, they are restricting legal gun ownership. If the law and the process are reasonable I’ll comply, but if not I’m still going to own and carry.

I require defense of self and family far more than compliance with any law that would rob me of the ability to do so.

We all have our red lines regarding our rights and this is one of mine.

If someone wanted to do something evil to them, I was going to have the ability to reach out and touch someone, as the Bell ad used to say.

Does anyone think we’d be having any issues with ISIS if the POTUS could handle a firearm like that? How about problems for Ukraine? Anyone? Bueller?

I think I need that image as a poster on my wall the way my husband had Farah Fawcett on his wall lo those many years ago.

Be a good time for him to just sign an executive declaring the Natural Right to Carry…and tag and bag illegals, but mostly Right to Carry.

He still has his job as Governor. That is in stark contrast to Tom Delay who had to step down as Majority Leader on equally bogus charges by the same prosecution office.

Unfortunately for DeLay the charges weren’t as obviously malicious and spurious as these charges. Also for Mr. DeLay when his charges came out the “New Media” that practice real journalism was not quite the powerhouse nor as wide spread as it is today. One of the reasons these charges were questioned so readily is because of the video of the Drunken DA being put out so quickly and that was thanks to New Media.

How do you deprive someone of a Constitutional right without a hearing?

All ya gotta do is vote Democrat.

Too many people ignore politics, or ignore crooks in office.