With the death of Godane comes the threat of fracture and chaos. 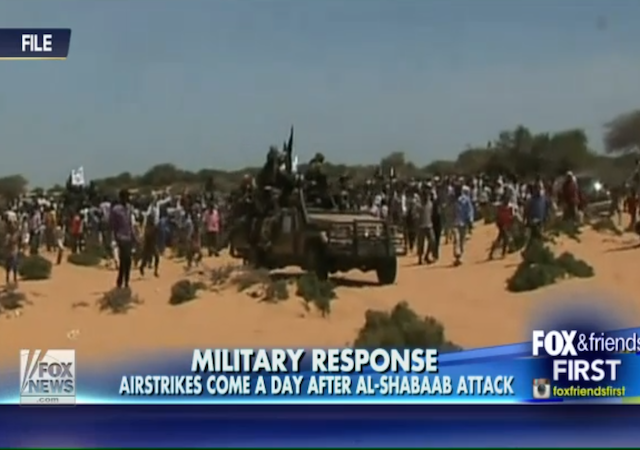 Defense Department officials have confirmed that a weekend drone strike in the Sablale district of southern Somalia has lead to the death of Al-Shabaab co-founder Ahmed Abdi Godane.

From the White House Office of the Press Secretary:

Today, the Department of Defense confirmed that Ahmed Godane, the leader of al-Shabaab, is dead as a result of a U.S. military targeted airstrike in Somalia undertaken over the weekend. Godane’s removal is a major symbolic and operational loss to the largest al-Qaida affiliate in Africa and reflects years of painstaking work by our intelligence, military and law enforcement professionals. Even as this is an important step forward in the fight against al-Shabaab, the United States will continue to use the tools at our disposal – financial, diplomatic, intelligence and military –to address the threat that al-Shabaab and other terrorist groups pose to the United States and the American people. We will also continue to support our international partners, particularly the African Union Mission in Somalia, that are working to support the Federal Government of Somalia build a secure and stable future for the Somali people.

The strike took out five other members of the Islamic militant group who recently took responsibility for an attack on a Mogadishu prison that occurred just prior to the drone strikes. The prison is believed to house some of the region’s most dangerous militants.

According to analysts, Godane was the glue holding the al-Shabaab together. Acting as al-Shabaab’s spiritual leader, he was instrumental in forging the group’s relationship with al Qaeda, and played a large part in helping the group focus its efforts via a better organized secret police force.

Although experts disagree as to whether or not the death of Godane will mean the end of a well-organized movement, the evolution and dynamics of al-Shabaab are proving to be a sobering reminder of just how difficult it is to oust entrenched paramilitary movements, and how long it may take to control and eliminate the influence of ISIS in the Middle East:

Perhaps most significantly, Shabaab succeeded in transforming itself from a local insurgency into a trans-national jihadist group, killing scores of people in its first major attack outside Somalia — a bombing in Kampala, Uganda during the World Cup in 2010.
…
Shabaab has a large inland safe haven and a proven ability to strike throughout its neighborhood. It pulled off a bombing in Djibouti in May 2014, and mounted a devastating large-scale shooting attack at an upscale mall in Nairobi in September 2013. Shabaab is also widely suspected for a series of attacks on Kenyan resort cities throughout 2014.
…
If ISIS follows Shabaab’s trajectory, the group will constantly morph, remaining dangerous even as its fortunes fade and its structure and nature change. And the effort to defeat it will take years of international vigilance, and locally driven reversals that outside players can’t fully predict or control.

The devolution of al-Shabaab, in the absence of a clear, unequivocal change of leadership, would mirror the devolution of order in Somalia at large. If the group fractures, we could see a resurgence of the chaos that has gripped the Horn of Africa for more than two decades.

You can read the full White House statement here:

Minneapolis is in mourning. Keith Ellison is issuing a fatwa against the drone.

“Miineapolis is in mourning.” I rather imagine there is a great wailing and rending of clothing in Dearborn as well. After all, they CAIR deeply!