It used to be the one place you didn’t go. 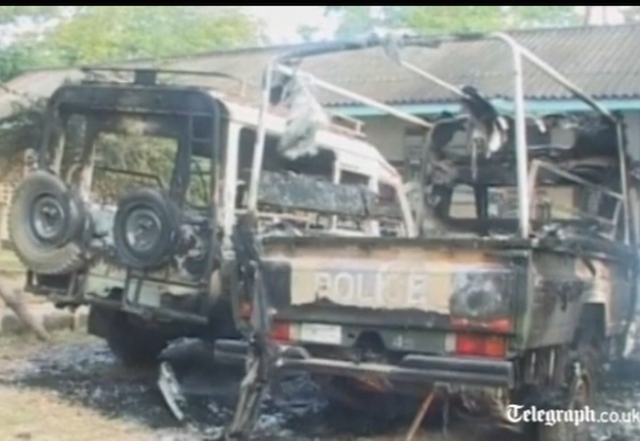 Fox News reports that the United States has executed a series of drone strikes against al-Shabaab strongholds in Somalia. The Pentagon is still reportedly assessing the success of the strike, which was aimed at al-Shabaab leadership:

A senior Somali official, speaking on condition of anonymity, told The Associated Press that a U.S. drone targeted al-Shabaab leader Ahmed Abdi Godane as he left a meeting of the group’s top leaders. The official told AP that intelligence indicated Godane “might have been killed along with other militants.”

The official said that the strike took place in a forest near Sablale district, 105 miles south of Mogadishu, where the group trains its fighters. The governor of Somalia’s Lower Shabelle region, Abdiqadir Mohamed Nor, told The Associated Press that as government and African Union forces were heading to a town in Sablale district, they heard something that sounded like an “earthquake” as drones struck al-Shabaab bases.
…
The U.S. action comes after Somalia’s government forces regained control of a high security prison in the capital that was attacked Sunday by seven heavily armed suspected Islamic militants who attempted to free other extremists held there. The Pentagon statement did not indicate whether the U.S. action was related to the prison attack.

Al-Shabaab claims responsibility for an attack on a Mogadishu prison that occurred just prior to the American drone strikes. The prison, which serves as an interrogation center for the Somali government, is believed to be home to captured extremists. The Pentagon would not confirm that the U.S. took action in response to this attack.

Al-Shabaab, a Somali rebel group with ties to al-Qaeda, first truly came into power in 2006, with the rise of the Islamic Courts and increase in Islamic militias. (The roots of al-Qaeda’s involvement in Somalia, of course, go back much further.) Both the courts and the militias pushed for a total Islamic state, and al-Shabaab contributed to the chaos by smuggling enormous shipments of weapons (from Egypt, Iran, and Syria) through Eritrea, and passing them on to the rebel militias in Somalia. From 2007 to 2009, al-Shabaab and other militant Islamic groups were able to take control of large swaths of the country, and al-Shabaab instituted its own version of Shariah law in the portions it had conquered.

In 2011, al-Shabaab lost control of Mogadishu to African Union forces, but although its influence has diminished, still controls portions of central and southern Somalia. Their goal is still to overthrow the internationally-backed government (if you can call anything happening in Somalia “governing,”) and still attacks government installations and neighboring countries who supply troops to the AU mission.

Earlier this summer, al-Shabaab laid waste to Mpeketoni, a popular tourist destination in Kenya, and warned foreigners to visit Kenya “at their own peril.”

You can read Amy’s 2009 essay on the history and politics of Somalia here.

WHAT??? Islamic State has the Levant in flames and we attacked SOMALIA???

The president is mad.

We take what we can get. Personally it would not have bothered me at all if instead of just sniping a >single< leader as they left the meeting, we had instead pasted the entire meeting place with 2000 pound bombs, and then sowed the place with salt.

Too bad a couple air to ground mavericks didn’t crash the party at our Libyan embassy.

But Obama is polite and will wait for an invitation, and probably warn them first in any case. Maybe Egypt will do it.

I suppose AU forces invited us into Somalia. The Ukraine has invited us to supply them with more arms, but Obama wants to stay flexible for his buddy Putin. So the Ukraine gets socks. Well, they get tanks, but they have Russians in them.