Who did the Washington Post endorse for president in 2012? 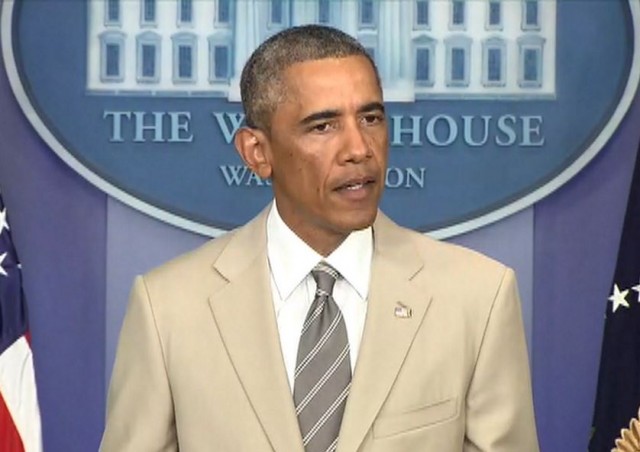 A new editorial from the Washington Post takes an unusually sober look at President Obama’s foreign policy chops and his non-reaction to the world that’s burning around him:

PRESIDENT OBAMA’S acknowledgment that “we don’t have a strategy yet” in Syria understandably attracted the most attention after his perplexing meeting with reporters Thursday. But his restatement of the obvious was not the most dismaying aspect of his remarks. The president’s goal, to the extent he had one, seemed to be to tamp down all the assessments of gathering dangers that his own team had been issuing over the previous days.

This argument with his own administration is alarming on three levels.

The first has to do with simple competence. One can only imagine the whiplash that foreign leaders must be suffering. They heard U.S. Ambassador to the United Nations Samantha Power denounce Russia as “today . . . they open a new front . . . Russia’s force along the border is the largest it has been . . . the mask is coming off.” An hour later, Mr. Obama implicitly contradicted her: “I consider the actions that we’ve seen in the last week a continuation of what’s been taking place for months now . . . it’s not really a shift.”

If you read on from there, you’ll notice that the editors use the word “disturbing” twice to describe Obama’s response to the situation in Ukraine and the rise of ISIS.

This is quite a departure from the Post’s endorsement of Obama in 2012.

Here’s what they wrote approximately two years ago:

MUCH OF THE 2012 presidential campaign has dwelt on the past, but the key questions are who could better lead the country during the next four years — and, most urgently, who is likelier to put the government on a more sound financial footing.

That second question will come rushing at the winner as soon as the votes are tallied. Absent any action, a series of tax hikes and spending cuts will take effect Jan. 1 that might well knock the country back into recession. This will be a moment of peril but also of opportunity. How the president-elect navigates it will go a long way toward determining the success of his presidency and the health of the nation.

President Barack Obama is better positioned to be that navigator than is his Republican challenger, former Massachusetts governor Mitt Romney.

Then comes this part, emphasis is mine:

Even granting the importance of the fiscal issue, a case might still be made for Mr. Romney if Mr. Obama’s first term had been a failure; if Mr. Romney were more likely to promote American security and leadership abroad; or if the challenger had shown himself superior in temperament, capacity and character. In fact, not one of these is true.

OVERSEAS, TOO, there were successes and failures. Mr. Obama’s administration vigorously pursued al-Qaeda and tracked down its leader, Osama bin Laden. He supported a popular uprising against Libyan dictator Moammar Gaddafi. He recognized the importance of bolstering allies in Asia against Chinese bullying, and he opened trade talks with Asian nations intended to encourage an alternative to China’s state-sponsored, often corrupt capitalism.

One has to wonder if the editors of the Washington post would choose differently today.

One has to wonder if the editors of the Washington post would choose differently today.

One has to wonder who they were seeing when they wrote that drek – ’cause it wasn’t Obama!

One has to wonder if they are delusional, or were on something when writing that pap in 2012.

One has to wonder who they were seeing when they wrote that drek – ’cause it wasn’t Obama!

In 2012, the WaPo editors were still bound to the party line, thinking – as most liberal organizations still do – that the American economy and the Pax Americana were made of such stout stuff that they could be mindlessly taken for granted for years to come. They’d have recommended any Democrat in the same words. So yes, they were looking at Obama, and gloating.

Only now, after SIX YEARS of misgovernment which the media palace guard has finally, at long last, begun in teeny steps to recognize, can they allow themselves to see the real Obama instead of the ikon which was painted for them before 2008. The wool is rotting off their editorial eyes – and the left is beginning to run for cover.

JackRussellTerrierist in reply to DINORightMarie. | September 1, 2014 at 2:04 am

WaPo left out Benghazi and obamullah’s efforts to replace Mubarak with islamofascists.

Barack Obama is a lame duck, so the Washington Post is free to be somewhat more accurate in its descriptions of his actions than it was in the past. Once the next Democratic candidate is selected, the Post will go back to using rosy misdescriptions of the candidate and spiking unfavorable stories.

The Washington Post is not a reliable source of political news that they think might affect a presidential election.

I read Ombudsman articles for at least 3 presidential elections in a row where the Ombudsman admitted that the Washington Post reportage was inadequate. They are not biased: they are partisan.

I agree. I also believe the WaPo is trying to open up some space between themselves and the floundering Obama administration so as not to get sucked under along with their god if he really does down hard. If the public sours on Obama, they might also sour on Obama’s sycophants in the media as well.

In 2015-16 you will see the WaPo – and the rest of the Democrat/media complex – pose as Washington outsiders, trying to pretend they had nothing to do with the screw-ups of the last several years. Expect a lot of “Washington is broken” stories from the WaPo, in an effort to distract you from the fact that their lying partisanship and stupidity is what broke Washington in the first place.

Obama should have remained a community organizer in the same drain as a Jesse Jackson and Al Sharpton.

One minor point: While Obama’s proclamation regarding his lack of a strategy towards combating ISIS reflects much upon him, also realize that as long as the USA economy can still produce enough to keep providing him with the perks and benefits to which he feels he is entitled, what’s the worry?

Everything’s will be just fine, so spoke Obama. Worry? Who, him?

I’m surprised that anyone would be surprised. I guess WAPO has been practicing that “willing suspension of disbelief” that Hillary mentioned.

That that was Rand Paul not Hitlary.

Perhaps the President should go back to having his TelePrompTer answer for him. It was hard to miss the fact that he already knew what question Chuck Todd was going to ask, as well as those of all the other Journos in the room.

Obamullah is a PINO – president in name only. Referring to that carpet-bagging scum as “president” is an insult to all who held the office before him, with only a couple of exceptions. Calling him “president” also makes me want to heave, as does the sight of him.

This whole last paragraph contains a bunch of absurdities:

OVERSEAS, TOO, there were successes and failures. Mr. Obama’s administration vigorously pursued al-Qaeda and tracked down its leader, Osama bin Laden. He supported a popular uprising against Libyan dictator Moammar Gaddafi. He recognized the importance of bolstering allies in Asia against Chinese bullying, and he opened trade talks with Asian nations intended to encourage an alternative to China’s state-sponsored, often corrupt capitalism.

In supporting the rebellion in Libya Obama replaced an ally with an unknown. It looks to be Al Qaeda taking over thanks to Obama’s masterly foreign policy.

After OBL was killed Obama did everything possible to snatch defeat from the jaws of victory. His primary problem was in his desperation to garner acclaim he prevented us from exploiting the captured intelligence by announcing the death on the following day. By childishly telling the world that it was SEAL Team 6 he put a target on their backs and many of them died because of that. In giving a top secret lecture to the producers of a movie that he thought would look good he betray our country.

What he did in regard to OBL was the most treacherous, narcissistic act of his tenure, even worse than Benghazi, imo.

Most liberals were taken in by the smooth talking black charlatan …. because he is black. Even got a Nobel after 2 weeks.

Liberalism is a mental disease. Those fools own this.

The notion that Romney has not “shown himself superior in temperament, capacity and character” to Obama is so utterly bizarre, you’d have to be insane or willfully delusional to believe it.

After that howler, how could anyone think the WaPo editorial board is remotely sane?

Good Lord. When was the last time Barack Obama teamed up with the TOTUS for one of those awesome inspirational speeches ?

“On one end of the spectrum, we’ve heard the implication that my candidacy is somehow an exercise in affirmative action; that it’s based solely on the desire of wide-eyed liberals to purchase racial reconciliation on the cheap. On the other end, we’ve heard my former pastor, Reverend Jeremiah Wright …” — March 18, 2008, Philadelphia, Pennsylvania

Apparently, there was too much attention to the wrong end of the spectrum.

[quote]One has to wonder if the editors of the Washington post would choose differently today.[/quote]

No, they wouldn’t. They are partisan to the core, and would rather see the world burn around them than allow someone who might possibly not be a hyper leftist run the country.

At this point, it’s every man/woman for themselves.

If ISIS attacks along the Southern border after an Obama “executive
action” on immigration and his refusal to enforce current immigration
law to have an “open border,” the Democrats will be toast.

The clock is ticking …

I bet the DNC wishes the election were today so they could limit their losses.