British member of parliament beaten a few weeks after declaring his district an Israel and Israeli-free zone. 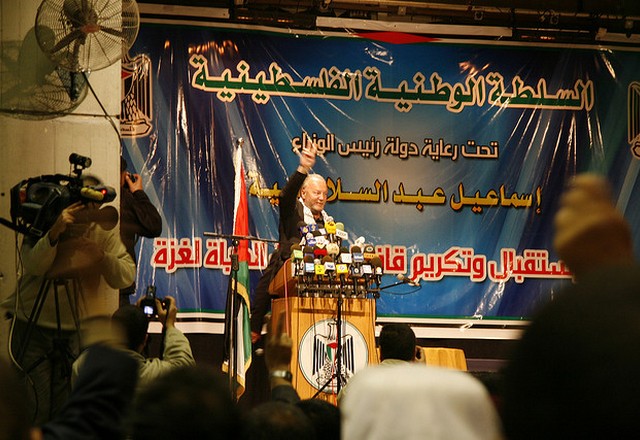 The Bradford West MP was released from hospital on Saturday morning having suffered a suspected broken jaw and rib as well as facial bruising. Neil Masterson, 39, has been accused of shouting about the Holocaust and attacking him.

The attack, it is claimed, was related to comments Galloway recently made about the conflict in Gaza. The MP was posing for pictures in Notting Hill in west London when the attack took place. He was treated overnight at St Mary’s hospital.

Police said he was charged with the assault an Galloway and another man. A spokesman said Masterson was due to appear at Hammersmith magistrates court on Monday.

The suspect is not Jewish.

A few weeks ago Galloway declared Bradford to be an “Israel-free zone.”

Earlier this month the left-wing Respect MP said that goods, academics, and tourists from the “illegal, barbarous, savage state that calls itself Israel” were not welcome in Bradford because of the country’s actions in Gaza.

Galloway’s comments have already attracted attention from the police, and on Monday, in response to the MP’s statement, Israeli ambassador Daniel Taub made a special trip to the Yorkshire town.

Israeli ambassador to the United Kingdom, Daniel Taub, responded by travelling to Bradford in defiance.

The pro-Israel world, despite its distaste for Galloway, has not endorsed the violence against him.

Problem with attack on #Galloway: a) violence is wrong b) self-defeating: the man is his own worst enemy whenever he opens his mouth.

This puncher is a disgrace. I wish George Galloway a speedy recovery, and, in due time a complete political demise. http://t.co/CkMhxn0P4D

Galloway has a long history of anti-Israel, if not anti-Semitic agitation. In addition he has had a soft spot for some the the most brutal dictators of our time. Some of it has been covered at Legal Insurrection going back to 2009. An anti-Israel columnist at The Guardian cited Galloway as an example of someone who crossed the line. Galloway supports the BDS movement. He mourned the death of Venezuelan dictator Hugo Chavez. Last year Galloway stormed out of a debate when he found out that his opponent was Israeli.

"George Galloway's most memorable moments"…it is like an album from hell pic.twitter.com/0c4w6f8NCR

Why isn’t the attacker identified, and who is it who is claiming that the attack was politically motivated?

“Neil Masterson, 39, has been accused of shouting about the Holocaust and attacking him.” So he’s identified now, but he wasn’t when I was looking over such stories last night.

As for who put out the word this was about Holocaust stuff, who’s to say. A political motive would make this pretty bad. My best friend insisted to me that it was just one guy annoyed by an idiot for non-political reasons. Hope so. Beating up elected politicians for political reasons is a really bad idea.

Hmmm. Let me get back to you on that last bit, eh?

“Beating up elected politicians for political reasons is a really bad idea.”

I can’t think of a better reason.

I am becoming convinced that these sorts of beat downs will be a necessary strategy in winning our world back from the progs.

I don’t understand how a politician can make such a declaration and expect it to have the force of law. Was Galloway actually intending to enforce his ban, or was he just making a theatrical gesture for its propaganda value? How did the people who live in his district respond to his anti-semitic declaration? (I seem to remember reading, long ago, that Galloway’s district has a large Muslim population, but I am not finding a reference to prove or disprove that claim today.) How did the City Council (or whatever the local ruling body is) and the judiciary view his blanket ban on a religious or ethnic minority that has full legal standing in the UK?

perhaps he can claim the Texas Alibi: “He needed an ass whoopin'”

“Acquitted based on the victim’s lifetime record”

Texas’ juries are known for nullification. The founders of our Texas Republic were farsighted, indeed. I doubt if the booger eatin’ socialists in the UK allow a jury such power.

JackRussellTerrierist in reply to TrooperJohnSmith. | September 1, 2014 at 1:41 am

Thanks for that visual.

Is there something in our state constitution, or our state legal system, that makes jury nullification easier here?

Or is it perhaps attributable to the tough, ornery people that settled this state to begin with? Bienvenidos Gringos! Por Favor! Please come act as a human shield between us and the Comanches and Apaches! We’ll throw you a few acres of hard scrabble land in exchange!

Didn’t US troops find evidence Galloway was being paid by Saddam? That should have been enough to discredit him – but then again, there’s plenty to discredit Sharpton and Clinton, yet they are stars of the Left.

I don’t care. As long as he isn’t Jewish, I salute the guy who did it.

Religiously-aggravated? Anti-Semitism is a religion?

Has someone started a legal defense fund yet?

I for one rejoice in Galloway’s being punched in the face and I condemn those who condemn the incident. It would be like William Joyce “aka “Lord Haw-Haw” having his jaw broken.

Ref:
Ben Judah @b_judah
This puncher is a disgrace. I wish George Galloway a speedy recovery, and, in due time a complete political demise.

I don’t condone violence but the damage has already been done and apparently he will recover but why wish him a speedy recovery…don’t you think he should suffer just a bit…a bit over six months is speedy enough for the likes of him…and I wouldn’t fret if it took a bit longer maybe he’ll get a rude awakening.