Guardian Columnist Calls Out The Anti-Israel Left, But Not His Own Paper

Guardian Columnist Calls Out The Anti-Israel Left, But Not His Own Paper

Posted by William A. Jacobson Wednesday, February 4, 2009 at 10:42am 0 Comments
More Sharing Options 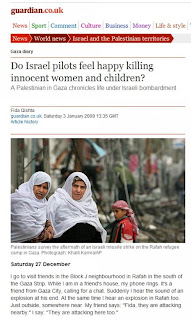 The Guardian newspaper in Britain devotes endless articles and op-eds to criticising Israel. The paper is worth reading if only to keep up to date on what the anti-Israel left is thinking. Few if any columnists are more critical of Israel than Jonathan Freedland. Yet Freedland has a great column calling out his fellow anti-Israel leftists for their failure to speak out against the anti-semitism sweeping Britain.

While making the obligatory observation that of course Israel is wrong on Gaza and its treatment of Palestinians, Freedland observes that the leftists who fought so hard against anti-Islamic sentiment in the aftermath of 9/11 and the London bombings, are silent as to anti-semitic sentiment in the wake of Gaza. Worse yet, according to Freedland, is that the frequent comparisons of Israel to Nazi Germany feeds anti-semitic violence:

Those who in 2001 or 2005 rapidly spoke out against guilt by association have been mute this time. Yet this is no abstract concern. For British Jews have indeed come under attack….

Among them are attacks on synagogues, including arson, and physical assaults on Jews. One man was set upon in Golders Green, north London, by two men who shouted, “This is for Gaza”, as they punched and kicked him to the ground. Blood-curding graffiti has appeared in Jewish areas across the country, slogans ranging from “Slay the Jewish pigs”, and “Kill the Jews”, to “Jewish bastardz.” Jewish schools have been advised to be on high alert against attack. Most now have security guards on the door; some have a police presence.

Freedland particularly singles out the always-despicable George Galloway, the enfante terrible of the anti-Israel, anti-American left:

Take last month’s demonstrations against Israel…. [a Guardian reporter] heard the cry not only of “Down with Israel” but “Kill Jews”. An anti-war protest in Amsterdam witnessed chants of: “Hamas, Hamas, Jews to the gas.”

At the London events, there were multiple placards deploying what has now become a commonplace image: the Jewish Star of David equated with the swastika. From the podium George Galloway declared: “Today, the Palestinian people in Gaza are the new Warsaw ghetto, and those who are murdering them are the equivalent of those who murdered the Jews in Warsaw in 1943.”

Now what, do you imagine, is the effect of repeating, again and again, that Israel is a Nazi state? Even those with the scantest historical knowledge know that the Nazis are the embodiment of evil to which the only appropriate response is hate. How surprising is it if a young man, already appalled by events in Gaza, walks home from a demo and glimpses the Star of David – which he now sees as a latter-day swastika – outside a synagogue and decides to torch the building, or at least desecrate it? Yet Galloway, along with [former London Mayor Ken] Livingstone, who was so careful in July 2005, did not hesitate to make the comparison (joined by a clutch of Jewish anti-Israel activists who should know better).

While Freedland’s condemnation of the anti-Israel left is spot on, one thing is curiously missing: Recognition that The Guardian contributes to this atmosphere through its relentless and largely one-sided coverage of Israel. All you need to do is to read headlines in The Guardian to understand the editorial bias:

London’s Guardian newspaper is notorious for its anti-Israel bias. Apparently indifferent to journalism’s code of ethics, many Guardian reporters tend to value advocacy journalism over unembellished fact. For example, correspondent Chris McGreal routinely uses his reports from the Middle East to blame, deprecate, and attack Israel and its leader, presenting Palestinian claims as fact. His articles, with such titles as “The Real Obstacle to Peace is Not Terror, But Sabotage by Sharon-Backed Army” (6/20/03), “Caged” (9/3/03), “Israel’s Deadly Thirst” (1/13/04), ” and “Land Grab in Gaza Casts Doubt on Pullout” (2/27/2004) are frequently reprinted on Palestinian websites.

An editor at The Guardian has admitted the newspaper’s anti-Israel bias, including distortions of Israeli actions in Jenin and elsewhere, which the Guardian reporter compared to a Holocaust:

Alan Rusbridger, the Guardian’s editor, was speaking together with former Haaretz editor David Landau about reporting in the Middle East to a crowd of about 600 people when he responded to a question from the audience about the Israeli incursion into Jenin in April 2002.

In response to his publication’s coverage of the operation, Rusbridger said it was unfair to blame the reporter. Following Operation Defensive Shield in 2002, the Guardian’s editorial commented in its April 17 edition that: “Israel’s actions in Jenin were every bit as repellent as Osama Bin Laden’s attack on New York on September 11.”

“I take full responsibility for the misjudgment,” Rusbridger said.

And during a response to a later question, he apologized for the editorial on Jenin – unprompted.Rusbridger was also taken to task by Landau over his publication’s explanation of the word “shoah” in an edition last week, in reference to Deputy Defense Minister Matan Vilna’i’s comments that the Palestinians would be “bringing a greater shoah because we will use all our strength in every way we deem appropriate, whether in air strikes or on the ground.”Landau said that he could not accept that the Guardian would choose to use a headline with the word “Holocaust.”

While playing lip-service to avoiding inflammatory rhetoric, The Guardian (including the editor mentioned above) regularly compares Israel to apartheid South Africa. This comparison, promoted by anti-Israel academics and Islamists is yet another libel which contributes to anti-semitic violence.

A good example of how The Guardian whips up anti-Israeli and anti-Jewish fervor is a recent article titled “Do Israeli Pilots Feel Happy Killing Innocent Women and Children.” This is anti-Israel propaganda masquerading as reporting. As one commentator notes, perhaps the better headline would be “Do Hamas members feel happy when they purposely leave their children inside buildings that Israel has informed them in advance they’re going to bomb?”
Freedland deserves to be commended for his column today. But he should remember that people who live in glass houses shouldn’t throw stones. And when it comes to anti-Israel bias which contributes to anti-semitic violence, The Guardian is a glass house.