Rubio on immigration: Executive action is the “single greatest impediment to moving forward.”

Rubio on immigration: Executive action is the “single greatest impediment to moving forward.”

And we thought amnesty was the big stumbling block. 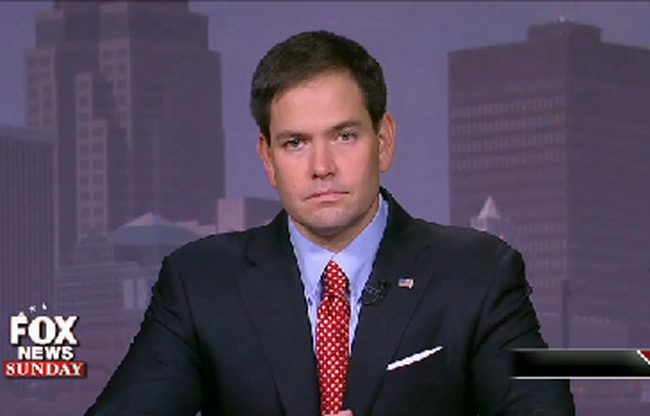 Senator Marco Rubio appeared on FOX News Sunday today and was asked some tough questions by host Chris Wallace with regard to the border and immigration.

While Rubio clearly articulated a three point plan to deal with the problems, he pointed out that the biggest obstacle at the moment is the president.

Marco Rubio: Obama is the ‘greatest impediment’ to immigration reform

“That would be one step forward but three steps back,” Rubio, an immigration reform supporter, said on “Fox News Sunday,” calling the threat of executive action the “single greatest impediment to moving forward.”

Obama is expected to reveal his long-awaited unilateral actions around Labor Day. The White House is weighing whether to expand a previous order that deferred the deportations of younger illegal immigrants to millions of other people living in the U.S. illegally.

Watch Rubio’s appearance on FOX below.

Rubio was an eager to change his position after he was elected. The Nancy-boy can kiss my ass.

NOOOOOoooooooobody trusts Pres. ScamWOW to do right, so they are not going to trust a new law to his administration.

That just makes sense. So does a grass-roots movement to get him to resign. But he has to take “skinny-dip” Biden with him. Was there ever a bigger dip…???

president Rspect has been warned seriously twice in the last two days of his lawlessness . I think Barry better think real hard .What am i saying ? This is King God of the World. I’ll sit back and see what happens .
Rubio is my Senator. I supported and voted him in. He sounded and looked good in the Fox interview.
I do hope Obama ,Holder & Jarrett come to their sense’s .
btw: Where did the $8000 tour money come from ?

I voted for Rubio because the alternative was Crist. ‘nuf said?

I do hope Stephen Frank Editor of California Political News and Views don’t mind but I think Americans should be aware of what is NOT being released by the Obama national media and certainly not this administration, which is entirely to blame for this illegal alien invasion. President Obamas “Catch and Release” program is exactly that? As far as I am concerned in my personal opinion, he has violated our sovereignty. He and he alone, deferred millions of teenagers under his DACA policy from deportability if they joined the military or demonstrated they would stay in school. The US Border Patrol Supervisors had been sent a directive by Homeland Security not to detain illegal aliens. The word resounded around the world and now our Southern border is pummeled by millions of unaccompanied minors, teenagers with ages ranging from 13-18, pregnant females and whole families.

Its almost nine years after terrorists murdered 2,751 people on Sept. 11, 2001, the U.S. is still facing a major threat as hundreds of illegal aliens from countries known to support and sponsor terrorism sneak across the U.S.-Mexico border.

Incidentally their has been a noticeable arrival rate of illegal aliens from Iran, Jordan, Lebanon, Syria, Egypt, Saudi Arabia, Kuwait, Pakistan, Cuba, Brazil, Ecuador, China, Russia, Yemen, Albania, Yugoslavia and Afghanistan – all apprehended in the, Rio Grande Valley, South Texas sector alone, causing border chaos. Based on U.S. Border Patrol statistics, there were 30,147 OTMs apprehended in fiscal year 2003; 44, 614 in fiscal years 2004; 165,178 in fiscal year 2005; and 108,025 in fiscal year 2006. Most were caught along the U.S. Southwest border. A smuggling ring in San Antonio has been bringing people from East Africa (does not the Ebola virus originate from here?) across the border with Mexico and a ring in Chaparral, New Mexico has been smuggling Iraqis across it.

The Texas border – specifically the McAllen area – outpaces the rest of the nation in OTMs (other than Mexicans) and aliens from “special-interest countries.”

Mr. Stephen says: A few weeks ago there was an outbreak of TB and chicken pox among the illegal aliens held at the Port Hueneme Naval base. In three weeks those kids will be in class rooms infecting 8,000 children in the local school district—maybe they have already escaped from Obama custody and are at the park, serving burgers, working at a car wash—somewhere in the community infecting us.

Now another holding facility—where kids are disappearing as planned—needs a lock down.
“A few days ago we shared the Washington Times story about a facility in New Mexico being closed due to a Chicken Pox outbreak. However, a little more research into the Artesia, New Mexico, Detainment Center and you can find out a week prior a little-known CDC/DHS inspection found there were 89 (eighty-nine) cases of Tuberculosis identified in the exact same facility.

Barack Obama is afraid that even Democrats would revolt if they knew that besides a financial disaster, an education crisis, he has imported a health care crisis. As the extent of the health crisis caused by the importation of illegal aliens becomes more known, Democrats taking money raised by Obama will be forced to give the money back. The November elections can be a meltdown for the Democrat Party.

If, according to the reporter and city council member, no detainee through 7/22/14 “has been found to have any contagious disease“, then why did the entire facility get quarantined five days after they began screening (x-rays) for “active TB” ?
Think about it.
…And another coincidence. The same day as the media reports the facility was quarantined, President Obama signs an executive order allowing for the detainment and quarantine of those showing signs of acute respiratory disease, ex: Tuberculosis.

On Thursday, Barack Obama signed an executive order that allows for the apprehension, detention, or conditional release of individuals with certain severe acute respiratory diseases, not including influenza. Theexecutive order modifies one signed in 2003 by George Bush that allowed for the detention and quarantine of those with SARS.

“Severe acute respiratory syndromes, which are diseases that are associated with fever and signs and symptoms of pneumonia or other respiratory illness, are capable of being transmitted from person to person, and that either are causing, or have the potential to cause, a pandemic, or, upon infection, are highly likely to cause mortality or serious morbidity if not properly controlled,” the executive order reads. “This subsection does not apply to influenza.” (link)
Our hunch, our reasonable hunch based on empirical evidence, is the quarantine was a direct result of positive x-ray scans for ACTIVE TB.
Further evidenced is available because the CDC, DHS and ICE have been studying TB contagion rates in illegal aliens for several years. And not coincidentally guess which countries have the highest rates of TB virus:

Only candidates of the National TEA PARTY, moderate Conservatism will enforce immigration laws and follow the dictates of the Rule of Law, the Federal Registry and the US Constitution. We need National TEA PARTY candidates who will abide by the oath of allegiance, our sovereignty to honor the Rule of Law and the vision of our founders, the US Constitution. Check this site that has the phone Numbers and Mailing Addresses of Members of Congress at: http://www.contactingthecongress/ to demand an end to illegal immigration and the dismantling of our laws, sovereignty and military, which is protection against our enemies. This is the number for the central switchboard for Congress to address your grievances at 800-224-3121.

We must Block amnesty for illegal aliens, which is entirely up to us—grassroots America—the little vulnerable populace. You can also get alternative—NO SPIN– news about issues at One-America cable TV News http:/www.oann.com/ and TeaPartypatriots.org/ teaparty.org You might also like to try (AliPac) http://www.alipac.us/ Another website worth seeing is http://www.numbersusa.com