Ask and you shall receive, Internet. 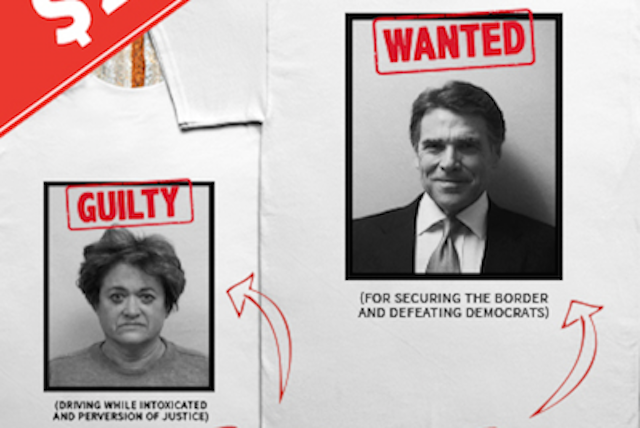 If you were one of (I’m assuming) thousands who saw Texas Governor Rick Perry’s mugshot and thought, “that oughta be on a t-shirt,” then today is your lucky day.

Perry’s “RickPAC” has put that mugshot on a t-shirt, along with that of embattled Travis County DA Rosemary Lehmberg, whose mishandling of the state’s Public Integrity Unit is the source of the current legal action against the Governor. Perry hasn’t let the lawsuit slow his momentum, however, and since his booking has maintained his travel schedule, sending him to key events in New Hampshire, South Carolina, Iowa, and Washington D.C.

Perry’s approach to his legal troubles has done a good job highlighting the weakness of the special prosecutor’s legal arguments against the Governor’s decision to veto funding for Texas’ Public Integrity Unit, and even liberals admit being shocked at the decision to indict.

Governor Perry’s masterful handling of his indictment has some analysts wondering whether or not this could help Perry’s chances in a run for the Presidency:

Texas Gov. Rick Perry’s well-coiffed and grinning mugshot has made him the new poster boy for political damage control — and might even boost his profile for a 2016 presidential run.

The flattering photo, which has been compared to a GQ headshot, became the talk of Twitter and ignited a firestorm of fawning media coverage Wednesday.
…
Terry Hemeyer, a communications professor at the University of Texas who specializes in public relations and crisis management, said that Mr. Perry made the best of a bad situation.

“The whole event is a negative event but it is less negative if he does this,” he said. “He controlled the fact that he went in there and how he handled himself You need to turn yourself in, cooperate as much as possible because the alternative is not good.”

Others, though, remain skeptical about the Governor’s ability to rebound his image in the wake of his disastrous 2012 campaign:

Dante Scala, political science professor at the University of New Hampshire, said the indictment “probably raises (Perry’s) profile coming into the state” but he still has a lot of work to do in terms or rebuilding his brand after 2012.

“It’s going to take more than one visit to offset all of that,” Scala said. “He’s got to go through the painstaking task of reintroducing himself to activists, talking to them one-on-one and start to persuade them that he’s the politician that a fair number of people thought he was.”

Whether or not the indictment and ensuing legal battle proves to be too much for Perry’s budding presidential campaign remains to be seen, but for now, Perry seems to be making buckets of wine from Dems’ sour grapes.

RickPAC is selling the shirts in exchange for a $25 donation.

My Governor is very good at this type of thing, a fact the Austin crowd should have remembered.

“When Life gives you lemons, punch Life right in the solar plexus, hold its head back and make it eat those damn lemons.”

Things looked good for Tom Delay at the mug-shot stage of his indictment on ridiculous charges, too. We know how that turned out, finally, but only after a long legal battle, huge legal bills, a loss to Republican leadership, and a conviction that was ultimately overturned.

*Well, _I_ remembered it, and it did make me smile.

I wonder where MADD is? They are sort of like NOW or Code Pink in that they are really only left wing organizations and only come out when they can support a leftist. They should have a Texas wide campaign to help Perry get this menace to all off of the roads but they won’t. Then there is NOW. They also won’t do anything since the perp is a drunken woman. If she had just had an abortion then Planned Parenthood would be by her side. Can’t the people of Texas see what is going on? Do they want this monster of a DA to keep her office?

The founder of MADD left when she realized that the organization had succeeded with it’s original purpose* and was now being used to push for prohibition.

* Increased penalties and removing repeat offenders from the road.

Noticed something interesting on the web page for the t-shirts.

They say that Federal election law REQUIRES THEM to obtain your occupation and name of employer when you donate.

Can someone explain to me the rationale for that and/or how come people aren’t outraged that the Gov. is demanding that information about them?

Or does everyone lie and put something down regardless of fact?

The State funded Public Integrity Unit is in a local Texas District Attorney’s Office. Yet the unit is charge (apparently through State Law) with oversight of State Officials. This raises an interesting 14th Amendment Equal Protection issue. It is an issue that can be litigated by citizens in a more conservative part of Texas.

Why should only citizens of Travis County be given the privilege of electing an official who performs a State function? It seems that it would require a State-Wide Election.

In effect everyone outside of Travis County is being disenfranchised. There may even be potential Voting Rights Act claims.

It’s extremely disappointing that Perry isn’t being given credit for fighting government abuse by withdrawing funds from the abusers. We’re starving for examples of how to do that, but Republicans want to talk about anything but. It’s almost as if Republicans really don’t want to reform government.