Basically the same Egyptian proposal rejected by Hamas over two weeks and 1000 lives ago. 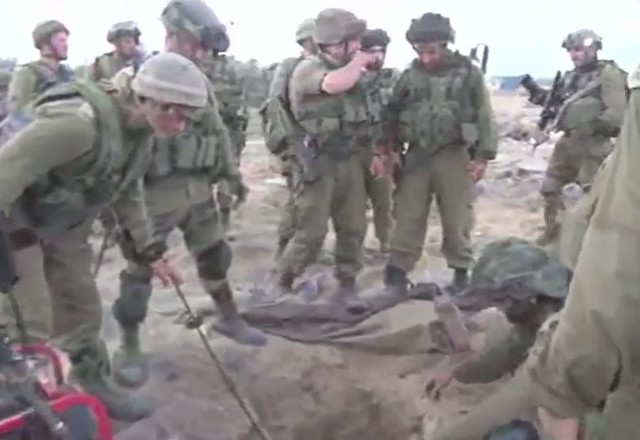 Breaking reports out of Egypt indicate that the various “Palestinian factions” have agreed to a 72-hour unconditional truce.

This was the original Egyptian proposal which was rejected by Hamas more than two weeks and over 1000 lives ago.

Israel reportedly will agree, as it has multiple times before. Let’s see if Hamas again uses the truce as an opportunity to launch more surprise attacks.

Palestinian factions agree to 72-hour truce, to begin at 8 A.M. on Tuesday http://t.co/8LsUNv9dTb

Breaking: Israel will accept #Egypt's ceasefire proposal for 72 hours. A delegation will fly to #Cairo

Idiots! They saw what happened just a few days ago when they accepted the very same deal. Why would they accept it again?

If this cease-fire collapses the same way as the last one, with a raid-attack from the “Palestinians” in Gaza attempting to kill/capture Israeli soldiers, would you be ready to firebomb Gaza then?

Jesus told the struck to turn the other cheek in order to make the person who struck you treat you as an equal (you can’t backhand with your right hand against a left cheek, and to hit with an open hand would have confirmed status as equal in ancient times).

Here, that doesn’t make sense. HAMAS cares only for destruction, regardless of “status.” As I said before, it’s time to bring the fight they want to have TO THEM.

Repost from the last thread:

I remember during the 1982 invasion of Lebanon, how every day the UN called for another ceasefire, Israel would immediately agree and comply, and then the next day the fighting began again, after the PLO had time to regroup and rest. I remember the holy Lubavitcher Rebbe screaming at the stupid Israeli government for accepting all these ceasefires. He said Haig’s resignation had given them a very narrow window of opportunity to destroy the PLO, and they needed to get on with it, invade Tyre (rather than going around it as they did), get the mission done, and get out of there before a new Secretary of State could be confirmed. All those ceasefires not only gave the enemy time to recover and prepare for more fighting, but dragged the whole thing out to where it would become impossible to achieve. I recall him admonishing Simcha Erlich, who was acting Prime Minister at the time, that if he loved his seat so much he should take it home and sit in it there to his heart’s content, and let the army do its job. How prophetic the Rebbe proved to be, as he usually did.

I’m not holding my breath, but Israel was saying that they want Egypt to mediate, not US. Yet Kerry had to stick his chin there.

And I thought Israel was serious about winning this.

What’s your working definition of “winning,” as applied to this conflict?

Israel wants to exist without continuous threats to that existence. If Hamas called off the war and ceased all hostilities – for real – then that would be a win for Israel.

If Hamas refuses to end hostilities and continues to fire rockets, abduct Israelis, and call for the destruction of all Jews and the Jewish state, and Israel defeats them through military action, then that would also be a win for Israel. It would be less ideal, and result in a tremendous loss of life on both sides, but it would be a win.

Israel is not gunning for genocide; they do not want to exterminate all Palestinians living in Gaza. They just want to be left alone. Any result that allows them to peacefully exist is a win for Israel and a loss for Hamas.

And Hamas understands that, so I don’t expect them to let that happen.

The time for not being willing to commit Genocide to win has long since past. As I said in a previous thread: War is about horror and crushing your enemies until they throw down their weapons and adopt YOUR way of life.

It’s time to firebomb Gaza from 10K feet until the “Palestinian” people throw down their arms and agree to go ANYWHERE but the West Bank and NEVER return. Anyone who refuses to surrender and vacate is shot. No Quarter. No Mercy. Shot on sight, because at that point either you are a terrorist, or you are a looter taking advantage of the mass egress.

Victory, at this point, is crushing the people of Gaza to thoroughly that they can NEVER so much as raise another STONE against an Israeli soldier.

last one last about 90 minutes, maybe this one will make it tom 2 hours.

Hamas, according to it’s Covenant, can only agree to a hudna (pause to re-load). If the Gazans want peace, they will have to repudiate Hamas.

See above re Genocide.

Why not accept these agreements? Every time they accept a ceasefire and the Palestinians break it, is another PR victory fir Israel. Sure you get a few media numbskulls that will try blame Israel for breaking the ceasefire, but when Israel plays their cards right the truth is too hard to deny.

Because each ceasefire costs lives. No PR victory is worth a soldier’s life.

In addition, dragging out the war costs the economy dearly; every day that the reservists are at war instead of at work directly hurts the whole country, so a war has to be finished as quickly as possible.

Moshe Feiglin, the only libertarian in the Knesset, has published his plan for what to do about Gaza. Here’s a version from mid-July, and here’s his letter to Netanyahu from a few days ago, after Netanyahu’s stupid acceptance of a ceasefire led to the attack in which Hadar Goldin was taken.
As anyone can see, what he writes is simply common sense, and any normal person would be astonished that anyone could object to it. But we live in a world where it has been immediately denounced as “genocide”, and people are howling for him to be arrested immediately for writing this. Well, if this is what you call “genocide”, then there’s nothing wrong with it. It’s just a word, after all, like “racism”, and it doesn’t have the power to turn right into wrong merely by being applied to it.