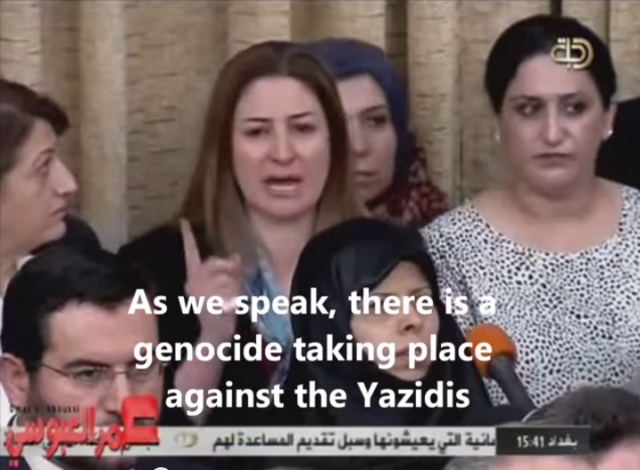 Various news outlets are reporting the crash of a helicopter being used in the humanitarian relief effort for the Yazidi refugees in Iraq.

#Iraq Army confirms helicopter crashed after mission to deliver aid supplies to Mt. Sinjar. Up to 20 people on board when it crashed.

Jim Sciutto who has been covering the crisis in Iraq for weeks reports that Vian Dakhil, the only member of the Iraqi Parliament representing the Yazidi minority group was on the helicopter.

Additional reports now say the helicopter pilot was the only death, but many of the passengers are injured including Dakhil and her son who was on board as well.

More: Dakhil, who asked world to save her people, is apparently OK. Two deceased. Others injured / broken bones. Still unverified

Just last week, Dakhil gave a passionate speech in the Iraqi Parliament pleading for the world to stop the Yazidi genocide by the Islamic State terrorists.

In addition to Dakhil, the New York Times reports one of its reporters was also on the humanitarian mission helicopter that crashed.

This post will be updated as more news about the crash is released.

Any word on why it crashed?

Ok all is well because she survived?

I think the pilot is a skill set that Iraq can not afford to lose .

All the others are freeloaders & publicity hounds weighing down the effort

There I said it . Unfortunately this is all too common – the ‘passengers’ do not know how to behave in a heli on a stressed mission .none of them were trained & a hindrance.

There are some in NZ who are paying attention and getting it right. This is a good speech by Sheree Trotter: https://www.youtube.com/watch?v=Ddmzrfw7rzY

Lol the pic that I mentioned before with the Yazidis girl I the pumps with Cuban heels has made Weaselzippers .

I am going over to see if those geniuses are noting the new refugee mountain escapee footwear .

( I just hiked 240 kms in an arid ancient mountain range carrying water & food for 3-5 days at a time . ) No can do in those things – nor any of the cleanup fits of the men .