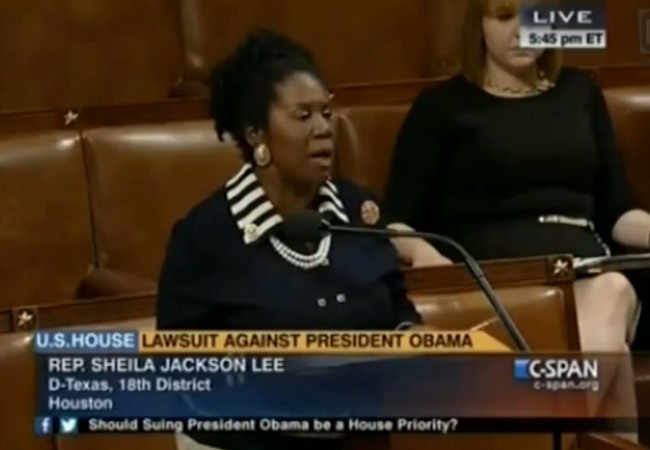 Last week was filled with impeachment mania. Everyone was wondering if the Republicans would try to impeach Obama. The Democratic Party just loved it. They hyped the subject to motivate their base and used the controversy for fundraising.

The best story to come out of all the impeachment news also came from a Democrat.

Stranger still, it was Katherine Miller of BuzzFeed who broke the story:

Texas Democratic Rep. Sheila Jackson Lee argued Wednesday the Republican effort to sue President Obama is nothing but a veiled attempt to impeach him — something Democrats never did to President George W. Bush:

I ask my colleagues to oppose this resolution for it is in fact a veiled attempt at impeachment and it undermines the law that allows a president to do his job. A historical fact: President Bush pushed this nation into a war that had little to do with apprehending terrorists. We did not seek an impeachment of President Bush, because as an executive, he had his authority. President Obama has the authority.

Except former Rep. Dennis Kucinich did actually introduce a bill to impeach Bush in 2008 — and Jackson Lee actually was a co-sponsor to the legislation.

The After Hours series from PJTV gave Jackson Lee the coveted Underwood Award for her efforts.

And you expect WHAT else from Rep. Sheila Jackson Lee ??

Truth ? Are you kidding ?

Our opponents are our fellow Americans, the ones who vote for the breath-taking-ly stupid Democrats. And educating them that voting for Democrats is not in the best interests of themselves or the country is going to be one tough job.

This Jackson-Lee won her 2012 race with 75% of the vote. Almost all members of the Congressional Black Caucus win with margins of 70% or more. (That of course is the result of affirmative action in elections: the creation of these minority-majority districts.)

Jackson-Lee is just a reflection of her constituents. That should frighten anyone, even Democrats.

I wonder if the TEA Partiers could field a good black candidate in her district?

Someone asserted to me that Republicans represent “the establishment” — not noticing that Democrats are a very powerful part of the establishment, and unaware that the permanent bureaucracy is dominated by Democrats.

I think one part of the problem is a simple matter of language: “Democrat” sounds democratic, but how many people know what “republican” actually means? People think they know what a “democracy” is, but do they know the significance of a “republic”?

All of the impeach President Obama people are in full denial mode. They’re trying to say “This was a fundraising tactic by the Dems.” As if Breitbart.com didn’t have topics by Palin suckup Tony Lee pushing impeachment. Topics citing Unity 2/3 of republicans want impeachment. ” Palin going on Medved’s show talking about impeachment. All of this and more happened within the last month. You got burned ,now its change the topic.Talk about dishonesty.

I guess it’s not cherry-picking for you to fail to point out how many Republicans in real, responsible positions rejected the entire idea. Anything that interfered with you meme does not exist? Do you know that lawyers who do what you have just done can be sanctioned by a judge if they do it in court?

“All of the impeach President Obama people are in full denial mode.”

Now, put up citations of the ACTUAL WORDS showing both positions.

Because, see, you Collectivist liars are very prone to put words in people’s mouths they never said. So don’t bother posting your favorite moonbat Lie-O-tron.

I forward a suggestion I overheard. Let’s write to President Barack Hussein 0bama at 1600 Pennsylvania Ave, Washington D.C. and include a copy of his oath of office. Then point out he has failed on numerous counts to fulfil that oath, listing them shouldn’t be a problem. We can then conclude that impeachment is not feasible, and for the good of the country he should resign. If 1% of the population did this once a month, it would lead to his whining like a stuck pig. If we were to do this once a month he would go apoplectic. I think I will start with writing to my Representative and Senators.