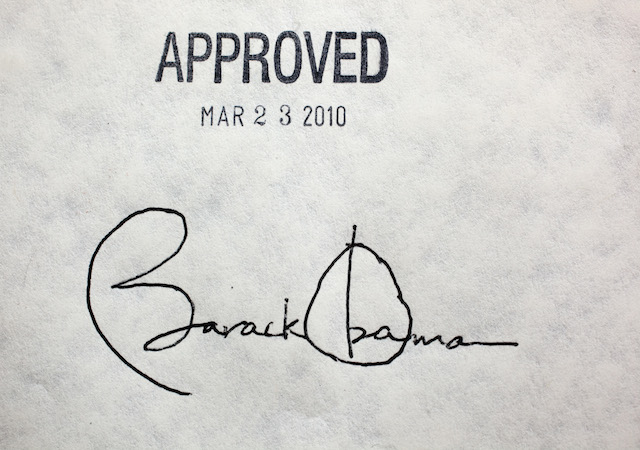 Patient advocates are up in arms over allegations that insurance companies are violating Obamacare’s anti-discrimination provisions. Groups like the AIDS Institute and the Leukemia and Lymphoma Society cite difficulties with getting coverage for expensive medications and finding quality in-network care as just two in a long list of grievances against the implementation of the new health care law.

Kansas’ commissioner, Sandy Praeger, a Republican, said the jury is out on whether some insurers are back to shunning the sick. Nonetheless, Praeger said the administration needs to take a strong stand.

“They ought to make it very clear that if there is any kind of discrimination against people with chronic conditions, there will be enforcement action,” Praeger said. “The whole goal here was to use the private insurance market to create a system that provides health insurance for all Americans.”

Adding to patient difficulties is the fact that, although some of Obamacare’s anti-discrimination provisions have been put into effect, many have been left pending for more than four years. This makes enforcement difficult when the people the law purports to protect have been told since 2010 that the Affordable Care Act is the immediate solution for those who previously were not able to secure coverage.

What’s troubling about the actions of patient advocates, however, is the obvious conflation of “discrimination” with “complications”:

The advocates also say they are disappointed by how difficult it’s proved for consumers to get a full picture of plans sold on the new insurance exchanges. Digging is often required to learn crucial details such as drugs covered, exact copayments and which doctors and hospitals are in the network.

Welcome to the bureaucracy, people. If you want the government to take complete control over your health care choices, you have to accept that it’s going to be complicated. People with lifelong diseases may understand better than just about anyone save their doctors how care plans work, but that doesn’t mean a bureaucrat will. The government subsists on regulation, not on flexibility. This means pages of rules and standards that everyone has to go through, not just the chronically ill.

“People who have high cost health conditions are still having a problem accessing care,” said law professor Timothy Jost of Washington and Lee University in Virginia. “We are in the early stages of trying to figure out what the problems are, and to what extent they are based on insurance company discrimination, or inherent in the structure of the program.”

Why couldn’t it be both? We already know that because of provisions in the ACA, Medicaid enrollment is up, while employer-based coverage enrollment has tanked. The perils of bureaucratic control over our economic decisions—not to mention our bodies—means that there are about a million moving parts governing how private companies are forced to interact with thousands of pages of regulatory reform.

Via the Affordable Care Act, patients have been sold an impossible-to-provide bill of goods. We want coverage and care, on demand and without costs or apology, but we don’t understand what it is we’re asking. Progressively-minded advocacy groups don’t see government as, well, the government. They see government as a provider—and this skewed world view is the reason that Americans with high-cost health conditions are now experiencing the full brunt of buyer’s remorse over yet another big government fantasy.

Obamacare might have helped people who had no insurance or couldn’t afford insurance but it’s harmed a lot of people who now have more limited policies that give you free birth control but no doctors in your area.

I’m a 46 year old male. I was pleased to be notified recently that I’m now covered (mandated by Bo-Bo-Care) for reconstructive breast surgery. And, oh yeah, my premiums just went up 27%.

The whole point of insurance is to protect us from unforeseen events. How do you know you for sure that someday you won’t have a compelling psychological need to change genders and then, tragically, one of your breasts implants pops? It could happen to anyone.

Wait for that single payer to solve everything so that no one gets anything and it costs a lot of money just to get the nothing that is available.

The government promised everyone insurance, not care.

What’s the deal with Obama’s signature? How many strokes does it take to make an ‘O?’ I count at least 3, maybe even 4. What the hell is that about?

When signing bills that the president feels are historic, he uses many, many pens, so that multiple individuals can receive a souvenir of that day. It looks like approximately twenty pens were used for signing PPACA.

They were all for it……..til they were agi’n it. Told you so. But you wouldn’t listen.

Well dang, how were we supposed to know! Nancy done told us we had to pass it before we could find out what was in it!