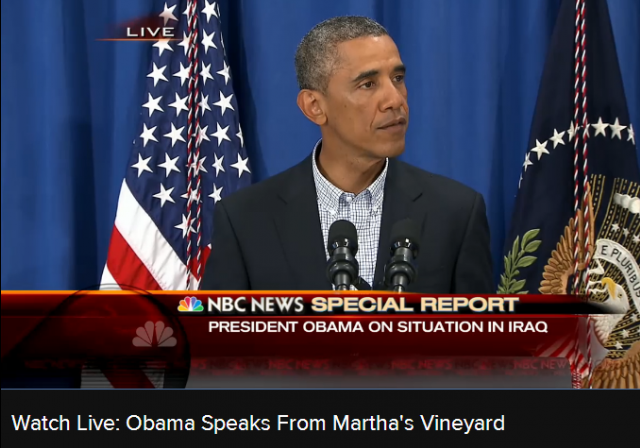 In what has become a nearly daily occurrence, President Obama summoned the media to discuss the situation in Iraq (and Ferguson, Missouri) from his vacation spot in Martha’s Vineyard.

The President seemed to take a victory lap on United States’ efforts to stabilize the Yazidi refugee crisis in Northern Iraq.

President Obama announced Thursday that U.S.-led airstrikes have broken the siege by Islamic militants against religious minorities who were trapped on a mountain in northern Iraq — but made clear the U.S. mission in the region is not over yet.

The president, in brief remarks from Martha’s Vineyard where his family is on vacation, said he expects the specific operation at Mount Sinjar to wind down. He said military planners will be leaving in the coming days, aid drops will stop and a U.S.-led evacuation is likely no longer needed.

“The situation on the mountain has greatly improved,” Obama said. “We broke the ISIL siege of Mount Sinjar. We helped vulnerable people reach safety.”

But Obama said U.S. involvement will not come to an end, as militants with the Islamic State — also known as ISIS, or ISIL — continue to brutalize the civilian population in the region, especially minorities like Iraqi Christians and Yazidis.

Obama said “we will continue airstrikes” where necessary to protect American personnel and facilities in Iraq.

Obama also reiterated his oft-repeated promise that there won’t be “boots on the ground” in Iraq to fight ISIS — despite the fact that U.S. Special Forces have already been on the ground to assess the situation on Mount Sinjar. One presumes that Special Forces and military advisers to the Iraqi Security Forces do wear boots, but perhaps Obama knows best.

What Obama did not do — and hasn’t done — is lay out a coherent strategy on how to deal with ISIS over the short or long haul. He mentioned continued U.S. air power being used to tactically handle the Yazidi humanitarian situation, but that’s about it.

And when the French are ridiculing an American President’s resolve on Islamic terror, you know the world is topsy-turvy.

French Foreign Minister Laurent Fabius has a message about Iraq for Barack Obama: Get back to the White House and do something.

‘I know it is the holiday period in our Western countries,’ Fabius told a radio interviewer Tuesday in France,’ but when people are dying, you must come back from vacation.’

Meanwhile, from the dove wing of the Democratic party, President Obama has some pressure building to curtail any further U.S. involvement in Iraq.

Although President Obama may wish that the crisis in Iraq is over, the situation on the ground throughout the country is far from stable. Today, the United Nations declared its highest level of emergency in Iraq due to the deteriorating security conditions.

Fighting erupted early on Thursday in the rebel-held city of Fallujah, about 65km west of Baghdad.

The clashes on the city’s northern outskirts killed four children, along with a woman and at least 10 fighters, said Fallujah hospital director Ahmed Shami.

Fallujah has been in the hands of the Islamic State since early January, when the group seized much of Western Anbar province along with parts of the provincial capital of Ramadi.

The fighting came as the UN declared the situation in Iraq a “Level 3 Emergency” – a development that will trigger additional goods, funds and assets to respond to the needs of the displaced, said UN special representative Nickolay Mladenov, pointing to the “scale and complexity of the current humanitarian catastrophe.”

The Security Council also said it was backing a newly nominated premier-designate in the hope that he can swiftly form an “inclusive government” that could counter the threat from rebels, which has plunged Iraq into its worst crisis since the US troop withdrawal in 2011.

The long-term situation in Iraq seems more perilous than ever today — but at least President Obama could have a “mission accomplished” moment before he headed to the golf course on Thursday afternoon.

UPDATE: This afternoon, the political impasse that has plagued the Iraqi government ended: Prime Minister Nouri al-Maliki has stepped aside.

Maliki: I withdraw my candidacy for PM in favour of Abadi to safeguard unity & stability of Iraq, political process pic.twitter.com/iSIAWI3oai

Maliki says he's stepping down in favour of Abadi to protect Iraq's national interests. How many Arab leaders have done/will do the same?

Maliki says he refused to use military force to stay in power to avoid Iraq returning to a dictatorship.

The long-term situation in Iraq seems more perilous than ever today — but at least President Obama could have a “mission accomplished” moment before he headed to the golf course on Thursday afternoon.

It’s not the golf courses that he heads to, but the fancy locker rooms.

Can’t see the Tees, ears are to big.

“Obama declares ‘siege of Mt. Singar’ over”. Was this meant to be a Biblical moment on a par with Moses presenting the 10 Commandments?

However, there is no truth in Barry Soetoro’s declaration.

Thousands of Yazidis have been able to leave the mountain, not because of any U.S. effort of clearing the paths, but because the Syrian Kurds cleared the path and helped them to cross over the border into the region held by Syrian Kurds and from there these people crossed again into northern Iraq and the refugee camps that are at the border.

The Syrian Kurds took this step after the Iraqi Kurds were defeated by IS. They took pity on the Yazidi and attempted to help them, but they only rescued something like 5000 people and there were many more that needed to be rescued.

Australia and the U.K. have also taken measures to assist with the food drops.

Unless they are using helicopters or perhaps military vehicles that can cross that terrain on the mountain so that they can transport many more people, then the crisis is not over, it is ongoing.

On top of that there is no mention of the Christians who had to flee from Mosul who are now waiting in Erbril to be rescued.

I posted this on Hot Air this morning:

I’ve been following this closely. Near as I can tell tell there was 1 drone strike “near Sinjar” yesterday. Near as I can tell, there was 1 food/water air drop operation conducted by the U.S. (7,000 gallons of water) several days ago. Iraqi choppers have been doing the rest, 3-4 per day. The PKK have been evacuating some of the Yasidi down the north side of the mountain into Syria, then back over to Kurdish Iraq. A 15 hour “trail of tears”, where the weak are left to die.

Yet, I just heard the Pentagon spokesman say “THANKS TO OUR AIR STRIKES, OUR HUMANITARIAN AID, WE HAVE FACILITATED THE SAFE PASSAGE OF THE YAZIDI FROM THE MOUNTAIN. CRISIS OVER.”

Obama abandoned them, then took credit for saving them.

In that kind of setting – open air, lines of engagement clearly drawn, no civilians in the target (ISIS) area to worry about, no infrastructure assets to worry about, just dirt and rock and A-rabs, we could eliminate any living thing in the ISIS area from the air in half an hour.

Why the hell didn’t we ? Why do we play around with these cross-dressing towelheads ?

The reason it. Is over is because it never was. These people could have just kept on walking over to .Syria & back into Iraq further up . This is proof ISIS has not got them under siege . They can’t go directly north because it is sheer faced but westwards & around as they have been doing for thousands of years. it is Is not as if they don’t have GPS or even needed to be led down by Syrian Kurds . It is only 45 kms of fairly flat plateau .

Furthermore the Sinjar mountains is a water source , not desolate . Everyone could have picked up a few litres each on the way up ( yeah tell me they don’t know where the sources are after thousands of years ) . Those elderly people on the rescue helicopter seemed to have gotten half way .throw a few energy gels out & off they could have gone .it is not as if ISIS were picking them off .

Not our problem… Let the Iraqi government hire the security contractors they pissed and moaned about.

Contractors will demand reasonable ROE… and bring in the right bad asses to do the job.

Since the Iraq government would have to foot the bill- it’s not our tax dollars. That will also make them be NOT STUPID on ROE… get the job done and get out.

Now it. Is admitted that several thousand Yazidis actually live up the mountain ( which is in this part a plateau) . They have no intention of leaving .

Why do we think the ancient peoples are without skills & local knowledge ? Yazidis have been retreating & hiding in these mountains for thousands of years .they know every bit of it .

There are 40,000 Yazidis in Armenia – descendants of the Escapees from the Kurds who forced them to be Sunni Muslim. Then they double survived the Kurds massacring them as henchmen off the Turks .

Even as recently as Nagorno Karabach ( ongoing re the recent thread ) the Yazidis have sided with the Armenian Christians.

What is this pseudo affinity with the Kurds displayed here? They have managed to gain themselves enough enemies in the region – the reason the Kurds cannot unite because there is significant opposition . If you thi you can squads this b giving them arms – god luck . The others will fight them because to unite the must gain territory across the region . .

( if you think you can squash them by giving Kurds weapons ….)

Defeat ISIS?? What makes you think the Obama administration has any interest in doing that?

The “problem” was Obama’s poll numbers dropping, and bad press for doing nothing. Now, he’s done “something”, so problem solved.

Actually stopping ISIS was never a concern, much less a goal, so why would they have a plan for it?