“Let Me Deal With the Grown Ups.” 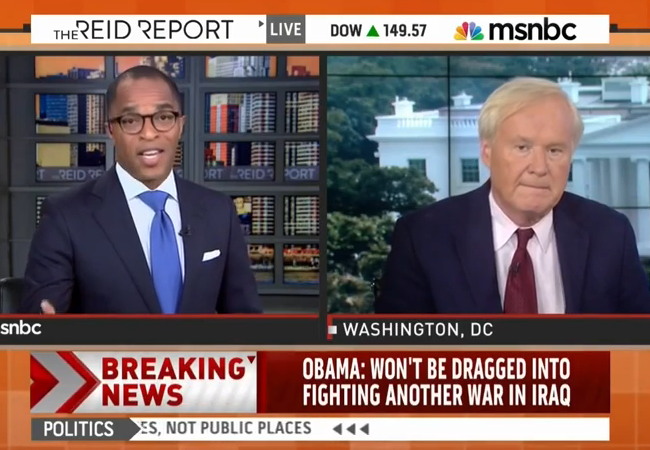 Apparently, Chris Matthews of MSNBC isn’t a fan of blogs and websites. In a recent broadcast, he took special aim at VOX.

Chris Matthews is apparently no fan of blogs or websites, even when they are run by his comrades at MSNBC.

On the August 8 edition of The Reid Report, guest host Jonathan Capehart welcomed the Hardball host to the program to discuss Iraq. He got a whole lot more than he bargained for. Capehart read an excerpt from a piece appearing on Ezra Klein’s Vox.com, which purports to be in the business of ‘explanatory journalism,’ but acts more as an Obama administration mouthpiece. Klein frequently shows up on MSNBC programs, either as a contributor or a guest host. In responding to the excerpt, Matthews angrily ripped Vox:

Here’s the video via Soopermexican of The Right Scoop:

Ezra Klein’s explanatory journalism outlet “VOX” has taken plenty of ridicule from conservative critics in recent weeks. Everyone from Ace of Spades to Mollie Hemingway of The Federalist has had something to say.

Klein is a frequent guest on MSNBC. Things could be awkward in the green room the next time he visits.

“That undignifies the whole operation. And I don’t wanna do that.”

Oh, yeah. Why, when I think of Chrissy ‘Tingles’ Matthews, Rachel Madcow, The Wrong Rev. Al, and the rest of the clown posse at bsNBC, I just naturally have “dignity” come to mind.

The rest of the clown posse would include Melissa Harris-Perry … bsNBC’s fashion genius, and inventor of the ‘tampon earring’.

Ahh yes, only a true intellect will use the word “okay”, three times without taking a breath.

Because Chrissy is *so* dignified. Or something ~

As an amateur, non-professional, never studied, pop psychologist I diagnose Ezra as a victim of too many wedgies when he was in Junior High School who has never figured out how to get his tidy whities out of his butt crack.