Media mostly laughs with, not at, Obama

Media mostly laughs with, not at, Obama

Jon Stewart is a classic example of not-too-subtle media bias. 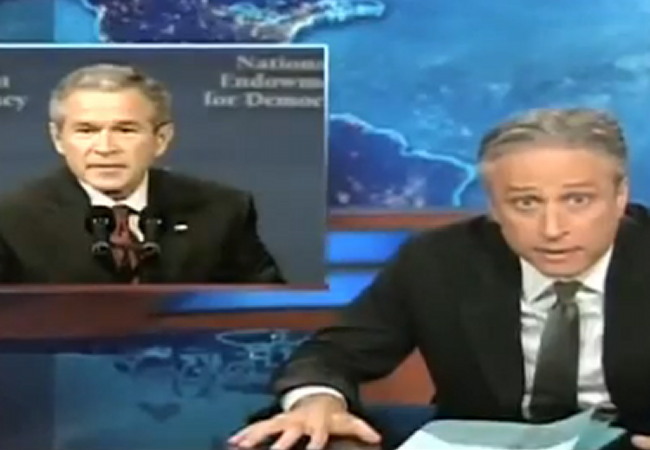 In case you missed it, I went off on a bit of a rant about comedy in the age of Obama at my site American Glob this week.

Frankly, I’m sick to death of the left’s inability to find anything funny about Obama while continuing to target the same tired subjects of Bush, FOX News and Republicans in general.

Jon Stewart is a classic example of this and the left loves to point out how Stewart “destroys” his subjects.

David Rutz of the Washington Free Beacon points out that Stewart can often induce laughter from his audience by simply staring at them after showcasing his chosen target, who is almost always someone on the right:

You know the drill if you watch The Daily Show.

After that comes the true punch line, where Stewart often simply gapes at the camera for humorous effect, to convey his shock or revulsion at whatever those clips displayed. All this is done to raucous applause and laughter from an adoring studio audience.

It’s impressive: A group of people who obediently guffaw like hyenas at a glance. Stewart often can be funny, but like fellow mainstream media-adored liberal comedian Stephen Colbert, he limits himself almost exclusively and rather boringly to targeting one side of the political spectrum.

Here’s a helpful video compiled by the Free Beacon:

Jon Gabriel of Ricochet also made recent note of Jon Stewart the destroyer:

And that doesn’t count the common misspellings of John or Stuart. Often, “The Daily Show” host is replaced with Stephen Colbert (60,900 destroys) or John Oliver (217,000 destroys), but the pattern is the predictable.

Needing to up the ante from the all-too-common “destroyed,” progressive sites are intensifying the descriptions. Stewart now regularly “flays,” “eviscerates,” and even “disembowels” the bêtes noires of the Acela corridor.

By November I expect tougher headlines: “SEE Jon Stewart DRAW AND QUARTER Fox News and put Bill O’Reilly’s HEAD on a PIKE as a BLOODCURDLING warning to others!”

The left can’t laugh at Obama because in doing so they would be laughing at themselves. That would be an admission of his failure as a president and their failure in supporting him.

If a Republican wins in 2016, and I hope he or she does, the left will use comedy to attack that person immediately and pretend that the previous eight years never existed.

It’ll be hypocritical and annoying but at least the country might finally get back on the right track.

Won’t that be funny?

The Majority of Americans are “Laughing At” the Laughing Stock Media.

Hey their news programs (sic) are way funnier than all the fake TV comedies they’ve spewed out in the past decade.

Exactly what I was thinking.

Why laugh at Obama?
We can laugh at the ridiculous boot licking by most MSM outlets.

No, wait.
Come to think about it, it’s not even funny anymore.

Hey, potential bankruptcy is not a laughing matter, for those with the small market shares.

USA Today and the Wall Street Journal have replaced the New York Times and the Washington Post as our national daily newspapers. This is a long-term trend.

It’s painfully obvious that Obama is handled with kid gloves because he is a minority.

I have seen the liberal media have no problem insulting Biden’s intelligence. I wonder why that is.

I remember reading some cast members of SNL were worried about making fun of a black President when Obama took office. But as the years went by it became obvious that most of the SNL writers and cast members were too in love with the guy to make fun of him.

This is also why I enjoy my regular doses of Newsbusted.

Do people think that it is not abusive ad hominem when the abuser is supposedly funny and making his living at someone else’s expense?

You know the drill if you watch The Daily Show.

Liberals also try and claim they give ‘equal time’ to jokes about conservatives and liberals and have the audacity to claim that makes them ‘fair’ and ‘non-partisan’.

Except the conservative ‘joke’ will be something like, “What’s the difference between Romney and Hitler? Hitler paid taxes!!”

While the liberal ‘joke’ will be something like, “Obama is such an amazing speaker he has to have his speech written down so he doesn’t accidentally make people’s heads explode from exposure to awesome’.