“He’s not a humanitarian president.” 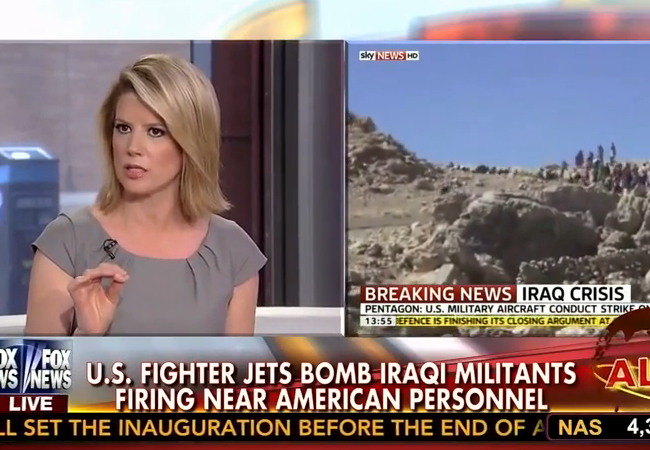 Kirsten Powers and other panelists on the FOX News program “Outnumbered” were discussing Obama’s newly discovered concern for Christians in the middle east and things got a little heated.

Powers, who is a liberal and frequent defender of Obama, was one of the most vocal critics.

Tim Cavanaugh of National Review has the details:

…Kirsten Powers, usually the most liberal of the panelists, tore the president a new one:

“He has not uttered the word ‘Christian,’ and now suddenly he throws it in with the Yazidis,” Powers said. “We’re not doing any airdrops to the Christians, who are refugees in the Kurdish region. [Virginia Congressman Frank] Wolf has taken to the floor, I think, seven days in a row now, pleading with the administration: Please help these people. They need humanitarian aid; they need drinking water. They have nothing. They’ve lost their homes; they’ve lost everything.

The White House has done nothing; they’ve said nothing. And then the president goes on and goes into quite a lot of detail about the Yazidis, and never really gets into the specifics about Christians. I mean, it’s really unbelievable, and he has no right to invoke humantiarianism, because he is not a humanitarian president. A humanitarian president does not sit quietly by, while hundreds of thousands of Christians in Iraq [are uprooted or killed]– forget about the rest of the Middle East — and doesn’t say a word.”

Kirsten Powers makes a valid point and her opinion is likely shared by Christians all over the world.

So, we’re up to…what…four sorties now?

We’ve hit an artillery piece and a mortar battery. ISIS will just send in a few suicide bombers to do the work.

It is all just another Obamic lie…a head-fake. And we have the same magic thinking. “There is no military solution in Iraq”.

Sure there is. You have to kill killers who glory in killing.

Nor am I at all surprised by Obama’s selective indifference.

I’m only surprised that Powers thinks she is getting away with something here.

Powers will find a way to back obama 100% as soon as she can. It will be that he mentioned Christians at some point and made his usual BS teleprompter speech about how much HE will assist them and then offer them money. She simply cannot think logically.

If she could think logically, she would long ago have come to the position where Obama’s indifference is not at all “unbelievable,” but sadly predictable. If she were perceptive, she would have noticed long ago that any “compassion” he expresses is mostly self-serving and hollow.

Has there been any situation where Obama has aimed to help any Christian (or Jew) who was being harmed or threatened by Muslims?

Kirsten (mis-spelled birth certificate?) is doing the intellectual splits on two horses each of which is moving towards the outside. At some point, it will be impossible to keep each of her feet planted on its horse. She will have to choose a horse, unless she follows the Juan Williams technique which is to jump back and forth between horses.

I think she’ll try to do the female version of Juan, counting on her blonde hair and decent face to cover the inconsistencies in her persona. Sadly, it will probably work.

Obama today made sure to blame Bush, for not getting his SOFA arranged. He claims the troops would not have been protected from prosecution, and so he had no choice but to leave. He of course claims any other argument is bogus.

“Graham told the story of his personal role in the negotiations during the draw down of U.S. forces in Iraq. He said when he and Sens. John McCain (R-AZ) and Joe Lieberman (I-CT) were in Iraq, Malik agreed to a “follow up force” being left in theater and it was the Obama administration’s intentional refusal to give the Iraqis a solid troop number that destroyed the deal.
http://www.breitbart.com/Breitbart-TV/2014/06/17/Senator-Graham-Obama-Administration-Lying-About-Iraq-Status-of-Forces-Agreement

Bush got parliament approval, but that vote was no longer going to pass. But now we have some boots on the ground, so something changed.

““We basically need a piece of paper from them,” another U.S. official involved in the negotiations told The Daily Beast. The official didn’t explain why the parliamentary vote, so crucial three years ago, was no longer needed.
http://www.thedailybeast.com/articles/2014/06/23/obama-does-a-u-turn-on-immunity-for-u-s-troops-in-iraq.html

Anyway, if we can do pin pricks now, we could have done a major air assault on ISIS as they were exposed on the roads. We need to release the dogs of war, instead of being so restrictive and cautious on every engagement. Genocide of Christians IS occurring as Obama golfs.

The easiest explanation is that Obama’s loyalty is to the Muslim Brotherhood first. That put his Christian killing tyrant in charge of Egypt, gets Kerry giving good deals to Hamas versus Israel, allowed the black flags to fly over Libya as ambassador Stevens was murdered, and pits Obama against Maliki.

He’s not a competent president either. Nor is he an effective commander-in-chief. He is a lazy, cowardly, hypocritical, arrogant, narcissistic fool.

And thanks again for voting for this idiot, Kirsten.

Kirsten Powers left the lib media bubble to make FOX her majority home and has also converted to Christianity, calling herself orthodox rather than evangelical only because of the baggage attached to the latter term. She continues at Daily Beast and other lib outlets, but she is now outside the bubble.

She is making, I believe, a long slow slide towards moderation, and if she isn’t careful, her as yet developing powers of objective analysis may lead her all the way to conservatism. Crazy, we say? No crazier than her conversion to evangelical Christianity.

Powers is not just another talking head to loathe. Sure, as soon as she castigates Obama for one bonehead move, she applauds him for another, but it’s progress. We’d do better to encourage her. Others might follow her, if not in religious conversion, perhaps in also moving to the political center and perchance, fully right. Trash her for it and they may not. Patience.

When you train any critter…kids, dogs, horses, former spouses, pundits…

Golly, you mean Obama is reluctant to take positive action against Islamic Supremacists? Really? Who could believe such a thing?

Kirsten Powers is merely applying the values that Liberals hold dear to the situation as she sees it. I do believe that, over time, the situation she sees is different from what a lot of other liberals see, because she is aware of stories that are not being carried by other media entities.

There have been times in my recent memory when Fox and a select group of blogs have been the ONLY sources for a story.

For only one example, my local paper is the San Diego Union-Tribune. They carry the AP, MCT, Washington Post and New York Times for most of their national news. The coverage of the war between Hamas and Israel has not even touched on the Geneva Conventions violations by Hamas, such as its use of civilians as human shields and Israel’s extraordinary efforts to avoid killing civilians.

To the extent Kirsten knows what news is being carried by FOX, she has a different knowledge base from other Liberals.

Dear Kirsten, not only is Obama not humanitarian, Obama is a sociopath.

Did you vote for Obama? Both times?

I suspect CNN, MSNBC, ABC, NBC, CBS, etc., gather the same general set of info as does FOX, but their editors spike those stories that might harm the progressive movement, the Dem Party, or the Obama administration. Anyone working for both, like Powers, sees the difference in what does and does not get reported, and why.

Sharon Atkinson came over and Powers is working on it. Lib ‘journalists’ saw what NPR did to Juan Williams for allowing half of one toe to slip over the message/agenda line.

I sincerely hope these represent a trend and are not outliers.