Is Britain finally coming to grips with the Jihadis among it? 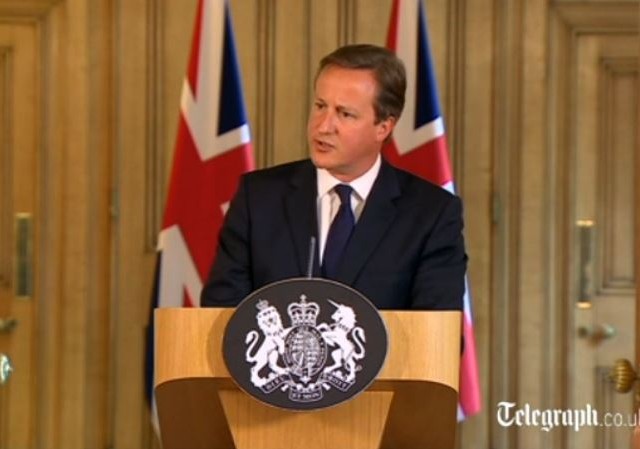 Britain, home to many of the Jihadists fighting for ISIS, including the likely beheader of James Foley, has just raised its terror threat level.

Theresa May, the Home Secretary, said the decision was taken in light of the increasing dangers posed by British fanatics and other foreign fighters in Iraq and Syria….

Police and security services have long been concerned over the large numbers of British jihadists travelling to Syria and Iraq.

It is feared more than 500 have gone and around half of those are now back in the UK, with some possibly planning attacks here.
At least one plot is known to have already been foiled.

Is Britain finally will to address the Jihadis among it? Prime Minister David Cameron says Britain is, but that’s far from clear, particularly in light of the disgusting disclosure recently that fear of being called “racist” led British authorities to ignore for over a decade Pakistani-community rape gangs targeting over 1400 white teenagers based on race and religion.

(added) It’s not like Britain was not already aware of the problem, as it manifested itself in the brutal machete murder of Lee Rigby: 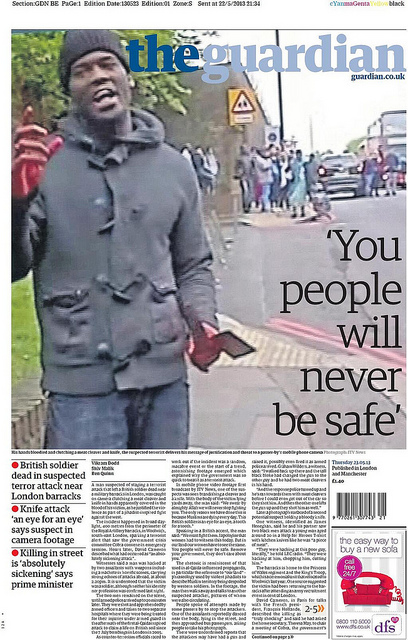 Britain is beginning a process that may lead to the identification of the enemy that has been working successfully to destroy western civilization. In that regard they are way ahead of America, which, pursuant to obama’s plan, is doing all it can to facilitate the success of that enemy.

That enemy has been at it for 14 centuries now. The Crusades weren’t launched on a lark to oppress the Palestinians, they were a call to defend Christians from the precise sort of barbarism ISIS is implementing in Syria and Iraq right now.

So, yeah, it’s good they are beginning to recognize it. Too bad our President doesn’t.

Although I’m sure the problem gets his full attention in between holes.

A helpful article on the why of the Crusades (which were defensive in nature) is THE CRUSADES IN CONTEXT, By Dr. Paul Stenhouse, 2007,

British Prime Minister David Cameron said the “root cause” of the terrorist threat in the United Kingdom is “Islamist extremism.”

Contrast that with this: http://www.foxnews.com/politics/2014/08/29/fbi-national-domestic-threat-assessment-omits-islamist-terrorism/

What’s the saying about politics being the art of finding (or creating) a problem, then imposing a solution that does nothing about the problem?

“Is Britain finally coming to grips with the Jihadis among it?”

Highly, highly unlikely. To do so, at least honestly, would be an acknowledgment that Labour’s INTENTIONAL increase, flood-gate style (beg. circa 1997), of Muslim immigration was done to end the United Kingdom. Do you really think they’ve got the decency to admit that?

And the likes of the Camerons of this world (despite belonging to a different political party) gave material assistance to Labour in all this.

So go ahead, UK, raise your security flags all you want. True learning of the utter danger that you have invited – purposefully invited !!! giving them welfare benefits to boot !!! – into the British Isles will only come through more Muslim terror attacks. Remember, Western “security” forces have to be right 100% of the time to see success; Muslim jihadis only have to be right once.

If 9/11, Madrid 2004, London 2005, the “Abab Spring,” ISIS, to name the big Muslim successes, setting aside mention of the 000s of smaller scale Muslim attacks worldwide since 2001, have not been enough to teach an unknowing world about Islam and its designs on the rest of us, then that only means further Muslim attacks are in our future.

So, being given some more Islamic medicine – meaning more Muslim attacks here in America or in Europe – may be the only way those who remain ignorant of the ways of the Muslim will learn some hard lessons of life.

And even when a Muslim attack occurs, a predictable, super-annealing use of the Muslim EXCUSE Machine, familiar to every Counter-Jihad reader, will be kicked into high gear, with its sole purpose being to invent reasons why an obvious Muslim attack is not a Muslim attack. “Who are you going to believe, us or your lyin’ eyes?”

Hasan’s 2009 attack is a perfect example of all that. Hasan “Allahu Akbarred” his way through his rampage, but the J-I-M words were/are never used in officialdom or in the MSM. Jihad. Islam. Muslim.

Nothing grabs one’s attention like being hit on the side of the head with a 2 by 4. And from all appearance it will take more Muslim successful attacks against infidels with the loss of Western lives before more necessary lessons about Islamic ideology are learned.

When the intellectuals in our society turned from God to moral relativism, they ceased to be able to acknowledge the existance of evil. Evil is now explained as a product of upbringing, a few misguided individuals, or the mentally ill.

Sounds like Chamberlain.
We have evil among us, we’ll have their brethren talk sternly to the miscreants.

Even a Leftist like the late Christopher Hitchens foresaw the day of reckoning with Britain’s self mutilating immigration policy and ideas of ‘multiculturalism’.

They could come into Kuhlifornia by invitation from Gov. Moombeam.

To me it seems “highly likely” that all of this is just so much smoke and mirrors. I’ll believe it really amounts to something when they make a substantial move against their Islamic Supremacists; something along the lines of forcefully shutting down the system of permitted Shara courts in what they euphemistically call a “parallel legal system”.

Until they develop the will and fortitude to take positive steps to address the problem they’re just whistling in the dark, hoping it will keep the bogey man away. They should ask James Foley how well that works. Oh, wait …

Until immigration of Muslims is banned and all Muslims willing to accept $50K to return to their countries of origin is implemented, the West is in peril.

The ones who want to remain and wage “settlement” Jihad will find themselves deported by FORCE.

Send ’em to Calia-forn-ya, so they can fight with La Raza for what’s left when the US pulls out for good.

If Mr. Cameron is serious, some step he could take:

1) yes, shut down the Sharia courts. One law for everyone

2) reform immigration so that individuals cannot come to the UK and live off the dole (should be true in the US as well). No ‘benefits’ for those coming from elsewhere

3) stop benefits and start deportation for individuals identified as extremists. Living in a foreign country is a privilege, not a right — if you’re preaching revolution you can be shown the door without prior demonstration of “beyond a reasonable doubt” evidence

4) #3 applies to all immediate family members as well. If sonny-boy is going to preach jihad and mayhem, mama can fly home to Pakistain

This would be a start. We could come up with more common-sense, low/no cost solutions to the problem.

Next time Ed Henry is in a WH press conference, he should ask:

“Mr. Obama does not have a Syria strategy yet … does he have a strategy for the 2014 elections?”

I played golf with a British Embassy official on vacation visiting relatives this afternoon, and suggested that the Limeys change this terror advisory to “Highly Likely Due to Barack Obama’s Total Incompetence”.

In typically cool British fashion, he smiled wanly but then promptly sliced a “Nike One Tour” into the deepest part of the hazard.