Suit under the Ku Klux Klan Act and RICO? Seriously? 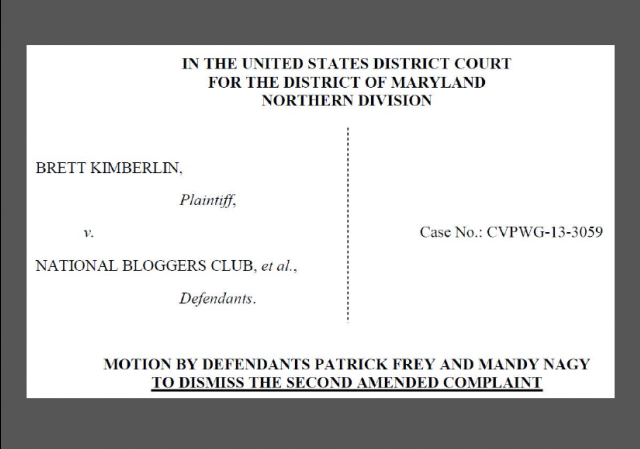 Some of you may be aware that Brett Kimberlin has sued numerous conservative bloggers and media figures (Michelle Malkin, Twitchy, Glenn Beck, Redstate, etc.) alleging, to the extent it can be discerned, a wide range of purported violations, including, incredibly, violation of the Ku Klux Clan Act and the RICO (Racketeer Influenced and Corrupt Organizations) Act, as well as a variety of other conspiracy and defamation related claims

It all relates to criticism of Kimberlin and exposure of his criminal record and other legal problems he has had over the decades, and reporting on the issue of “swatting” (falsely calling in a report of someone with a gun at a location to get the police Swat Team to arrive, guns drawn.)

Two of the defendants are Patrick Frey (of Patterico) and Mandy Nagy — yes our Mandy Nagy — unrelated to her work for Legal Insurrection.

The case is filed in federal Court in Maryland, and has had a bizarrely active and unproductive docket, with over 180 entries to date, many of which were precipitated by Kimberlin’s serial filing and requests for permission to file, amended complaints.

Kimberlin now is on his 2nd, and according to the Court, final, Amended Complaint.

Many defendants have moved to dismiss, and now so too have Patrick and Mandy, jointly represented by Ron Coleman (who also represents Legal Insurrection when needed, which fortunately is rarely). Ron is a great friend to bloggers.

My take? Having read through the various complaints, including the latest, I’m wondering how in the world the case could survive. But I’ve learned not to bet on court cases, we can only hope that justice is done, and promptly.

There’s also a separate trial underway in a different state court case involving some but not all of the same defendants (Frey and Nagy are not part of that). Dave Weigel is attending the trial and reporting. Stacy McCain, a defendant in the state and federal cases, is reporting on his own trial as well.

I’ve split the Motion to Dismiss in the federal case into the Memo of Law and the Affidavit and Exhibits. Here they are:

I’m wondering why the judges in these courts have not flushed this crap down the judicial thunder-mug.

Apparently, mentioning that, as a matter of public record, a certain person is a convicted terrorist violates this certain person’s “civil rights” and results in actionable damages.

I also wonder why the courts have not sanctioned said convicted terrorist.

Since this case clearly resides in Bizarro World, I have to wonder, would this court consider the above comment an actionable libel?

This is a NSLAPP suit: NON-strategic lawsuit against public participation. It often requires a lot of work to counter a truly baseless argument.

Although a reasonable person would settle most suits, or be satisfied with accepting a dismissal, I would suggest that, when dealing with an unreasonable plaintiff, it might be worthwhile to file the subsequent suit for malicious prosecution with request for damages and take it to judgment.

Valerie, I find that when dealing with the irrational vexatious litigant, once you get the dismissal of judgment for the defense, the best recourse is to try to fade away and let the crazy person find another target. I would not pursue a malicious prosecution action unless it looked collectable!

I won a case against a crazy person (a disbarred attorney), who responded by suing me, my client, the judge and the jurors for conspiracy against him, for violating his civil rights, for defamation (despite the litigation privilege), for RICO (the court system itself was alleged to be a Racketeer Influenced Corrupt Organization!!), and for a myriad of other claims. The federal court was NOT very patient with this lawsuit, but it still took time and money to get it thrown out.

My sympathies to the victims in this frivolous lawsuit!