Barney Frank on Obamacare: “they just lied to people”

Barney Frank on Obamacare: “they just lied to people” 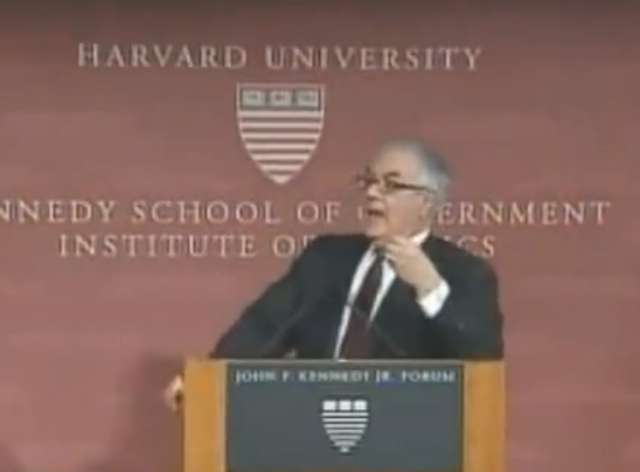 “The rollout was so bad, and I was appalled — I don’t understand how the president could have sat there and not been checking on that on a weekly basis,” Frank told HuffPost during a July interview. “But frankly, he should never have said as much as he did, that if you like your current health care plan, you can keep it. That wasn’t true. And you shouldn’t lie to people. And they just lied to people.”

“He should have said, ‘Look, in some cases the health care plans that you’ve got are really inadequate, and in your own interests, we’re going to change them,'” Frank said. “But that’s not what he said.”

Frank was a 16th term Congressman from Massachusetts who retired from career politics in 2012. But he has always been an outspoken supporter of Obama and the Obamacare law itself.

However, just this week the Kaiser Family Foundation released poll numbers showing a steep drop in support for Obamacare among the American public at large.

After remaining steady for several months, the share of the public expressing an unfavorable view of the health care law rose to 53 percent in July, up eight percentage points since last month’s poll. This increase was offset by a decrease in the share who declined to offer an opinion on the law (11 percent, down from 16 percent in June), while the share who view the law favorably held fairly steady at 37 percent, similar to where it’s been since March.1 Republicans continue to be the group with the strongest opposition to the law, but the increase in the share with an unfavorable view between June and July was similar across the political spectrum and different demographic groups.

Now the liberal lion Barney Frank has joined the masses and lost faith in Barack Obama and is angry at the lies. President Obama… if you’ve lost Barney, you’ve lost your base.

Bwarny Fwank was a HUGE liar WRT the entire Housing Bubble Collapse. He and his fellow Collectivists worked VERY hard at setting up the VAST market distortions that led to that whole debacle.

He’s since (sorta) admitted it, too.

and in true DC prog fashion they had the gall to name the legislative “fix” after him. what a sick joke.

‘they’ just lied to him.

Like he wasn’t one of the pieces of shit lying through his teeth the entire time.

I really hate these politicians who totally screw the Country over then claim “I didn’t know”, or “I was wrong”.

He’s just discovered that being lied to doesn’t pay as well as being the one who’s lying.

Just another grubbing libtard throwing obamullah under the bus now to save his own reputation. He’s just another ‘rat fleeing a sinking, stinking ship.

May the Queen of Lisps rot in Hell for his major role in ruining the country.

Dodd and Frank kept GWB from due diligence on his Administration’s handling of the fiasco described by Michael Lewis and Joe Nocera in their books on the housing crisis.

It was GWB’s responsibility, but to have this invert blame the serial Liar-in-Chief now infesting the WH for lying and deceiving is risible.

That said, ObamaCare is still going to be a fiasco at the end of the day.

the rot that caused the housing collapse started decades before GWB. yes he should have fixed it, and yes Frank and the other socialists cockblocked him every step of the way. DC is so rotten I think we need a repeat of the war of 1812.

( I think I just threw up a little in my mouth.)

( Maybe that should have been “PWESDENT”!

if you’re rooting for him, that’s not vomit in your mouth

Yet Frank was a huge supporter of Obamacare and even preferred single payer.

It is absurd for Barney Frank to criticize Obama’s lies. We know from an exchange that Obama had with Eric Cantor at the healthcare summit held in Feb. 2010 that Obama KNEW 8-9 million people were going to lose their existing coverage. It’s unambiguously clear in the first 30 seconds of this video from that summit:

Yet when selling the public on Obamacare, Obama repeated the same lie at least 36 times telling us that we could keep our existing insurance coverage.

Obama knew he was lying each of those 36 times. Frank’s party designed the law and he voted on it, so Frank knew Obama was lying. It was a design feature of the law that Frank’s party created that 8-9 million people would lose their existing coverage. Yet elected Democrats like Frank chose to remain silent as Obama repeatedly lied to the public about it.

Frank was a willing co-conspirator in the scheme and his silence as Obama repeatedly lied about the laws impact on public can be construed as Frank’s tacit endorsement of Obama’s lies. It is so disingenuous and sleazy for Frank to criticize Obama now for lying that I feel like I need a shower after reading this post.

It’s diabolical that the Democrats first punished the people who were already buying insurance out of their own pockets, on their own initiative. We were doing the right thing, and the Dems decided to attack us first.

??? What is this — let’s start scapegoating Obama, he deserves it anyway, Obama the aberration, not “us”, etc. — in order to boost the Democratic party for elections?

Still lying about Obama and ObamaCare. The reason most people can’t keep their insurance and doctors is that Tyrant Obama the Liar had the dept of HHS write regulations turned his promises in to lies.

I’m guessing Barney Mumbles found out that Zerocare doesn’t cover known consequences of deviant sex acts. It’s okay if you just get a pain pill but not for him.

‘Look, in some cases the health care plans that you’ve got are really inadequate, and in your own interests, we’re going to change them,’”
— Glad to know it’s in my own interest to pay a lot more to get coverage for services I cannot possibly need or will never want, and to get a policy that most doctors and the best hospitals don’t accept. Oh, and higher deductibles too.

I could never have figured that out on my own. Thank heaven we’ve got Democrats to tell us what our best interests are, and to make us pay through the nose for it.

“The rollout was so bad, and I was appalled”

The rollout was the biggest “unforced error” by this Administration and it will go down in history that way.

“He should have said, ‘Look, in some cases the health care plans that you’ve got are really inadequate, and in your own interests, we’re going to change them,’

Ohferchrissakes, that is as big a whopper as anything President Obysmal told.

Don’t you worry dumb little Johnny, Big Daddy Gugmint is going to take care of you!

The pot calling the kettle black.

Heard a rumor Frank was trying to worm his way back into politics now that the heat on him has died down. Jumping off a sinking ship might be a way to further that goal.