Liberal politician loves the only liberal society in the Middle East. Why is that a problem? 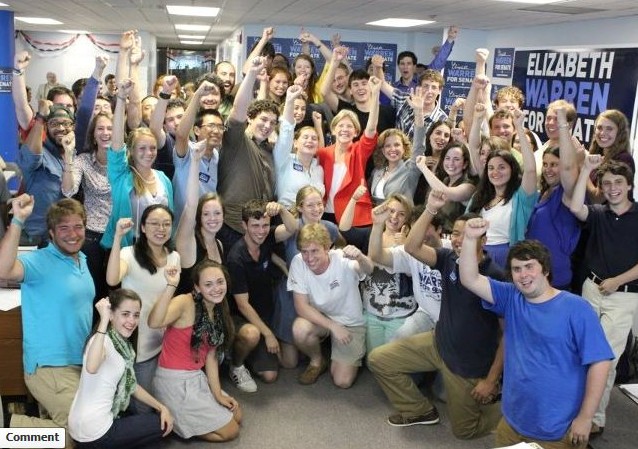 Warren long has made sense when it comes to the Middle East, in her strong support of Israel and her understanding of the neighborhood in which Israel lives. Whatever her other positions, we should at least acknowledge when she is right.

And she did so again the other day:

But when the man in the green Hawaiian shirt stood up, Warren went from voicing her support for those local causes to defending her vote to send $225 million to Israel in its ongoing conflict with Hamas.

“We are disagreeing with Israel using their guns against innocents. It’s true in Ferguson, Missouri, and it’s true in Israel,” said Harwich resident John Bangert, who identified himself as a Warren supporter but said the $225 million could have been spent on infrastructure or helping immigrants fleeing Central America.

“The vote was wrong, I believe,” he added, drawing applause from several in the crowd.

Warren told Bangert she appreciated his comments, but “we’re going to have to agree to disagree on this one.”

Warren said Hamas has attacked Israel “indiscriminately,” but with the Iron Dome defense system, the missiles have “not had the terrorist effect Hamas hoped for.” When pressed by another member of the crowd about civilian casualties from Israel’s attacks, Warren said she believes those casualties are the “last thing Israel wants.”

“But when Hamas puts its rocket launchers next to hospitals, next to schools, they’re using their civilian population to protect their military assets. And I believe Israel has a right, at that point, to defend itself,” Warren said, drawing applause.

Noreen Thompsen, of Eastham, proposed that Israel should be prevented from building any more settlements as a condition of future U.S. funding, but Warren said, “I think there’s a question of whether we should go that far.”

For that perfectly logical and appropriate statement, Warren incurred the wrath of Glenn Greenwald.

Before Edward Snowden bestowed fame on Greenwald by selecting Greenwald to receive stolen documents, Greenwald was just a run-of-the mill Israel basher who liked to call those who disagreed with him, particlarly Jews, “Israel Firsters.” That suggestion of disloyalty was invidious.

So it was not suprising that Greenwald was among the first to lash out at Warren, saying she “sounds like Netanyahu” (which Greenwald apparently meant as an insult):

Echoing Benjamin Nentayahu (and Hillary Clinton), Elizabeth Warren’s clear position is that Israel bears none of the blame for any of this. Or, to use her words, “when Hamas puts its rocket launchers next to hospitals, next to schools, they’re using their civilian population to protect their military assets. And I believe Israel has a right, at that point, to defend itself.” Such carnage is the ”last thing Israel wants.” The last thing. That, ladies and gentlemen, is your inspiring left-wing icon of the Democratic Party.

Israel should, of course, be a liberal and progressive cause. A nation that, while not perfect, has a far better human rights record than those around it, which has been under religious fanatical attack since its creation creation by groups which hate Western concepts of liberty, and which treats women and gays with equality.

But because of a decades-long propaganda campaign of demonization, some (but certainly not most or all) “progressives” are all too happy to team up with Islamists and secular Israel haters like Max Blumenthal and Rania Khalek:

Dave Weigel, who gave no indication of his personal opinion, titled his article about the reactions in a curious way: Elizabeth Warren Sides With Israel, Not With the Liberals Who Keep Daydreaming About Her. Why wouldn’t liberals be daydreaming about a liberal candidate supporting the only liberal society in the Middle East?

Paul Waldman at the liberal American Prospect said Warren’s statement made her an “just an ordinary politician” as if that were a bad thing in this context:

For now though, and at least on this one issue, Warren doesn’t seem like the brave crusader challenging the consensus of the powers that be and forcing change; she seems more like an ordinary risk-averse politician. You might want to adjust your expectations accordingly.

i’m actually stunned that she’s not reflexively anti Israel. The coin of the realm for progressives is victim-hood and the Palestinian propaganda machine has successfully made them the greatest victims in recorded history. Big props to her for getting this right.

“One swallow does not a summer make. Proverb: You should not assume that something is true just because you have seen one piece of evidence for it.”

Hey, who am I to argue with that quote of Aristotle?

I’m surprised by her pro-Israel stance as well. Part of me wants to be a cynic, thinking Warren is doing this help the Democrats from hemorrhaging Orthodox Jewish voters to the Republicans.

But it is absolutely the correct position. There can never be daylight between Israel and the United States. Israel’s position for peace, for a Two-State solution, is Israel’s opponents MUST recognize Israel’s right to exist, period. If they can’t accept that, everything else is academic.

Wait for it. Watch for a complete reversal of her opinion of Israel.

Liz, Liz, Liz…..didn’t I teach you anything? You don’t take any positions, ever! Let the lemmings project their hopes & dreams on you. That’s how you win elections, babe. — Barry

Libs offended by her vocal support for Israel will remember she also claims Cherokee heritage, nod their heads with a wink, and hush.

I’m happy about anyone vocalizing support for Israel, but lib or conservative, let me see your actions not just hear your words.

They’ve been doing that for free all these years. Now we have to pay them?

Your IRS Tax Dollars at Work.

Wow, there are a lot of pale faces in that picture. Are they all members of Liz’s tribe?

And did you notice the youthful ignorance at her feet? Isn’t that child abuse?

Glenn Greenwald is wrong 100% of the time, so having him oppose you is a sign you’re on the right track.

But something is wrong with Warren’s group photo. Somehow an Asian guy (?) sneaked in there, and the guy on the far left with the headband and glasses could even be a Negro.

Something is amiss with her staff screening process.

Is it just me, or do a lot of Israel Haters seem to have traditionally Jewish surnames? My Jewish friends, even the liberal ones, are pro-Israel. Is this maybe a northeastern Jewish thing? Serious question.

Remember: Israel never have a better friend than Pres. ScamWOW.

Just ask any of his myrmidons.

Just like Diane Feinstein, Warren goes for common sense. I do not like her positions on most things, but this time she told the truth.

So, does this mean Lizzie gets kudos on Wikipedia?

and that’s the strangest “White Power!” salute I’ve ever seen.

Obama sounds like “Nellie Oleson” on “Little House on the Prairie” – whine whine whine all the while doing very nasty things.

She should send her prog friends a casserole of Okie crab dip and then make kissy kissy.

Even a blind squirrel occasionally finds a nut.

(Should I reverse ‘squirrel’ and ‘nut’?)