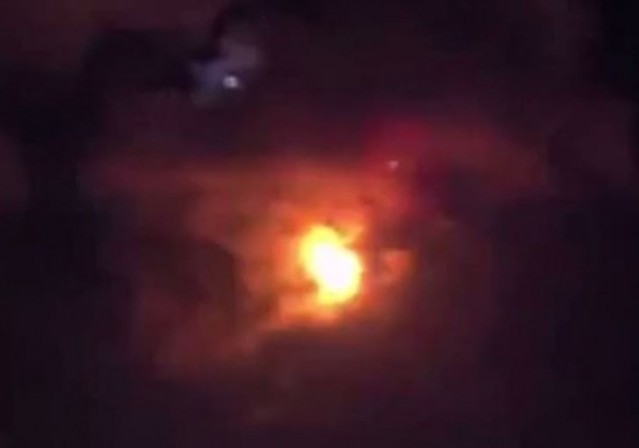 After weeks of rocket fire into Israel by Hamas, Islamic Jihad, and other terrorist groups in Gaza, Israel launched what it calls Operation Protective Edge.

As usual, Hamas and the others fire the rockets from the middle of heavily populated civilian areas (photo), thereby using the civilians as human shields. They also fire rockets indiscriminately at Israeli cities, not even pretending to target military objectives. Its a double war crime — hiding among civilians to target civilians.

Israel will go to great lengths to avoid harming civilians, but has no choice but to attack the rocket launchers and terrorists hiding among civilians. Because Hamas and others use civilian homes to store weapons and fire rockets (just like Hezbollah in Lebanon) Israel sometimes has to target homes — but when it does it does what no other army in the world does, it alerts the residents in advance:

Eyewitnesses on the ground in the Gaza Strip reported that a home in the village of Khan Yunis was destroyed completely after an Israeli intelligence officer phoned the family residing in the home and warned them of an incoming attack, the Hamas interior ministry said.

So expect Israel to be blamed should there be civilians harmed, even though it is those who exploit civilians as shields to fire rockets who are to blame.

Remember when missile defense was denegrated as “Star Wars” and mockingly referred to as trying to hit a speeding bullet with another bullet?

The system cant knock down all the rockets, but it can make a difference in protecting key civilian populations.

This video shows Iron Dome knocking rockets out of the air over the Israeli city of Ashdod.

It is interesting indeed how one doesn’t hear the Democrats mock missile defense any more. I think that all ended the day we slagged one of our falling satellites as a demonstration of what we could and would do to a North Korean missile.

it is way past time for Israel to clear out Arabs from its borders. it is wasteful and dangerous to send planes and helos to drop precision bombs. much wiser and cheaper to rely on counter-battery radar and massive artillery attacks in reply to every bomb. the dense city locals of the missile launchers should no longer be off-limits. if women and children get killed, tough titty. as General Phil Sheridan said during the Indian Wars [re destroying villages] “Nits make lice.”

For DECADES Democrats ridiculed the notion that missile defense was possible.

Complete morons. Every. Last. One.

It would be nice if it works.

I recall similar claims for the Minuteman batteries deployed as protection against the Scud and Al Hussein missiles Iraq fired at Saudi Arabia and Israel during the first Gulf unpleasantness. Despite spectacular success rates claimed during the action, later examination of missile wreckage indicated that few, and perhaps none, of them were actually destroyed by Minuteman. Most of the Iraqi missles seem to have fallen apart in flight without any help, probably due to ill-advised modifications to increase range.