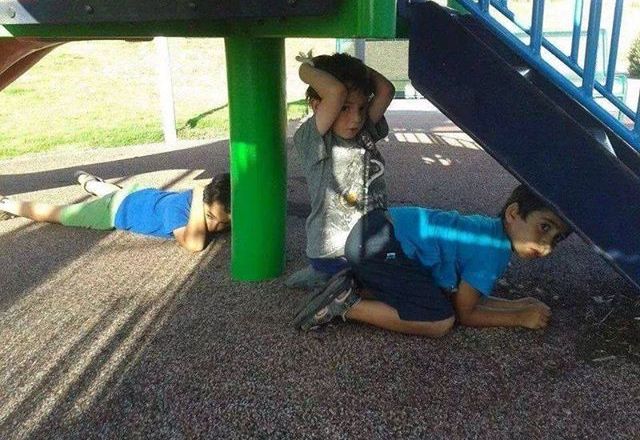 The Times of Israel sums up the casualties so far.

As of Saturday afternoon, the death toll in Gaza from Israel’s Operation Protective Edge had climbed to 127 people, after Israeli forces struck 60 targets overnight Friday and into Saturday; Israel had no breakdown on the proportion of civilian and combatant casualties. Among the dead was a relative of former Hamas prime minister Ismail Haniyeh, named as Nidal al-Malash, who the Israeli army said was in a terror cell that was hit as it prepared to fire rockets at Israel.

No Israelis had been killed by rocket fire as of Saturday afternoon, though several were injured, including an Ashdod man badly hurt in a rocket strike at a gas station Friday. A Haifa woman suffered a fatal heart attack dashing for shelter on Friday.

The Times also notes that Prime Minister Benjamin Netanyahu said “that all Gaza casualties were ‘the responsibility of Hamas,’ since the Strip’s Islamist rulers deliberately put Gazans in harm’s way by firing on Israel, hiding out, and storing weaponry among the civilian population.”

In an implicit admission of Netanyahu’s charges, Hamas told Gaza residents not post photographs of rockets being fired from their neighborhoods to social media. Also as the IDF tweets: 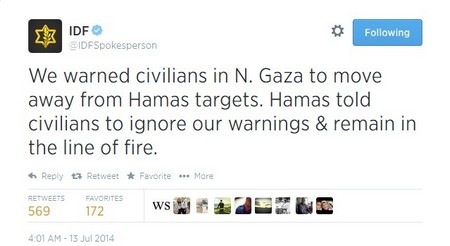 Mandy Nagy posted the other day that Hamas’s stated policy is to encourage human shields. Early reporting on Operation Preventive Shield showed that this is exactly what Hamas does.

Laurie Blank, a law professor at Emory University wrote Getting the Law Right on the Israel-Hamas Conflict. Two paragraphs are worth noting:

First, reports have described Israel’s comprehensive system of warnings to civilians before launching strikes in Gaza as “contentious” and suggest that it is motivated solely by the desire to evade potential war crimes charges. Under the law of war, warnings are designed to protect civilians by giving them the opportunity to leave an area of hostilities and seek safety. Examples of such warnings include radio announcements, leaflets, or other generalized communications. Israel’s use of individualized, specific warnings by phone and text goes far beyond what the law requires — it is hard to imagine how they could possibly be described as “contentious,” instead of unprecedented or protective. …

Second, Hamas has announced that it is launching rockets at Haifa, at Tel Aviv, at Jerusalem and other Israeli cities. Not at military bases, army units, communication networks or any other military target, but at cities populated by hundreds of thousands, even millions of civilians. The law of war requires that parties distinguish between military and civilian targets and only attack military personnel and targets. Deliberate attacks on civilians and indiscriminate attacks — attacks that are incapable of distinguishing between legitimate targets and civilians — are prohibited and are war crimes.

Meshal shuttling between Qatar and Turkey, underscoring the key role both US allies play in support of Hamas.

On a video provided by the IDF, a pilot aborts an attack when he spots civilians near a target.

Four Israeli commandos went into Gaza to destroy a target.

According to the IDF, a force of IDF naval commandos set out to destroy a long-range rocket cache and launch site near Gaza City, in the northern Gaza Strip.

The force encountered Hamas fighters belonging to the group’s armed wing on Sudaniya Beach. Hamas claimed early Sunday that the encounter was not accidental; the fighters had ambushed the IDF soldiers.

According to unconfirmed reports from Hamas sources, three Hamas fighters died in the ensuing firefight.

Ynet reports that a teen was critically injured in Ashkelon by an explosion. A 50 year old was also injured.

In a statement issued Saturday, Baird accused Pillay of focusing her comments on Israel and said that is neither “helpful nor reflective of the reality of this crisis.”
Baird says there can’t be any “moral equivalence” between a democratic state like Israel and Hamas, which he calls a listed terrorist organization with a blatant disregard for human life.
He says Israel’s military has taken extraordinary steps to reduce civilian casualties.

On his Facebook page Friday, Prime Minister Netanyahu told of his conversations with world leaders.

The pace of attacks in this operation is double that of Operation Pillar of Defense and the military strikes will continue until we can be certain that the quiet has returned to Israeli citizens. I would like to make it clear that no terrorist target in the Gaza Strip is immune but it must be pointed out that Hamas’s leaders, commanders and activists are hiding behind the residents of Gaza and they are responsible for any injury to them. The difference between us is simple. We develop defensive systems against missiles in order to protect our civilians and they use their civilians to protect their missiles. And this is the entire difference: They fire indiscriminately at our civilians and our cities in order to attack them. Sometimes they hit soldiers by mistake. We strike at their armed forces and sometimes we hit civilians by mistake.

I made this point – and many others – clear in recent days in the conversations I have held with major world leaders. I had a good conversation last night with US President Barack Obama, also with Russian President Vladimir Putin. I had good talks with all of them, with German Chancellor Angela Merkel, Canadian Prime Minister Stephen Harper and British Prime Minister David Cameron, and of course with French President Francois Hollande. To all of them I said something simple – no country would accept its civilians being fired at without a harsh response. I said that I would not allow Israel’s citizens to live in this reality. No international pressure will prevent us from operating with full force against a terrorist organization that calls for our destruction.

Isr. Ch. 2 News now confirming that the rockets fired towards Hadera and Nahariya came from #Gaza.

Khaled Abu Toameh reports that Egypt, despite some criticisms of Israel, wants Israel to destroy Hamas.

True, there are still many Egyptians and Arabs who sympathize with Hamas, mainly because it is being targeted by Israel. But over the past week, there are also different voices coming out of Egypt and some other Arab countries — voices that publicly support the Israeli military operation against the Islamist movement in the Gaza Strip.

This is perhaps because a growing number of Arabs and Muslims are fed up with the Islamist terrorists who are imposing a reign of terror and intimidation in the Arab world, particularly in Iraq and Syria. They see the atrocities and massacres committed by Islamists on a daily basis in Iraq and Syria and are beginning to ask themselves if these serve the interests of the Arabs and Muslims. …

The reaction of some Egyptians to the Israeli military operation has shocked Hamas and other Palestinians. As one Hamas spokesman noted: “It’s disgraceful to see that some Egyptians are publicly supporting the Israeli aggression on the Gaza Strip while Westerners are expressing solidarity with the Palestinians and condemning Israel.”

Geektime, an Israeli tech website, interviewed the Iron Dome team. (Their identities are secret and are referred to by letters. All are graduates of the Technion. All speak with pride in their accomplishment.) The whole article is worth reading but here are a few paragraphs:

In 2004, the Israel Ministry of Defense issued a call for proposals for a system to intercept short-range rockets. A team of experts in the Ministry’s R&D Agency (MAFAT) assessed 24 proposals and Rafael’s Iron Dome, capable of operating in all weather conditions, was selected as the most suitable.
The challenge was to develop a system capable of identifying aerial threats – mainly rockets – and eliminating them autonomously. H. explains, “Our system includes a sensor that locates the threat, a command and control center that analyzes the rocket’s trajectory and its damage potential, and an interceptor (missile) that eliminates it. It’s a very complex system. Qassam rockets are comprised of make-shift components, and their trajectories are very ‘wobbly’ rather than smooth.
Imagine a coke bottle flying several times faster than the speed of sound on an irregular course. Intercepting it seems farfetched.”

“Beware of rashness, but with energy, and sleepless vigilance, go forward and give us victories.”
Abraham Lincoln, January, 1863

Hamas proposes to “sacrifice our souls and dearest [possessions] in the path of Allah. ” This quote is found in the introduction to the Hamas Covenant.

They know their path is hirabah (unholy war: war against civilians is forbidden in Islam, just as it is in the Geneva Conventions. They acknowledge that their path is sinful.

It is good for the IDF to point this out.

Only when Hamas and Hezbollah are carpet-bombed out of existence and every Palestinian is sent packing to Qatar or the UAE or even to Iran, will there be any peace in Israel.

Israel’s message should be, “Either we peacefully co-exist or you will no longer exist.”

This tactic is nothing new for Hamas. They’ve been launching from hospital parking lots and elementary school playgrounds for years, praying that the IDF would trace trajectory and return fire so video of the resulting carnage could make the worldwide evening news. The IDF is left with few effective relief options other than to hunt them down with ground operations and close air support. Soon you’ll begin to hear the bleeding hearts cry about proportional response and a need for Israeli restraint as a means of saving the terrorist’s skin yet again. You’d think that sooner or later the Israelis would tire of this game and seek a more permanent solution.

It’s all so very predictable anymore.