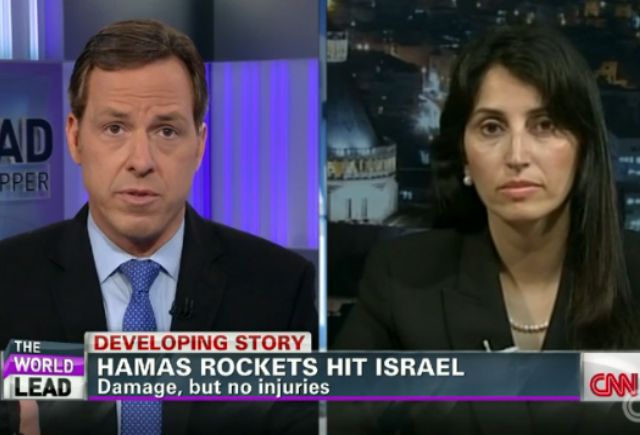 CNN’s Jake Tapper on Thursday interviewed Diana Buttu, former legal adviser to the Palestine Liberation Organization, concerning the current conflict between Hamas and Israel. The interview got a bit…uncomfortable…as Tapper challenged Buttu on some of her responses.

TAPPER: Why is Hamas launching rockets into Israeli population centers and are any other Palestinians trying to stop them from doing so?

BUTTU: Well Jake, I think it’s important to lay out the sequence of events. There’s been a collective punishment that’s been imposed on the West Bank ever since the three Israelis had gone missing. And since that time the Israelis have been placing a blockade and siege on the Gaza strip and then later bombing the Gaza strip. So this is not coming out of a situation of nothing. Now in order to stop it, there have been attempts by the president to broker a cease fire. He’s called the United States, indicating that he wants a cease fire to be taken into effect, but Prime Minister Netanyahu has made it absolutely clear that he does not want to have a cease fire. So given this sequence of events, I’m afraid that we’re actually going to see things get worse in the short time.”

TAPPER: Okay. I’m glad you got out your talking points there. Let’s get back to my question. Why is Hamas launching missiles into population centers of Israel? And are any other Palestinians trying to stop them from doing so?

Tapper further pressed Buttu on her response to reports of civilians being used as human shields:

TAPPER: Israeli government officials say they are trying desperately to avoid civilian casualties, and there are reports of the spokesman of Hamas – we actually have the video of him – going on Palestinian television urging people to serve as human shields, staying in their homes, even if the IDF is warning people in those homes – because they’re Hamas officials’ homes – that they’re going to be destroyed, they’re telling them to stay there. Do you at all find that reprehensible, using women and children to be human shields to protect these homes?

BUTTU: Jake, I haven’t seen that video but if that were the case that would be reprehensible. I think that the bigger picture is that this isn’t the case. What we have seen over the course of the past couple of days, more than 80 Palestinians killed, the population of the Gaza strip – 43% of it is under the age of 14, and we’ve seen that half of the people who have been killed are women and children. The idea that Palestinians use their children as human shields is racist and reprehensible. And the idea that the Israelis are somehow spewing this and we’re to believe it is also racist.

TAPPER: Diana, it’s not racist that we have video of the Hamas spokesman on television telling people to stay in their homes, that it’s an effective way to make sure, to fight off the Israelis. That’s not racist, that’s just a fact.

Watch the full exchange below, video via Washington Free Beacon.

Here’s my idea for a cease fire: Cease firing.

Hamas has never “ceased firing”. There may be an occasion when rockets aren’t fired into Israel for a few days, but that’s only because they’ve run out of Kassams and have to wait for production to catch up.

No, that won’t matter. We have to get those rockets out of there.

Some years back I heard a conversation between a woman and a male Palestinian college-xchange student. (They were sitting right next to me.) I don’t know what they were discussing, family, life plans, etc. but the topic of having children arose.

The male Palestinian said he wanted 10 or 12 children. Without thinking, it came to me.

The children were to be “cannon folder!”
Just the impression that came automatically to me and my opinion – in a still free country.

I guess the facts have a racial bias, to twist an old phrase?

If Tapper keeps this up, I might add CNN to my favorite channels list. I will probably not stop by the network intentionally, but I might come across it while scrolling the guide or flipping channels. I have enjoyed his conversations with Hugh Hewitt, and he seems pretty even keel as an anchor.

The pigs are flying for the moment, but I doubt they will stay in the air.

Time to make Palestinians on a daily basis defend the war crimes that their leaders commit in their names.

Good to see Tapper do this to the polished Buttu, one of the worst dissemblers.

Interesting how she uses Leftist talking points about racism and of being offended to deflect criticism. They know who their friends are.

Everyone wants to ride the coattails of America’s well-developed grievance industry.

The Muslims are wise to it, and have been pretending to be a maltreated race for at least the past decade.

Thank God they are. I don’t feel like dying.

Last night my wife called me from the states to tell me the siren went off; someone had texted her. Turns out it had gone off an half-hour earlier, and I had slept through it. And I’m at the very, very edge of the range, which is getting larger and larger. Imagine what it would be like in Gush Dan (the Tel-Aviv area) where there are very few “open spaces” for the rocket to hit.

She never answered the question.

I must have lived too long, because this phenomenon of politicians and politicos cavalierly spouting easily disprovable lies over and over to the press and public is something I just don’t remember seeing a couple decades ago. Did the internet do this?

She’s a lawyer. I think that answers the question.

No, it’s an old tactic in interviews. Just because one is asked a question doesn’t mean one has to answer it. A response is needed, but not necessarily an answer.

During WW2, the US would drop leaflets over targets, both in Japan and Europe, warning of bombing raids in the near future. Not always, of course; it would depend on the target and what sort of defense was expected. But sometimes the warnings were very explicit; a certain factory would be bombed on a specified date and at a specified time. This was, of course, to warn people to be elsewhere when the bombs arrived. However, there was no implication that there would be no bombing if people failed to bug out in time. The target was going to be bombed, “human shields” or no.

After the “racist” comment his next question should have been, “And why do you assume that Arabs as a race would believe in using men and women as human shields when the charge here is only that the terrorist organization Hamas has called for it? Is it that you believe all Arabs are terrorists so you conflate the two?”

The fact is that a lot of Palestinians are fine with using women and children as shields because it creates more innocent casualties they can point at to try to make their enemies look bad. She knows it (and probably supports it), we know it, Tapper knows it, the Israelis know it and Hamas knows it. I think that just leaves the gullible left in the West as the target audience, and really, they need no convincing.

One hopes that at least one of Jake Tapper’s missiles of truth will hit home with the infidels: Abbas, Hamas, PLO, BHO, BDS and all of the other evil doers who want to destroy Israel for the sake of Palestinian –Islamic Jihad- dominance of the region.

what the hell is racist about repeating their own words?
damn stupid woman.

What aggravates me is that she seems to think the rest of the world is stupid-er. But that’s further proof of her being really stupid.

Regarding the rest of the world, her surmise is correct. There are a few islands of sanity in part of the Anglosphere.

What she’s doing usually works. It’s dishonest and vile, but stupid it ain’t.

“The idea that Palestinians use their children as human shields is racist and reprehensible.”

That is correct. The Palestinians are racist and reprehensible.

But we all know what is going to happen next, some CNN affiliated reporter or photographer somewhere in the middle east is going to get killed by a bomb or a sniper, and word will get back to CNN that it was no accident or mere coincidence.

The Palestinians don’t want “human shields”. Want they want is plenty of civilian deaths. They want women and children to die so they can paint the Israelis as heartless killers of little children. They want more volunteers who will want to strap bombs to their bodies to “get even” with “Joos”. They want to win a propaganda victory with useful idiots in the countries of the West and they really don’t care how many children die in the process.
Thousands of years have past but nothing seems to have changed. They are still a people eager to sacrifice their children to their pagan gods.

The solution is to level the Gaza Strip. Then pound the rubble into gravel. Lastly, blow the gravel into sand. That will solve the Gaza Strip terrorism problem.