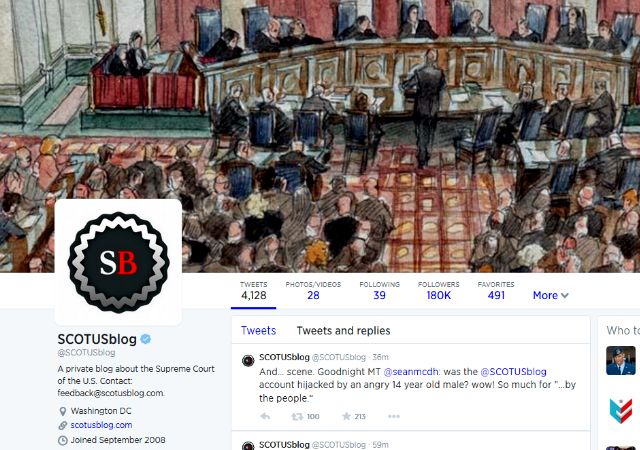 By now you’ve seen Monday’s Supreme Court decisions here and here, which – quite predictably – set off a nuclear reaction on Twitter.

Some of that outrage was misguidedly directed at SCOTUSblog by angry tweeters who thought they were surely tweeting the actual Supreme Court Justices. But as many of us know, and others have also pointed out, SCOTUSblog Is Not the Supreme Court.

I never realized that the serious minds at SCOTUSblog had such a sense of humor, which was on full display in how they handled the barrage of hate wrongly dumped into their timeline. You must go visit SCOTUSblog’s Twitter timeline to see all of their responses, but a handful of them are featured below. 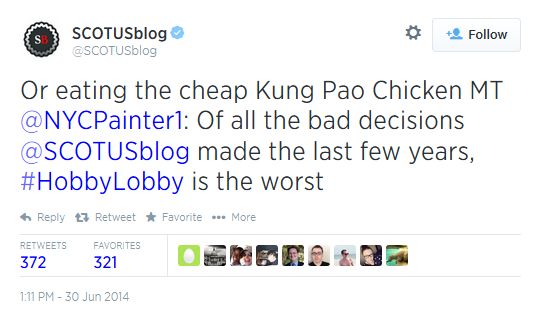 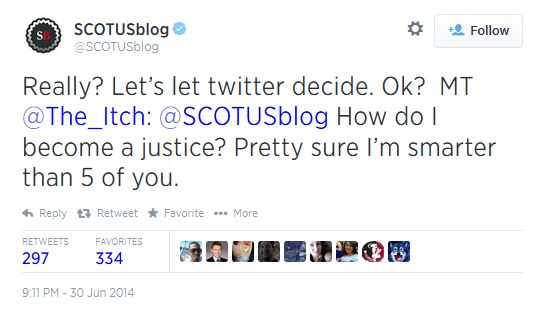 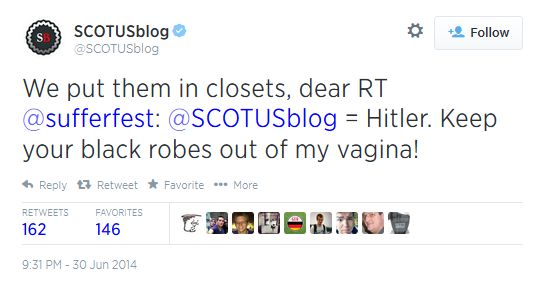 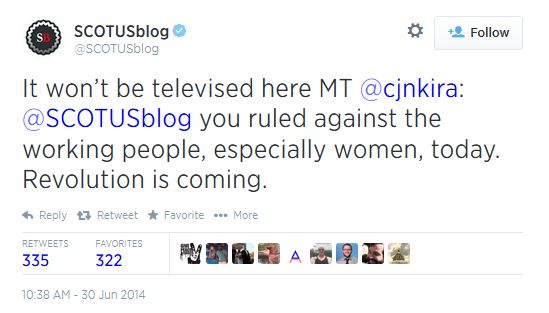 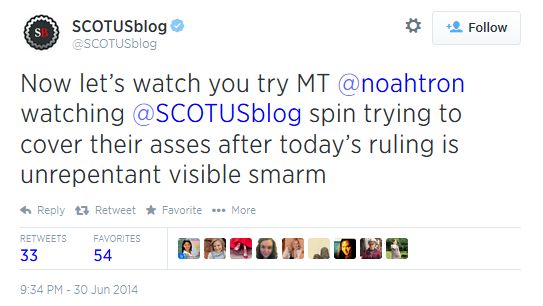 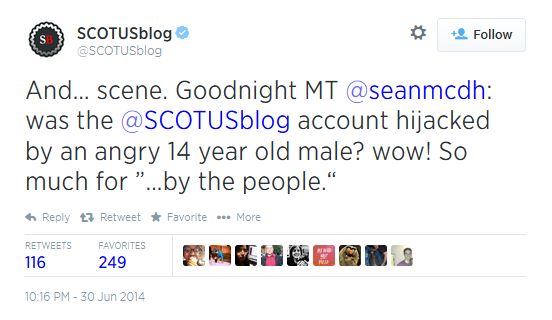 how can one ask for a more completely tasty yesterday…???

That was absolutely hilarious!

SCOTUSblog trolls must be the low information voters I hear about.

This ruling is being mischaracterized in the local papers. Today’s San Diego Union-Tribune is carrying a front page article by Robert Barnes of the Washington Post titled “Court Limits Birth Control Rule. In 5-4 decision, justices find that some employers can refuse to cover contraceptives under the health care law.” The article does not include the name of the case, which would be essential for easy cross-checking.

Of course, readers here know the headline is misleading, because Hobby Lobby did not even ask to avoid paying for ALL contraceptives, but only for abortifacients. The sub header on page A3 is “Breadth of ruling concerns dissenting justices.” However, the breadth of the ruling has to do with worry that the decision would be applied to such concoctions as “religious objections” to “equal pay for equal work.”

There’s more wrong with the article, which looks very much like a press release from the losers.

The U-T attempts to balance the Washington Post article with another article from one of its own reporters, “Outcome means little to many bosses, workers.” Although this article contains more balanced information, its position, and far less prominent heading make it just a bit harder for the reader to connect the two stories.

Headline-only readers will be deceived as to the substance of the news.

A letter to the editor of the paper contains a similar set of mischaracterizations of the opinion.

Our legislators know how to write constitutional legislation. This particular piece of legislation was written in secret, without even prior publication of the draft text to the Republican party in time to read it before the vote. The objections to it are based on long-standing, well-known religious beliefs. The fair conclusion is that Nancy Pelosi wanted to pass unconstitutional legislation in hopes that it would stand, or be too expensive to challenge. Shame on her, and on the Democratic Party at the national level.

The Hobby Lobby case involved a mandate that was promulgated by HHS. It wasn’t written as part of the Affordable Care Act. The Act delegated much (far too much) power to the Secretary of HHS. So even if the ACA (a/k/a Obamacare) had been posted online before its passage (as Obama once promised), or if there had been adequate time for Republicans to read the Act and raise objections to it before its passage, no one would have been able to challenge the specific mandate at issue in the Hobby Lobby case, because it wasn’t contained in the Act.

Heh! The other shoes are starting to drop!

The tweet comparing SCOTUSblog to Hitler might be the funniest thing I’ve seen in awhile. It’s amazing on so many levels.

I read and follow SCOTUSblog and the funny thing to me is that they’re pretty much firmly on the left of center…getting a taste of the looney left.

Democratic voters are all stupid.

Especially those with academic backgrounds, but this seems to be a smorgasbord of the stupidity of the Left.

When liberals’ certainty of personal correctness collides with ignorance on the proper role of the Supreme Court, the sense of betrayal breeds deep anger.

What is liberal is right and it’s the SCOTUS job to make it so.

I bet you think that womyn should have to pay for their own food and clothing.

That would depend on who owned them.