The Washington Post bought into that bizarre Gaza equation, but it’s not quite working out 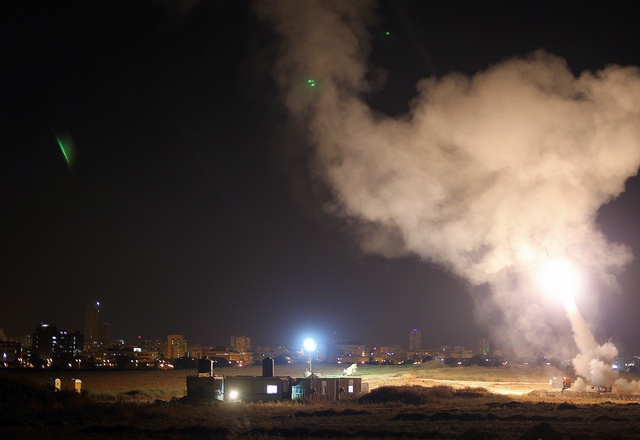 Last month the Editorial Board of The Washington Post endorsed the Obama administration’s support of the unity deal between Hamas and Fatah.

After reading, Restore trust to douse the fire in Gaza, the Post’s take on Operation Protective Edge, it’s clear that the editors are still stuck in an intellectual rut. One paragraph in the editorial stuck out as hopelessly uninformed and illogical (emphasis added):

Those goals hardly seem worth the bloodshed — nearly 50 people reportedly had been killed in Gaza by late Wednesday, including civilians — or the economic losses to both Palestinians and Israelis. In fact, neither side wanted war. Hamas had just agreed to back a united Palestinian government with the West Bank-based Fatah movement, while Israel quietly offered a truce before the escalation of hostilities on Sunday.

As so often happens in the Middle East, acts by extremists forced these events: the kidnapping and murder of three Israeli teenagers allegedly by Hamas militants apparently acting on their own; the revenge murder of a Palestinian by Israeli thugs; the initial firing of rockets from Gaza by small militant groups challenging Hamas’s authority.

First of all how is Hamas’s participation in the unity government a sign that “it didn’t want war?”

More to the point, Hamas joined in a Palestinian unity government in April, which would seem to at least potentially shift its incentives a bit away from militancy and toward cooperation.

In addition to those promoted the fantasy that the unity deal would moderate Hamas, others simply ignored any possible negative implications of the Fatah-Hamas merger.

The unity agreement didn’t require Hamas to give up its arms or accept Israel’s right to exist. By not giving up its genocidal ideology or its arms it showed that it was adopting the “Hezbollah model,” meaning that it was “establishing a better-armed entity-within-an-entity in the midst a weaker central government.” In fact rather than moderating Hamas, “Hamas officially interpreted it as an opening for militant activities of all kinds,” according to David Pollock of the Washington Institute for Near East Policy.

To be sure, the editorial is correct that Israel offered a truce. But it wasn’t “small militant groups” that refused the ceasefire, it was the big militant group, Hamas, that did.

How do I know this? Because there’s a consensus among Israeli analysts that Israel exercised restraint. In fact Nahum Barnea, usually a critic of Prime Minister Benjamin Netanyahu, wrote, “The restraint exercised by the current cabinet is really exceptional: It’s unusual both compared to right-wing governments and compared to left-wing governments.”

The Hamas leadership decided to ignore the possibility of a ceasefire and instead challenged Israel to “bring it on.” These irresponsible leaders are criminals to their own people. I can honestly say that Prime Minister Binyamin Netanyahu did not want to escalate this war. It is criminal that these Hamas leaders, some sitting in hotels abroad and others safely hiding underground in Gaza, have chosen to put the innocent people of Gaza in the line of fire.

Hamas did not abandon its ideology.

Hamas did not abandon its weapons.

Hamas did not stop firing.

That’s why there’s a war now. To argue that “extremists forced these events” without acknowledging that Hamas is such an extremist is to be divorced from reality. I expected better from the editors of the Washington Post.

Let me understand the Post. Killing 50 of the enemy – which may or may not have included some collateral damage – is too great a price to pay for getting rid of rockets that can reach all of the way up to Haifa (where I live, BTW)? How about 100? 1000? 100,000?

Does the Washington Post understand the concept of war? Of an enemy? Probably not. Perhaps if we hinted that Hamas were Republicans…

PS – Please note that there was a fight in the cabinet about this. Unless Bibi was sure that Hamas would respond, then what the heck was he waiting for? He was going to leave them there?

The ONLY thing produced in the PA territories is violence, hate and invective. When a nation seeks nothing but to destroy another people, another sovereign nation and, ultimately its own youth and future, it cannot be seriously considered as a viable nation state.

In effect, the PA is nothing but a rogue state in the same category as North Korea, and for anyone to take it seriously is sheer folly. Instead of embracing the PA, Hamas and their murderous ways and giving it the full rights of nationhood, the US and the World Community as a whole, need to treat it as a pariah until it submits and assumes the corresponding responsibilities of a nation.

At some point, intelligent, reasonable people must assume that the PA, Hamas and the rest of that ragtag bunch of miscreants has forfeited all rights to anything but cowering in holes while civilization pounds them with an iron fist.

We must remind the world that the Palestinians were run out of both Jordan and Lebanon, because they were unable to do anything but destroy, despoil and deface. Arafat’s ‘Black September’ was named for the righteous and severe ass-beating he and his ‘roaches took at the hands of King Hussein’s Arab Legion!

The Hamas Covenant is very clear about Hamas’ goals and tactics.

Unless and until this document becomes inoperative, nothing will change. Unless and until terrorist documents such as the Hamas Covenant (Hezbollah has one, as well.) are recognized in Islam as the blasphemy against Allah and Islam that they are, there will never be peace, because this document states eternal war as its goal.

Professor, I apologize for sounding like a broken record on this topic, but I view the failure of english-speakers to take this document seriously as a catastrophic strategic mistake. This is a live, operative document, and not some over-the-top flowery piece of Arabic nonsense that can be ignored. Further, this document purports to characterize Islam and Allah in the most revolting terms. It needs to be exposed and answered in religious terms. This has not happened to the extent needed, in part because the Muslim Brotherhood and its offspring kill clerics who openly challenge its principles.

After reading that vapid editorial I scratch my head and wonder what sort of world the Washington Post, New York Times, etc. lives in? If rockets were falling in McLean and Falls Church Virginia, or in Georgetown, D.C. they would be in a major panic and demand that we nuke the enemy.

No, they’d just blame the Tea Party, the Koch Brothers and Talk Radio and demand that 0bama be given supernatural powers under some sort of “enabling act” such as the Reichstag gave Hitler.

I thought he already had supernatural powers …

“In fact, neither side wanted war.”

Now THAT is an interesting lie.

Despite a lot of Hollywood tripe to the contrary, you don’t slip in the bathroom and find yourself accidentally at war.

And, again contrary to a lot of drivel on the subject, one side DOES decide to embroil combatants into a war, with the other provided the choice of responding or perishing.

If the Palestinians did not want war, they would not have a war. Israel would be delighted to help them have a “not war”.

The 0bama Media (formerly known as ‘The Free Press’) would probably accept either, (a.) Israel made Hamas mad and rocketing Israel was a reasonable response, or (b.) someone accidentally shot off 400-500 rockets with explosive warheads.

“In fact, neither side wanted war.”

As a U.N.-designated “terrorist organization,” it has no legitimacy. However, by officially joining a group that the U.N. seems bound and determined to view as an independent nation, they gain some measure of legitimacy.

Nobody in the international community can credibly support terrorists, but a war between nations comes complete with sympathizers who support their cause as a legitimate arm of a legitimate government. IOW, they lose nothing, but gain international support by fighting against another legitimate nation the rest of the world seems to love to hate: Israel.

Inviting Hamas into a unity government with Fatah without requiring it to reform its conduct and rhetoric, was sheer idiocy on the part of the Palestinian government. Hamas reaps greater legitimacy and U.S. tax dollars as a result, yet, it hasn’t changed its embittered, violent conduct one iota! It’s the same thing that happened with the “rapprochement” with Iran and the U.S. — you don’t deal with Iran until it modifies it substantively modifies its behavior and rhetoric; otherwise, its akin to giving in to the childish histrionics of a screaming toddler.