The mostly nonchalant reaction to Fatah’s embrace of Hamas

The mostly nonchalant reaction to Fatah’s embrace of Hamas

And why Abbas gets away with it. 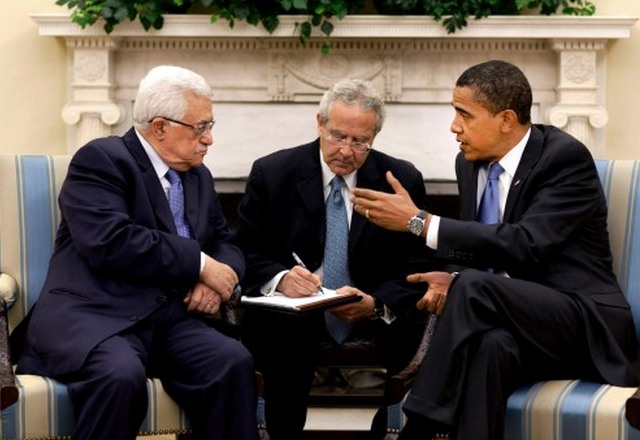 In the wake of Fatah’s embrace of Hamas earlier this week there has been a very interesting reaction. Actually, the reaction has been interesting because it’s been mostly non-existent.

Though the New York Times and Washington Post have reported on Fatah’s betrayal of the American sponsored peace process, neither has published an angry editorial denouncing Palestinian President Mahmoud Abbas for endangering or destroying the peace process. Few news events shatter perceptions more clearly than when a supposed moderate embraces extremism. And even given the fraught history of past Fatah-Hamas agreements the symbolism here is unmistakable. A week before Secretary of State John Kerry hoped to have a framework agreement, the Palestinian Authority came to an agreement with the terrorist Hamas organization and not with Israel.

Let’s do a few comparisons.

In March 2010, when Vice President Joe Biden was visiting Israel, Israel’s Interior Ministry announced plans to build houses in Ramat Shlomo. Even though Ramat Shlomo is part of Jerusalem and a part of Israel’s capital that everyone expects will be part of Israel in any final agreement with the Palestinians, the announcement precipitated a diplomatic crisis between Israel and the United States. An editorial in the New York Times two days later stated about the announcement, “And it is hard to see the timing as anything but a slap in the face to Washington.”

In 2010, the Israeli announcement didn’t and wouldn’t change anything about the Middle East materially and yet the New York Times criticized the Israeli action. That Fatah-Hamas agreement, on the other hand is a game-changer. Israel dropped its objections to the PLO when the PLO renounced terror. Of course, under Arafat that declaration was meaningless as he encouraged terror against Israel even after Oslo. Abbas was supposed to be the peaceful one. But now he’s embraced a terrorist organization.

Exhibit B: The Obama Administration

As noted above, the Ramat Shlomo announcement caused a diplomatic crisis between Israel and the United States. At the time, the New York Times reported Clinton Rebukes Israel on Housing Announcement. A paragraph in the article read:

Such blunt language toward Israel is very rare from an American administration, and several officials said Mrs. Clinton was relaying the anger of President Obama at the announcement, which was made by Israel’s Interior Ministry and which Mr. Netanyahu said caught him off guard.

What was the administration’s response the Fatah-Hamas agreement? As Daled Amos noted, there’s an expression of “disappointment,” but not of anger. There’s talk of “both sides exercis[ing] maximum restraint and avoid[ing] escalatory steps,” but that hardly conveys outrage when it is one side that undermined the very basis of the peace process.

Last week The High Representative of the Union for Foreign Affairs and Security Policy Catherine Ashton made a statement condemning a fatal Palestinian terror attack and Israeli “settlement” activities. But as JoshuaPundit points out, the areas Ashton cited actually were Jewish owned until they were acquired by force, by the Arabs, in 1948. For example:

So in your world, Gush Etzion is a ‘settlement’ after decades of existence on legally purchased land, while a few caravans parked illegally for a matter of weeks on Israeli land with the EU’s connivance that you give the name of ‘Jabal Al Baba’ is a ‘community’? It seems obvious that you have one set of rules for Jews and quite another for everyone else,and there’s a word for that, isn’t there Lady Ashton? And isn’t it more than just a little hypocritical to ‘especially deplore’ the Israelis confiscating what was obviously an attempt by the EU to unlawfully create facts on the ground in what at best can be considered a ‘disputed’ area? If ‘humanitarian aid’ was the purpose, why not put those caravans somewhere in Area A, where the Palestinian Authority controls things? Again, one might almost suspect you of – heaven forbid – bias.

This week, according to news reports, Ashton is pleased with the Fatah-Hamas reconciliation.

“The EU’s top priority is that the current talks continue beyond April 29,” said a spokesman for EU foreign affairs head Catherine Ashton, referring to the deadline for a US-led effort to broker a Palestinian-Israeli peace deal.

Such an understanding was “an important element for the unity of a future Palestinian state and for reaching a two-state solution [with Israel],” Mann added.

But Ashton, as the EU’s foreign minister, is also a party to the Quartet. The Quartet’s position is pretty clear as The Tower observed earlier this week.

It is the view of the Quartet that all members of a future Palestinian government must be committed to nonviolence, recognition of Israel, and acceptance of previous agreements and obligations, including the Roadmap. We urge both parties to respect their existing agreements, including on movement and access.

With no evidence that Hamas has changed its goals, the Fatah-Hamas agreement represents the radicalization of Fatah, not the moderation of Hamas. And while its true that the lack a unified leadership of the Palestinians undermines any hope for peace with Israel, it is also true that if the unified leadership doesn’t renounce terror or accept Israel, that also would extinguish any hope for peace.

The position of the EU endorsing the Fatah-Hamas unity agreement, as expressed by Ashton’s office, isn’t just illogical, it violates the principles the EU once claimed were necessary for peace.

Of course there’s a reason for the silence in the face of this Palestinian rejection of peace.

Take heed: Twenty years of fruitless talks have led to nothing. There is no document that contains any real Palestinian concession with Abbas’ signature. None. There never was, and there never will be.

This is the reality that the peace processors refuse to accept. Since 1993 the Palestinians have made no significant, lasting concessions to Israel. (And the ones that they made were violated repeatedly.) If this is true they’ve been spinning their wheels for the past twenty years or more. It’s much easier to blame Israel that to re-examine their own assumptions. Israel can always be persuaded or pressured to make some concession to keep the illusion of a process going. So the charade continues.

David, tell me one thing: is Mahmoud Abbas Jewish?

“Take heed: Twenty years of fruitless talks have led to nothing. There is no document that contains any real Palestinian concession with Abbas’ signature. None. There never was, and there never will be.”

Could that be due to the Hamas Covenant, which contains an agreement to exactly that effect?

The Hamas Covenant contains an agreement that NO agreement or concession to Israel’s existence shall have an effect.

There will be no peace until the Hamas Covenant is repudiated.

There will be no peace until Islam is destroyed, and the Koran and Hadiths burned. The problem isn’t the Hamas charter; it is Islam and the Koran which says Muslims should have no non-Muslims for friends, should lie to non-Muslims, and should kill Jews and Christians. Lex orandi, lex credendi, lex vivendi.

Send a nuke over there and kill every Arab and Muslim why don’t you? You my friend watch way too much Sean hannity.

“A week before Secretary of State John Kerry hoped to have a framework agreement, the Palestinian Authority came to an agreement with the terrorist Hamas organization and not with Israel.”

Obama’s distaste for Israel has been evident for years, and the American Left’s rather fickle turn against Israel has been going on since the 1990s at least. The predictability of the West’s reaction to Palestinian inflexibilty, public anti-Semetism, and violent attacks largely allows the Palestinians to continue along this this route.

It’s a real no-win situation for everone there right now, and I have no idea of what can realistically make things better.

BTW was Fatah ever really not radical in the past?

I think the good Baroness needs someone to inform her that this is reconciliation under Hamas, not under Fatah, and that makes a really big practical and political difference…

So that is where Ashton went after starting war in the Ukraine .

There is just Syria & Israel standing between the Great Northern Islamic Migration .

The EU is the most stupid organisation perhaps to exist . Again it will be only the working class of Britain & the Russian peasants left to fight . The rest will be slaughtered drinking their EU true branded champers & duck friendly pate.

Keep things the way they are….hawkish politicians like it……what else matters??? Status quo stays and any disagreement is anti Semitic and anti Isreal

I can’t believe these people are advocating religious war against Muslims you all are blemish inch the conservative movement.