They mean what they say 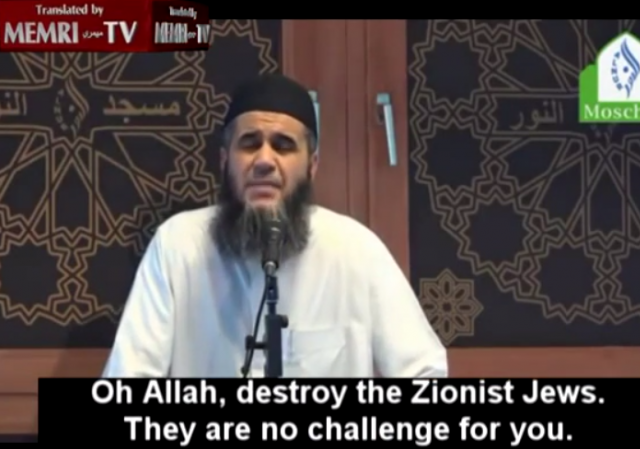 From an Imam in Berlin — can you tell his words apart from tweets of pro-Boycott Divest and Sanctions professors and campus speakers?

From my Twitter feed keeping track of events today:

"The shouts included 'Jews back to Birkenau' and 'Drop dead, you Zionazi whores.'" So very, very glad I left Boston http://t.co/MjJsfXpnsW

If you go to a synagogue instead of a consulate to protest Israel you are an anti-Semite. Pogroms taking place in France. In 2014.

Horrid "@jj34: Police is protecting the #Sarcelles synagogue from the mob – could turn violent any minute now pic.twitter.com/wZUOQP4hWS"

This is Paris a few minutes ago near the Basilica of Sacré Cœur. 'Death to the Jews' chanted followed by a riot. pic.twitter.com/dWoWFCYpwU

From July 14, but one I had not seen before:

How frightening. Are any of the non-Muslims in Paris protesting? It seems from all the pictures that it is the immigrants to France, those who are Muslim, who are doing these Nazi salutes, etc. Is this correct, or just a false impression?

My friend in Nevada, who is Jewish, is disgusted, alarmed, and very vocal about this horrible situation in France….yet it seems that no one is countering it with any success with the TRUTH. And it is clearly not just France – it is Germany, Belgium, and here……

Are we really that far gone? Did we learn NOTHING from the horrors of the WWII conflict, the Holocaust?

Or is it just that, like Chamberlain and the Progressive appeasers, those with the power to stand up, to speak out, choose to be blind to this horror, this evil?

The Europeans have relied upon the United States for security. Many progressive Europeans behave like immature kids, acting with disdain and lack of respect for the US. Weak European leadership (in general, there were and are exceptions like Thatcher), never corrected the portrayal of the US, so never helped Europeans to understand not only how grateful they should be, also used the security provided by the US to avoid spending money on their military and essentially pandered to different sectors in creation of the welfare state. This has severely impacted the culture of taking responsibility, which is what is sorely needed to clear up the mess.
The anti-Israel marches were banned in Paris but they marched anyways and there will probably be no consequences and no arrests for defying the police ban, a very disturbing erosion of public safety and the rule of law.

The Napoleonic Wars, World War 1 & 2, the retreat from the colonial frontiers and all the conflagrations in between – Europe’s best and brightest perished long ago. How strange to see the nation who produced a Wilberforce turn towards sharia law with it’s moral slavery. The robust vitality of an ethical moral Europe is gone. Bodies left rotting on the battlefields is where Western civilization spent it’s strength. Marx, Engels, Lenin have made a caretaker government seem desirable; Masters (Muslims) and serfs (citizen slaves who pay the Jizya tax)…

As for the persecution of the Jews and Israel. There are spiritual forces involved, motivating the human pawns. It seems to be that from the death of King David until now, the people of Israel have been chased from pillar to post – but a remnant, a thread of the original cloth, always remains. After 2,000 years Israel remains – the best testimony for the validity to God’s faithfulness to Abraham.

Balaam, that evil prophet, learned from a dumb ass about going in the wrong direction. It would be good for the Muslims to learn the same things.

Are we really that far gone?

“Are we really that far gone?”

Yes. In the name of political correctness, there will be the slaughter of millions.

I lived in Paris for a year during college from 1990 to 1991. I remember the call to prayer being blasted over loud speakers at Cite Universitaire several times a day. The French yielded to every demand in the name of multiculturalism and political correctness, they are reaping what they sowed. The same has happened in the US, it’s just fermenting.

I went to a liberal university (UCSB) and most of my professors were liberals. I remember one in particular railing against political correctness and the politically correct terms being forced on everyone, because to her it is thought control. How right she was.

Why does a “Mighty God” need a bunch of Yahoos to do his/her job ?

Captain Kirk: “Why does God need a starship ?”

“They mean what they say”. Very true. Speech matters and we need to take the intent seriously.

It just boggles the mind that this is taking place in Berlin, the epicenter of the Holocaust. The self-reinforcing circle of European anti-Semitism, multiculturalism, the welfare state and radical Islam accelerates. Who will apply the brakes?

The Euro=peons are reaping what they have sown with indiscriminate immigration policies that allowed large numbers of unskilled muslims to move in and start getting welfare.

Our own large urban centers are seeing the future, with leftist totalitarians filling in for the islamists.

It is what is known as a “wake-up call” for us all. Time is running short for drastic policy changes on a broad front of issues.

Err, that last photo. Those aren’t real Nazi salutes, they’re the ones used by that comedian. I don’t have his name off-hand and I don’t care, but while he’s considered an anti-Semitic comedian (in the sense of anti-Jew), well, it’s just not a real Nazi salute. I’ve seen plenty of those in old movies to tell the difference.

The nazi salute is banned in several European countries. The gesture you see in the photos, was created by the French political agitator Dieudonne as a substitute Nazi salute, termed the “quenelle”.
The intent of the gesture is very clear, and it has been widely adopted by those that wish to publicly express their approval of the Holocaust. The people who make this gesture also derive satisfaction from using it as an expression of defiance against the authorities who wish to censure and censor the anti-Semitism. And they have a point. It is much easier for European political leaders to ban the nazi salute instead of debating the argument and taking a public stand and addressing the toxic levels of intolerance in the European Muslim community.

May this become a massive global movement…in every city across the earth, may people of good will stand up to Islam’s bullies.

I did see a screaming UK headline ‘nazi death trains ‘ but it referred to the refrigerated carriages used for the victims of MH 17 . Only a /small % of comments protested the odious comparison to living people being sent off to death & the necessary transportation of corpses. Did they think they were going to get up & walk ?

I am sorry but the uber emotionalism I predicted is being fanned up .there is no room for your concerns of anti semitism in Europe unless it is Putin.( whose older brother died in the Leningrad siege )

It is dangerous madness imbued with a death cult . Europe won’t take any notice unless there are many dead bodies that they can present & feign shock .

It’s so crazy, it could work…

I remember that; if you read your OT Bible, the original nation of Israel reached to the Tigris & Euphrates…..not so far-fetched, if you think about that.

This is also good to expose the lies of Palestinian and anti-Israel, anti-semitic propaganda:

Narrated by the fantastic Bill Whittle. 🙂

The left-wing wanted to exploit democratic leverage to marginalize their fellow countrymen and women. Unfortunately, the immigrants, legal and illegal, do not want to assimilate. Now Europeans will have to cope with the fallout from Leftists’ ambitions.

Nazi salutes in France? Have they forgotten the attrocities of two World Wars and the fact that their country was under seige by the very goons who practiced the Nazi salute?