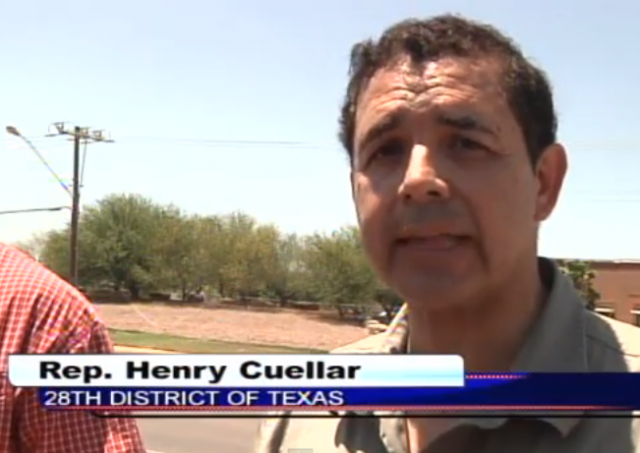 One of the most vocal critics of President Barack Obama’s lackluster response to the exploding southern border crisis is one of the few Southern Democrats left in Congress: U.S. Rep. Henry Cuellar (D-TX).

Cuellar was among the only lawmaker in his party to smack down the President last week during the “will he or won’t he visit the border” phase of the crisis.

“He’ll be 500 miles from Dallas and, in fact, he’ll be 242 miles from Austin, Texas, at the other fundraising he’ll be having,” Cuellar told Andrea Mitchell on MSNBCS, referring to Obama’s destinations during his two-day trip to Texas beginning Wednesday. “So, he’s so close to the border. And let me say this. When I saw — and I hate to use the word ‘bizarre,’ but under the circumstances — when he is shown playing pool in Colorado, drinking a beer, and he can’t even go 242 miles to the Texas border?”

“If he had time, with all due respect, to have a beer and play pool like he did in Colorado last night, then I think after the fundraisers he should make time to go down there,” he said.

Here’s how The White House treated Cuellar’s criticism. They told him to shut up. But Cuellar isn’t backing down.

Cuellar knows what he’s talking about and is an important bi-partisan voice on the immigration issue. He isn’t an open borders-only ideologue when it comes to immigration — and he’s seeing first hand, in his own Congressional district, how border towns are collapsing from the weight of the latest influx of illegals.

In fact, Cuellar was in Central American over the weekend and was told by leaders in those nations that they “want their children back.”

Rep Cuellar says this is the msg from Central American ldrs on UAC's: "We want our kids back. But we need assistance in getting them back."

So for Cuellar, the question isn’t what to do — it is how to do it.

A week ago, President Obama implored the Texas Congressional delegation to step up and help address the crisis at the border. Today, the bipartisan duo of Sen. John Cornyn and Rep. Henry Cuellar are doing just that as they introduce their bill to swiftly return young migrants to Central America. Their proposal is being met with sharp criticism from many Democrats and most immigrant-right groups, who say the U.S. has a moral responsibility to help kids who are fleeing their violent home countries.

Cuellar outlines the details of the so-called HUMANE Act on his House website.

Some highlights of the HUMANE Act include:

So what’s the next step for this legislation? Again, from ABC News’ The Note’s report:

The House could take up the bill first, opening the door to the first real debate about the humanitarian crisis at the border. The White House knows that its $3.7 billion emergency spending request faces a steep climb without some significant reforms. Will any other Democrats sign onto this plan?

The answer, at least from Harry Reid today, seems to be no.

All those little brown people have to be carefully managed to have any value to Baracula and the Collective. They have to be kept in play.

Sending them back would simply solve the problem. Whose interests would THAT serve…???

This isn’t a “solution” to the crime wave on the border, it’s just another expensive way to do nothing. Kabuki Theatre, Act II.

Why not just call it the SURRENDER act? At least they’d get credit for honesty.

In truth, no one in the open-borders coalition wants anything approaching comprehensive immigration reform. Advocates are embarrassed about the present mess at the border not because thousands of foreign nationals, many of them unescorted children and teens, from Latin America, without skills or education, are flocking illegally across the border after largely taking the amnesty cue from Barack Obama, but because they are doing so in such dramatic fashion that the influx has aroused the ire and worry of the American people and exposed illegal immigration to be a callous and illiberal enterprise, promoted by a coalition of self-interested political operatives, commercial concerns, and ethnic chauvinists.
http://www.nationalreview.com/article/382679/illiberal-immigration-reform-victor-davis-hanson

Americans’ anger over this is building. Like the Japanese who bombed Pearl Harbor, Jarrett and her puppet Obama are about to awaken a sleeping tiger . . . .

justice needs to be swift and uniform. send them all back today.