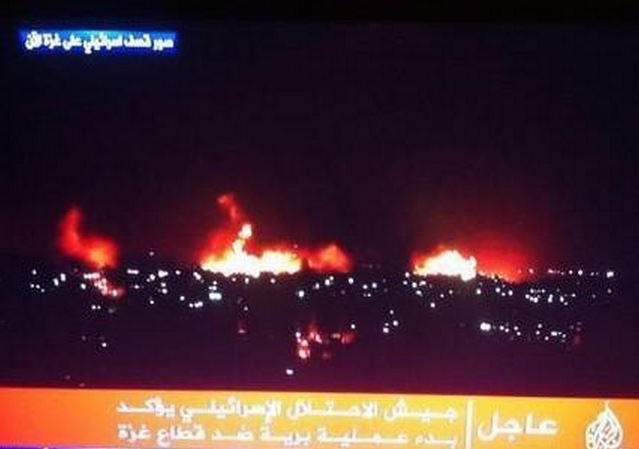 There are numerous reports that after heavy artillery shelling along the border, Israeli troops have entered on the ground in Gaza. Israel i24 News reports that the Prime Minister’s office has authorized a ground incursion to destroy tunnels.

It’s not known if it is a limited incursion or something larger. It comes the same day that Hamas launched an unsuccessful attack through a tunnel near an Israeli Kibbutz.

As it’s obviously a fluid situation subject to misinformation, we’ve embedded numerous news and local sources on the Twitter Feed below, so you can keep track as events develop.

People who wanted an end to Israel were playing with Palestinian lives https://t.co/YeIoXadXmg

Same ppl who demanded no compromise w Israel will be on campus complaining abt consequences https://t.co/YeIoXadXmg

BREAKING NEWS: A large IDF force has just launched a ground operation in the Gaza Strip. A new phase of Operation Protective Edge has begun. 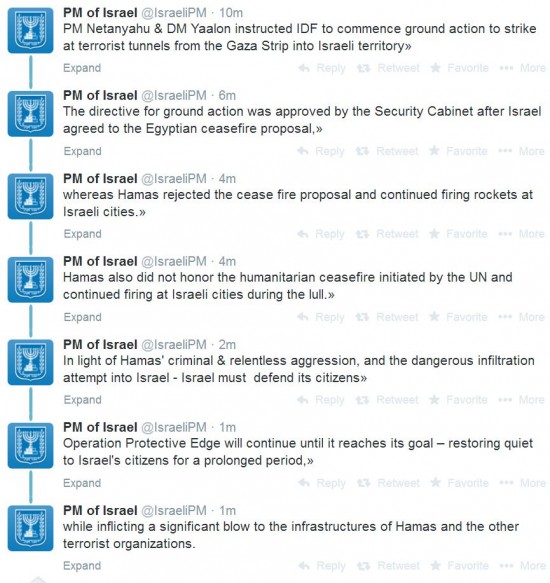 Just now on @Channel2News: Egypt announces that Hamas is reponsible for this conflict.

With unprecedented backing from #Egypt, Israel has a free hand to act in #Gaza's border areas, and could even stay there after ceasefire.

MK Bennett: 'IDF soldiers: The entire nation of Israel is with you. Have courage. Return safely.' – http://t.co/nlySzaC4kc

We know that Hamas terrorists are operating underground, and that's where we will meet them.

Stay glued to CNN so you know what is not happening.

Note of interest from Twitter feed: “Jonathan Schanzer @JSchanzer Just now on @Channel2News: Egypt announces that HAMAS IS reponsible for this conflict.”

if the reporting is anything like what occurred in the Honduras in 2009, I would suggest the need to watch an alternative. (Yes I saw what was happening on CNN in Honduras when in the USA and I was very disgusted).

There is one in English.

The situation actually gives me some hope that the world is finally coming around.

While the hardcore anti-semites are still bloviating and pontificating with their lies, a large part of the world is simply shrugging their shoulders and saying, “meh, Hamas started it, Israel can get rid of them and we’ll all be happy”.

Please thank Israel for doing the research and development on the missile defense system. I’m happy that it has worked so well for them. It probably saved us a lot of money too.

After firing nearly 2000 rockets from Gaza into Israel this year the weather forecast for Gaza now calls for a metallic overcast with scattered lead.

May G-d protect the IDF

Why do I get the feeling that ground penetrating radar mapping of the existing tunnel structure has been finished, a strategy for collapsing both mid- and end-points has been finalized, and current operations include a checklist of tunnels that are checked off as they are closed. Hopefully the bunkers that Hamas higher-ups are hiding in are on the short list of bunker-buster bomb targets.

Collapse the tunnels with all of Hamas’s leadership trapped inside.

I know! I know! Because Bibi’s in charge and not Obama?

HAMAS has built tunnels for terrorists instead of shelters for citizens. That tells you all you have to know about their priorities as well as who is the aggressor.

IDF has no choice at this point but to go in and destroy every tunnel and underground arsenal they can find.

They have been there for decades with the full knowledge of Egypt & Israel.

Therefore, the Israelis themselves are complicit in the Hamas rocket attacks and have no right to complain, let alone do anything about it, right?

I never said that . I stated. Their existence is known.

From what I have heard directly from army sources from Afghanistan ,is that most commando operations are tunnel operations .

Things have not changed. Since for example the battles of Dover Castle where the French & Scots dug under in the 12 th Century & the were tunnels dug out from the Castle . The best tunnel fighters won & both took the idea along for the Crusades.

I never said that . I stated. Their existence is known.

HAMAS has built tunnels for terrorists instead of shelters for citizens. That tells you all you have to know about their priorities as well as who is the aggressor.

IDF has no choice at this point but to go in and destroy every tunnel and underground arsenal they can find.

They have been there for decades with the full knowledge of Egypt & Israel.

And… what? Your point is as clear as mud. If Israel had “full knowledge” for “decades”, does that imply approval? Should they have done something about them long before now? They shouldn’t be complaining now if they tacitly allowed Hamas to use them for “decades”?

What was your point?

My point is exactly that .Egypt And Israel both know it . There are documentaries filmed on how the trade blockade is avoided. – by moving goods through tunnels .

This way Gaza is supplied with the goods / services embargoed by Israel & the Bedouins ply their trade . All are happy . Occasionally they are crushed/ blocked by Israel but new ones are dug .the latest ones can be driven through with golf carts .piled high with goods at quite some speed.

Tunnels are nothing new in Israel . Prof. Jacobsen took a tour of the post 1973 unearthed ones under Herod’s Temple & there are many more to be opened up. I think Jewish kinda liked them too when under siege/ rule.

HAMAS cares not for the Gaza Strip dwellers.

Not unless you count their cruel Nazi-like ways of intentionally using them as human shields and cannon folder for human bombs.

Egypt has kept the Sinai agreement which Morsi threatened to break .& not only that , job forces with Hamas .

Traditionally it is the Bedouin who policed / commercially & profitably managed the trade in & out of Gaza. The Egyptians just let them do their thing & all in all the Sinai agreement held up.

I had family working in the resort industry & got some warning of the MB tide coming & they left in time . It was touch & go .If the US backed MB had stayed , there would definitely have been war.

Sometimes democracy does not work.

JackRussellTerrierist in reply to BannedbytheGuardian. | July 18, 2014 at 1:42 am

I believe this is why obamullah shunned Mubarak and forced him out – to get a government in that would undermine Israel and thus help his terrorist buddies.

The world was shocked when obamullah shunned Mubarak. Those of us who know what obamullah is really about were not.

BannedbytheGuardian in reply to JackRussellTerrierist. | July 18, 2014 at 2:17 am

I wS one of the very few on the guardian comments to be sceptical of the ‘Spring’ in Egypt . It looks like Egypt really has a food problem etc & I thinks he west wanted for it To expand / move on into. More wealthy Libya . Redistribution at work . Mubarek would not do it so he had to go.

It has not worked out nearly ax well as they expected. Those guys in Libya now ain’t sharing & there are many fewer Egyptians sending homepage packets as expat workers, than under Ghadaffi.

At least Sisi and the Egyptian people are not afraid to call Morsi and Obama’s Muslim Brotherhood friends terrorists and Obama a friend of terrorists.

We would not have had Obama in office either in 2008 or 2012 without corruption on the part of the Republicans, CIA and FBI who did not vet him, but covered up his true alliances and ideology – and without massive voter and election fraud.

Only a despicable conspiracy of corruption could undermine and continue to undermine the safety measures built into our system.