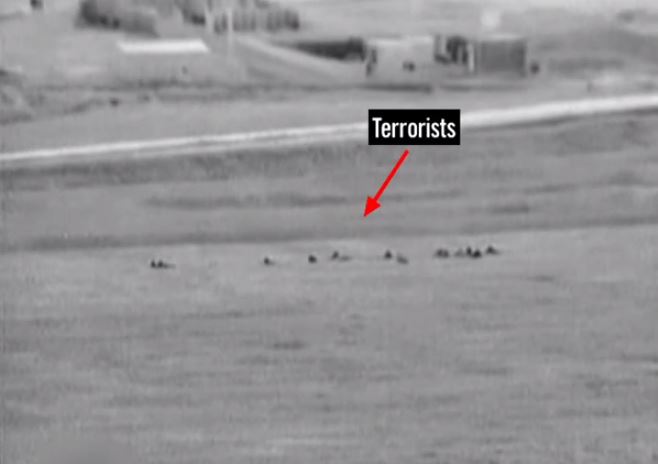 In the early morning hours today, prior the implementation of the humanitarian ceasefire, the IDF spotted a terror cell infiltrating from Gaza. Aircraft targeted the terrorists in a dramatic video.

The Israeli military said it foiled an attempt by Gaza militants to infiltrate a kibbutz through a tunnel early Thursday, hours before the two sides briefly halted fire for a humanitarian lull in which Gaza residents tentatively stepped into the streets, hoping to find one of the handful of cash machines that opened for the first time since the conflict escalated July 8. …

An Israeli military spokesman said it was not immediately clear if all the militants from the tunnel had been killed. Residents of the Israeli border community nearest the exit of the tunnel, Kibbutz Sufa, were told to stay in their homes for several hours after the initial confrontation, which began around 4.30 a.m.

The Times also reported that already a number of mortars have been fired into Israel since the ceasefire began.

MAP: Opening of a Hamas tunnel inside Israeli territory. Terrorists tried to use the tunnel to attack Israel today. pic.twitter.com/AruS3e1JTV

Lt. Col. Peter Lerner, an IDF spokesman, said the IDF believed at least one militant was killed in the strike and that the remaining fighters appeared to have returned to Gaza through the tunnel. Footage released by the IDF showed a number of individuals creeping slowly toward what appeared to be a hole in the ground. A separate shot showed an explosion from an airstrike on the tunnel entrance.

Lerner said the attack “could have had devastating consequences” and said the militants were armed with “extensive weapons,” including rocket-propelled grenades.

Hamas’ military wing claimed responsibility for the infiltration, saying in a statement that “during the withdrawal after the completion of its mission,” the militants were struck by “jet fighters.” It said the group returned safely, however, and that no one was killed.

PHOTO: Weapons of Hamas terrorists & the tunnel they used during their attempt to infiltrate Israel today. pic.twitter.com/J6RVEQ2SLB

IDF Spokesman Brig.-Gen. Moti Almoz said the military received an alert at 4 a.m. on Thursday, and that intelligence units detected an attempt by terrorists in Gaza to enter Israel through an underground tunnel.

“Units arrived at the area, and terrorists were apparently surprised. They began returning to the tunnel. The air force began attacking them from the air,” Almoz said. “We understand there are casualties [among the terrorists]. The full picture is not yet known,” he added.

In October 2013, Israel discovered a smuggling tunnel and BuzzFeed posted pictures of the tunnel. Ask yourself, what if Hamas put all of that engineering know how and resources into building a functioning society instead of dedicating them to destroying Israel?

“Hamas’ military wing claimed responsibility for the infiltration, saying in a statement that “during the withdrawal after the completion of its mission,” the militants were struck by “jet fighters.” It said the group returned safely, however, and that no one was killed.”

Yeh, it sure LOOKED like they ‘completed their mission and returned safely’ from those clips 🙂

Ya, that was chuckle. If anybody survived that attack they probably can’t walk, hear or see any longer.

One killed? Just one?

Considering that there was nothing above ground level to deflect the blast, and in at least one view debris was flying towards the camera platform, I’d say all they found was body parts from one terrorist. I’ll wager that dogs took the rest away, and in 24-36 hours they will be properly buried laid (somewhere) to rest! 😆

I wonder if Isreal knew all along about the tunnel and allowed Hams to waste time, resources and effort building it before destroying it.

Nothing I’ve heard indicates that they had advanced knowledge.

Can you IMAGINE how pissed off 1,264 black eyed virgins are to wake up down there ? 🙂

Or, according to many translations, “clean, white grapes”.

Imagine the disappointment. Sexually frustrated and thwarted for a lifetime, so you decide to become a martyr and at last have some real fun. You get to Paradise and they give you… GRAPES!

Mohammad tells the crestfallen martyrs, “So what did you guys expect, women? Ha! That’s what you get for listening to illiterate imams! Now, get out of here and don’t spit the seeds on the floor!”

I wonder if there are any camels in hell for them ?

If you mean the cigarettes, one can hope that obamullah will be joining them for a smoke break very shortly.

Snatching a few hostages just before the cease fire would have been SOOOooooo groovy for the terrorists.

Or at least a little bit of face-saving.

This is the perfect environment for the Israelis to conduct a little live-fire training for their AC-130J crews. Worst that can happen is they miss and destroy a few rows of cabbage.

You could tell by how they handled themselves, how they moved, those were trained soldiers. And they were invading a sovereign nation.

No, fill the tunnel with effluent. See how many of their “brave fighters” will crawl through a mile a Israeli sh!t next time.

It already WAS filled with effluent.

Then they crawled out.

Soldiers of the Rachel Corrie Brigade of Hamas experiencing their usual luck with tunnels.