Email destruction an issue not just at IRS, but EPA too

Email destruction an issue not just at IRS, but EPA too 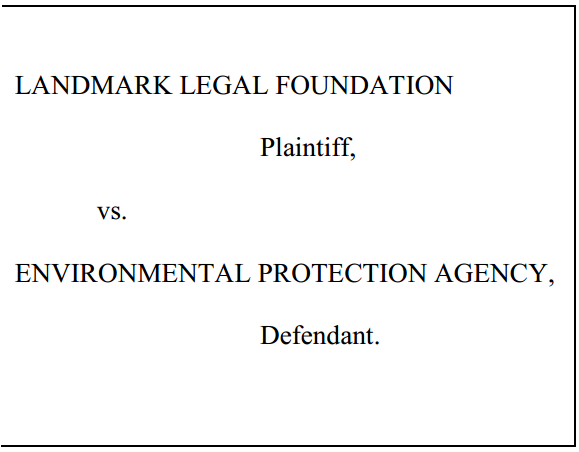 The IRS-Lois Lerner email and hard drive destruction has received a lot of attention.

Less so another possible scandal at the EPA, regarding the alleged destruction of documents requested by the Landmark Legal Foundation, with which Mark Levin is affiliated..

Fox News covered it in late June, but most of the mainstream media is absent, More missing emails, crashed hard drives, this time at EPA:

She responded, “We are having trouble acquiring the data.”

It’s not just a problem of Congressional oversight. The Landmark Legal Foundation served a Freedom of Information Act (FOIA) request on the EPA regarding attempts to influence the 2012 election by delaying damaging environmental regulations until after the election. We reported on that delay in 2013, which concerned not just environmental regulations but Obamacare also.

Landmark’s request is the latest move in the Foundation’s Freedom of Information Act (FOIA) lawsuit to force the Agency to release emails, text messages and other materials from former EPA Administrator Lisa Jackson and others who may have delayed the release dates for hot button environmental regulations until after the November 6, 2012, presidential election. Jackson, Deputy Administrator Robert Perciasepe, and other Agency officials admitted in depositions that they used their personal, nongovernmental email accounts and text messages sent and received on government-issued BlackBerries and smart phones to conduct official EPA business. The EPA was obligated under federal law to preserve and search those private emails and text messages for information Landmark is seeking, but the Agency failed to do so.

You can read the sanctions Motion here.

The problem is that the EPA faces no real consequences.

Who pays the sanctions? The US taxpayer. No EPA employee will face any kind of reprimand or punishment. Business as usual.

There needs to be a new law passed. Any employee of a government agency that intentionally does something like this is FIRED. No retirement, no pension.

Because of “administrative law”, Leviathan has become a self-bloating monstrosity.

The executive branch has seized law-making power from Congress (albeit slowly and steadily over a period of many years and without any real pushback from Congress), and now unelected bureaucrats make more rules for our lives than our elected representatives.

Kind of a nice deal for the elected representatives. “Don’t blame me: I didn’t vote for that.”

Nice deal too for the unelected bureaucrats. They can feed the monster and protect it without any real accountability.

Olinser is absolutely right! There should be real consequences for destruction of evidence.

But there should also be accountability in the rule-making process in the first place. If Congress is going to let the executive branch appropriate some of its legislative power (and this is clearly in violation of the first sentence of Article I of the Constitution…) , at the very least, the rules the bureaucrats come up with should be voted on by the people we vote to put into – or out of – office.

When must EPA respond?

Is there no honest person in the EPA or IRS to blow the lid off these obvious lies? Thank heavens the VA still has some honest whistleblowers.

I just read this report on the regime’s anti-whistleblower program:
http://www.washingtonpost.com/world/national-security/intelligence-security-initiatives-have-chilling-effect-on-federal-whistleblowers-critics-say/2014/07/23/c9dfd794-0ea0-11e4-8341-b8072b1e7348_story.html

The Obama administration is a criminal enterprise.

No hard drive is an island. Recipients of emails and holders of tape backups who don’t speak up are coconspirators.

What I really don’t understand about this is the absolute unimportance of the hard drives. I can log on to anyone computer, anyone on this forum that has an internet connection and pull up every email I’ve ever sent or received. Emails are all stored on remote servers with multiple backups in RAID arrays. These people are totally ignorant or are directly lying. Lerner sent a lot of Emails from her blackberry, Di the hard drive in the blackberry get scratched too? That would be difficult as it doesn’t have one. Stupid people piss me off.