Did not want voters to know what was coming down post-election. 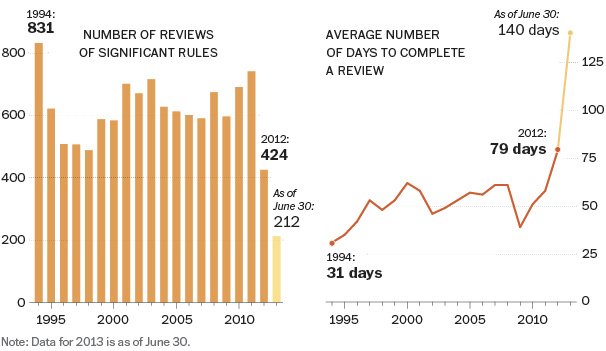 Prior to the 2012 election there were claims that the Obama administration was concealing its intentions by deliberately not moving proposed regulations forward so as to avoid campaign controversy.

Needless to say, the Obama campaign denied the charges then and now.

We reported on how delay of regulations damaged the rollout of Obamacare, Re-election 2012: HHS went quiet on Obamacare regs leading to healthcare.gov tech failure

The Washington Post reports on how organized the concealment and delay effort was, White House delayed enacting rules ahead of 2012 election to avoid controversy:

The White House systematically delayed enacting a series of rules on the environment, worker safety and health care to prevent them from becoming points of contention before the 2012 election, according to documents and interviews with current and former administration officials.

Some agency officials were instructed to hold off submitting proposals to the White House for up to a year to ensure that they would not be issued before voters went to the polls, the current and former officials said.

The delays meant that rules were postponed or never issued. The stalled regulations included crucial elements of the Affordable Care Act, what bodies of water deserved federal protection, pollution controls for industrial boilers and limits on dangerous silica exposure in the workplace.

The Obama administration has repeatedly said that any delays until after the election were coincidental and that such decisions were made without regard to politics. But seven current and former administration officials told The Washington Post that the motives behind many of the delays were clearly political, as Obama’s top aides focused on avoiding controversy before his reelection.

The number and scope of delays under Obama went well beyond those of his predecessors, who helped shape rules but did not have the same formalized controls, said current and former officials who spoke on the condition of anonymity because of the sensitivity of the topic.

Those findings are bolstered by a new report from the Administrative Conference of the United States (ACUS), an independent agency that advises the federal government on regulatory issues. The report is based on anonymous interviews with more than a dozen senior agency officials who worked with the Office of Information and Regulatory Affairs (OIRA), which oversees the implementation of federal rules.

Yet another example of the RAA-CIST!!11!! right-wing media attacking the first post-racial president!

1. what he planned to do (c.f., addressing entitlement spending)

2. what he would NOT do (c.f., ride rough-shod over Congress and the courts)

Everybody knew he was going to do this. I read about it months before it happened. Republicans said nothing.

Still waiting on a Keystone Pipeline decision. I think this has been dragging on for 5 years.

The ONE area where this administration shows competence is in something they shouldn’t be doing.

There is always an election coming up (see Hillary)

Funny thing is, they could have wrote the regs in such a way to not piss off the electorate–

They could have wrote “shall determine” placeholders, as they did with the entire law..

But, they chose paranoia….

As most dictatorships do-

If you like your plan, the secretary shall determine if you can keep it. Period.

I remember way back when I was a young driver that if you had any connections at all, you could get a ticket fixed.

Now as a senior, I can safely state that this process has come full circle as to where you can get anything “fixed” IF you can find a competent connection to affect such…

“The Washington Post reports on how organized the concealment and delay effort was,…”

I’m not in Kansas anymore.

Another fine example of why politicians shouldn’t be able to run for office while holding office — it’s too easy to for politicians manipulate policies to buy votes.

This is not a new idea — For example, back around the time of the Revolution, Pennsylvania had a rule that politicians had to take a few years off between holding office.

IMHO, screw term limits. If office holders had to have as much time working in the private sector (not counting burrOcrats or public union work, or lobbying) as holding office, that would basically result in a wholesale turnover in current monarchy running Congress and the WH.

Perhaps then we’d get some folks who understand the importance of common sense, controlling burrOcrats, balancing budgets and controlling spending…

They act like they played no part in this scam.

“…will have more flexibility after the election…”

Yes. Ditto, I think, re organizing things like your own private OFA foundation while you’re supposed to be employed full-time by the taxpayer.

Just how many asterisks will we have to put after Obama’s name in the Hall of Presidents?

Communists are taught to lie, cheat, steal and kill to achieve politican ends. So why wouldn’t one stall regulations?

Aided, of course, by his useful idiot accomplice, John Boehner.