Elizabeth Warren would be most liberal nominee since McGovern

Elizabeth Warren would be most liberal nominee since McGovern

Nate Silver’s Five Thirty Eight blog finds that Elizabeth Warren would be the most liberal presidential nominee ever if she were to run and win the Democratic primaries:

Elizabeth Warren probably isn’t going to run for or win the Democratic nomination for president in 2016, but that hasn’t stopped progressives from trying to get her to run. And it’s no wonder: Warren would be among the most liberal presidential candidates — if not the most liberal — in the modern era (since 1972, when Democrats began selecting their nominee through the caucus and primary process). 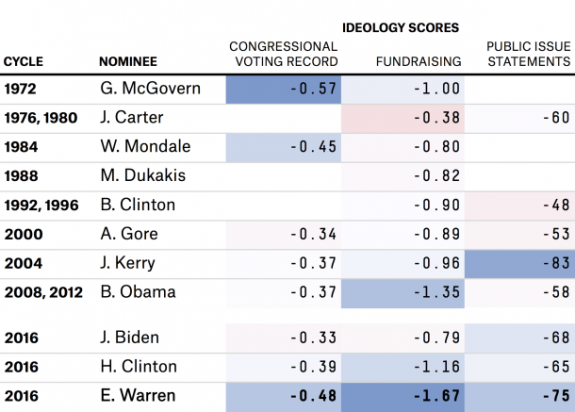 I think it would be terribly unfair if Democrats had to settle for their second choice, Hillary, when in their heart of hearts they want Liz.

True, Warren didn’t build her reputation on her own, she had, ahem, help from George Lakoff, but still she’d make a great candidate, just like George McGovern.

How RACIST of Lizzie “Borden” Warren!

…and it’s Leftist… Warren “would be the most Leftist” (as in Joseph Stalin, or Castro, or Lenin, or Mao…)

Warren doesn’t have a “liberal” bone in her body!

I’d love to see her dump the clutch, stall it out and drop it in the parking lot….what a campaign ad that would make….”Elizabeth Warren, just as fake as Fonzie, and ready to jump the shark”.

heh, last one……doesn’t she look like she is saying “wooden wooden”?

Here’s a copy of that photo that hasn’t been ‘Shopped (allegedly)!!!

Remember: Liz wrote the Eleven Commandments of Progressivism while sitting atop Hubris Mountain pretending to be Sherpa. At those heights the air is very thin, the mind plays tricks.

The “Eleven” – more of materialism’s Hope and Change moonshine. And, not exactly the actionable 1994 Contract with America.
http://www.nationalcenter.org/ContractwithAmerica.html

Next up: Liz picks thirteen disciples; the Messianic complex is handed down from ‘above’.

Warren definitely fits the adage: “Talk left and live right.” Wealthy liberals seem to be the flashiest, most ambitious, and greediest of capitalists. As Jerry Seinfeld aptly put it (paraphrasing here): “It’s easy to rearrange your prejudices when you’re wealthy.”

Hyper-Hypocrites I’ve always called them. They are the spoilt brats who should have been told “NO!” a lot more in their childhood.

maybe I am just feeling down today but I think shes going to win.
I think we’ve crossed the maker/taker demarcation line and her ability to blame businesses is going to play well.
not sure we can recover from it at this point.
I’ll keep trying but……not feeling confident about 2016.

Hey don’t count out this guy!

As a practical matter, how do you get further left than Obama? Is it even possible?

yeah, Obama may have voted “present” enough to not show up as more leftist. As president he surrenders American interests around the world, and opens our borders to the world.

But candidate Obama lied a lot. I suppose this only measures their talk, not their inner soul.

Pol Pot did it, and so did Jugo [sic] Chavez.

“Liberal” does not describe Warren.

Aside from “fraud,” “leftist,” or “fascist” would be the accurate description of Fauxchaontas.

I hope that bike she’s sitting on is an “Indian”!