Uncle Sam, that is. 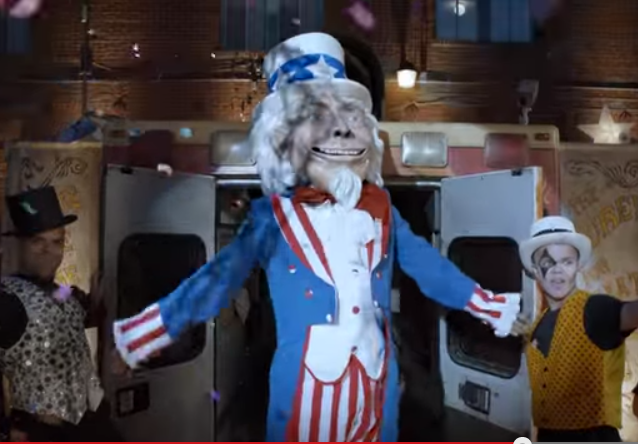 Creepy Uncle Sam, that is.

The latest is the Creepy Carnival campaign.

I don’t know what impact these videos have on the target young audience.

Using the Uncle Sam likeness shifts blame for O’care from the Dems to all of government, which would include Republicans, none of whom voted for O’care and who have tried countless times to gut O’care.

Far better to put a real face on the clown so as to rightly assign blame. While you can’t fight city hall (Uncle Sam), you can vote the real creeps out of office.

Is it any wonder when the political message gets obscured like this, voters are ‘low information’? Put a real face on creepy.

The repulsive, repugnant Republicans in the House and Senate certainly did help float this lousy takeover of our healthcare system, along with the Supremes.

You’re right that it would be better to put the real face on it. But I think the low info voters are low info enough not to think that hard about it. Most people will see: Government run healthcare IS creepy. And that’s the real point. Then, when they vote – IF they vote – they can vote for the candidates who are pushing to get the government out of the healthcare business. If they’re still thinking about it when they vote. It’s the thinking that’s the hard part…

We have witnessed a takeover of a vital part of our country’s public welfare and economy by a malevolent force.

Obama and company have used every agency of government as a weapon to punish dissent and opposition since day one of his tenure in office.

As Bill Whittle said, Obama is not an American as we understand the term.

He is an enemy, and a clear and present danger.

The daily invasion of thousands of non-mexican adults is proof of that.

Many were not fooled even before Obama took* office. (Took with the help of every kind of voter and election fraud)

Many of us vetted Obama more than our FBI, CIA and Legislators ostensibly did.

When it comes to government healthcare, I don’t think of Uncle Sam…