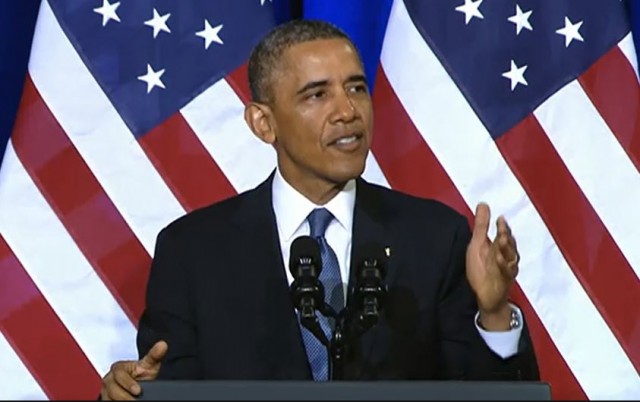 That “patriotism” push is moving into high gear, as Jeff Mason of Reuters reports:

U.S. President Barack Obama on Thursday hammered U.S. companies that avoid federal taxes by shifting their tax domiciles overseas in deals known as “inversions” and called on Congress to pass a bill to curb the practice.

During remarks to a rowdy crowd at the Los Angeles Technical College, Obama promoted what he called “economic patriotism” and made clear he believed the companies that were engaging in such practices were not being patriotic. The president was in California on a three-day fund-raising swing for Democrats.

So-called inversion deals occur when a U.S. company acquires or sets up a foreign company, then moves its U.S. tax domicile to the foreign company and its lower-tax home country.

Nine inversion deals have been reached this year by companies ranging from banana distributor Chiquita Brands International Inc to drugmaker AbbVie Inc, and more are under consideration.

The transactions are setting a record pace since the first inversion was carried out 32 years ago.

“Even as corporate profits are higher than ever, there’s a small but growing group of big corporations that are fleeing the country to get out of paying taxes,” Obama said.

“They’re technically renouncing their U.S. citizenship, they’re declaring their base someplace else even though most of their operations are here. You know some people are calling these companies ‘corporate deserters.’”

Obama said he did not begrudge companies making profits but said corporate tax evasion practices made it harder for the middle class – his target political constituency – to succeed.

The issue was discussed on Neil Cavuto’s program on the FOX Business Network last week.

I would be shocked if any professionally run corporation was shamed into buying into this BS…but I’ve been shocked more than a few times in the past 6 years.

My thinking is that this is purest demagoguery.

Which means SOME CEOs will see a benefit in giving it lip-service, but mostly it will roll off like water off a duck’s back.

Baracula will make noise, and Deemocrats with offer legislation mounting a new tax on “inversions”, which will have ZERO chance of passage.

Which will, as designed, give the Collective a talking-point to demagog. Idiots will buy it.

I would have sworn that one of the bedrock beliefs of this administration was that “corporations are not people”, and yet now I am told that they can be “unpatriotic”. I am so confused.

“Obama said he did not begrudge companies making profits but said corporate tax evasion practices made it harder for the middle class – his target political constituency – to succeed.”

There’s a lot of meat on those apparent bones.

First, how the HELL do corporate taxes BENEFIT the middle-class? Consider that corporate taxes are MERELY taxes COLLECTED by corporations. The PAYERS of the taxes are CONSUMERS of goods and services provided by the corporations. I would assert that these taxes fall disproportionately on the middle-class consumer. Plus, if you care about such things, they are REGRESSIVE in effect.

Second, the idiot who wrote that used the term “evasion”. Tax evasion is illegal. Tax AVOIDANCE is just good practice, and leaving your money around for Uncle Sugar to TAKE is not “patriotism”. If you want to GIVE it away, fine.

Third, the writing spoke an inadvertent truth with the term “the middle class – his target political constituency”. Collectivists HATE the middle-class and always have. They are constantly in a lather to destroy/diminish the middle-class. You can read all about it in Collectivist “thinkers’ works down through history.

Maybe he means that all those middle-class consumers need to have the money taken from their pocketbooks so the government can spend it on stuff that’s better for them than they would have bought. I’ve actually heard a Dem make that argument: that lower taxes are not a good thing because people don’t spend their money wisely.

The government, of course, always spends our money wisely. Spending it on high salaries and benefits for government employees is especially wise.

That a pantywaist smuck/Hamas finalist would callout others as “unpatriotic” is more than laughable – it is sick.
And, Mark Cubam is of ‘zero’ value to me.

The middle class is suffering in direct correlation to the fiscal/confiscatory/Dodd-Frank policies of the Obama and Democrat swamp rats. The tarot card led FED is no of help whatsoever. Who can save/invest in this monetary malaise?

The middle class works to survive, to provide for their family. In other words, they are patriotic to the core – to God, to their family and to America. They play golf when a vendor invites them to play or when they have a few extra dollars.

I have worked since the age of twelve. I did not receive minimum wage. I supported myself and my family over forty years without government. I have paid it forward multiple times over – Liz Warren are you listening?

Here is a simple partial solution: make dividends paid to investors in this country tax deductible to the corporations and taxed as ordinary income for the people who receive them.This would avoid the issue of double taxation while allowing the richest of our investor class to feel more patriotic.

“Double taxation” has been with us for decades, and officialdom has shown no interest in doing anything about it. I wouldn’t expect that to change; certainly not in the Age of Obama.

The fundamental problem is that it’s not so easy to dodge economics. When it becomes too expensive to do business someplace, business picks up and moves someplace else. No matter how much blustering the Democrats do, they won’t be able to stop that.

The other fundamental problem is that word “patriotism” – it doesn’t mean what Obama thinks it means.

When progressives rant about tax the wealthy, they are talking about high paid individuals who are often the most productive rather than their old money friends.

What is wrong with that is that it never reaches the root of our oppressive tax code.

NO corporate tax is the right answer.

And NO tax on “income”, which is one of the most bastardized terms in history.

Plus, if you want to make U.S. firms more competitive, you lower their tax burden, which they ALLLLLLL simply have to figure into their cost structure for the goods and services you and I and everyone across the world buy.

While agreeing with you in principle, I am willing to suggest changes which would remove some inequities from the current system.

According to The Cato Institute’s report on the effective marginal tax rates on corporate investment, there are three countries that have a higher effective marginal rate: Argentina, Chad, and Uzbekistan. Final exam question: How are their economies performing, and should we strive to emulate their success?

that looks like it’s in the apocalyptic Dark Ages with high crime… and massive murders.

It is puzzling how taxes always must go up, yet gov’t spending can never be reduced. Even for programs that don’t work or which once made sense but no longer do.

We’re continually filling a bucket that has a hole in its bottom.

According to Pelosi, it’s very important that we understand “the [government] cupboards are bare. There are no more cuts to make.” But if anyone points to the 700 billion stripped out of Medicare, the Dems — the same people who shriek about killing granny if anyone mentions the need to restructure Medicare or Social Security — insist that it’s entirely waste and fraud, with zero effect on quality of care.

Stories on inversions miss the primary reason they pursued.

The problem isn’t inversions. The problem is that the US corporate tax system is so bad, and does not conform to the rest of the world.

In the same rant he said, “You shouldn’t get to call yourself an American company only when you want a handout from American taxpayers.”

In other words: whenever the government takes less of your money than Obama wants, that’s a “handout.”

But when masses of illegal aliens invade the country and immediately start getting free medical care, food, housing, education, etc., that’s not a “handout from American taxpayers.” No, that’s a “human right.” Obama luuuvs people who want to be Americans just to get those handouts a.k.a. rights.

Strange how he believes that corporations can be patriotic, but not religious.

Strange how he believes that “corporations are not people,” but accuses the ones who shift their HQs to tax havens of “renouncing their U.S. citizenship.”

What Obama is calling “economic patriotism” had a different name when I was in school: Extortion.

With all his bogus talk of “economic patriotism” – outrageous on its face, coming from a man whose every economic decision has furthered slower growth and stagnation – Obama forgets (or never knew, he isn’t really so bright) that corporate officers have a legal responsibility to their stockholders to earn profits wherever lawfully possible.

All they have to do to protect their worldwide income from double (and high) taxation in the US is to file some paperwork. It might even be criminal NOT to.

Obama is lying. Tax inversions have no effect on US taxes for US operations. Their only effect is to reduce taxes on foreign operations, which are then not subject to the US worldwide tax regime.

The longer this guy is in office, the more convinced I am that I have Tourette Syndrome. Asshole! Douche-bag! Liar! Scumbag!

You’re a United States senator from a state struggling to compete in the world economy. Your daughter runs a giant drug company with roots in your state, and the firm makes a fortune from taxpayers via Medicare and Medicaid. Everything’s cozy and connected and perfectly Washington—until your daughter renounces the firm’s U.S. citizenship to reduce its U.S. taxes. What do you do?

If you’re Joe Manchin, you duck a reporter’s telephone call for six days, then emerge for an interview in which you vow to make your daughter’s actions, from this day forward, illegal.

What is the benefit of giving the Federal government more money? All they will do is waste it and fund more destructive regulations.

Hey Barry, the logjam is in the Senate. Tell your boy Harry to use his decrepit old crone hands to pick up a bill or two and put them on the floor for a vote. When those start going through and you actually sign them into law, then you can start calling for bills.