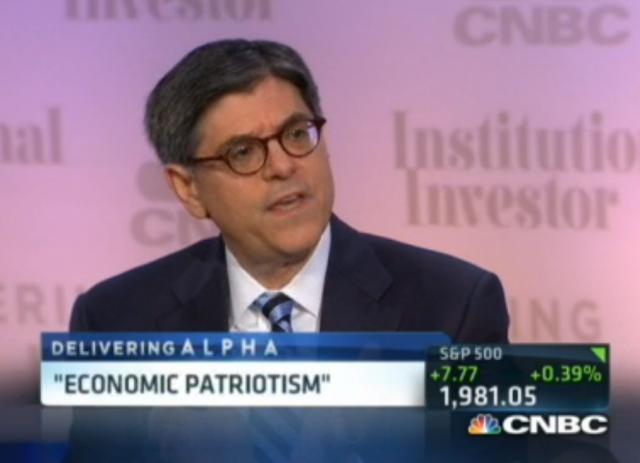 Secretary Lew used the phrase “economic patriotism” this morning on his interview on CNBC to discuss the Administration’s new plans to regulate the corporate marketplace.

“Congress should enact legislation immediately,” Lew told a business conference in New York hosted by cable television channel CNBC. “We should have some economic patriotism here.”

Lew’s remarks came amid a wave of corporate deals known as inversions, in which a U.S. company shifts its tax home base to a lower-tax country by combining with a company based in that country. Popular destinations are Ireland, Britain, Switzerland and the Netherlands.

The deals are still rare, but a flurry of them in recent months has prompted concern in Washington. Medical technology group Medtronic Inc plans to buy Dublin-based rival Covidien Plc and shift its tax home base to Ireland.

Drugstore chain Walgreen Co is weighing a possible inversion. Drugmaker Pfizer Inc’s bid in April to buy UK rival AstraZeneca Plc was structured as an inversion. That deal fell through, but it drew attention to inversions.

According to the letter Secretary Lew sent to Congress today, he urged them to pass legislation to “prevent companies from effectively renouncing their citizenship to get out of paying taxes.”

The Administration is simply trying to force another ill-conceived patch onto a patchwork of non-sensical tax policy. The real answer, of course, is a complete overhaul of our nation’s tax system like the one proposed by The Heritage Foundation.

It boggles the mind… these progs tell us they are intelligent people, right? Can’t they read the history books? Don’t they know how this ends?

Oh wait! They’re SO SMART that they’re the ones who can actually make communism work this time!

Not to pick, but, no. Fascism.

That’s why Lew is making the pitch he is. If if was more overt Collectisism, they’d just take productive assets.

Instead, they PRETEND that capital remains in the hands of its proper owners, while taking substantial control of it, and helping themselves to the produce of the productive. Hence, the appeal to “economic patriotism”, or “We need to make them leave the good stuff where we can grab it”.

I think your argument for fascism is accurate but as in Venezuela it is a short step to Communism where the gov takes over all of the important corporations like energy, food and communications. The thing that Lew is proposing is only the first step. If left unopposed it will lead to Communism without a doubt because Communism is only possible when the perpetrators have the military
at their command otherwise it’s called socialism.

As I’ve maintained here many times, the fascist economics Pres. ScamWOW loves is MUCH more dangerous in America, partly because so few people even recognize what it is and how insidious it is.

One of its features is that it naturally HATES entrepreneurs, since they are so hard to control. It favors BIG, COMPLIANT businesses that naturally TEND to cultivate unholy alliances with BIG GOVERNMENT in order to gain cover from market forces.

It works better than communism, since it retains some market characteristics, but it will result in a shrunken middle-class because the entrepreneurs will be suppressed.

Innovation and growth will be stinted, too.

“BIG, COMPLIANT businesses”
This seems to be the trademark of Euro-land. Taxes high, gov’ts invasive, the corporations neutered (but getting gov’t support to keep disruptive competitors at bay)….it all explains why so much innovation comes from America and comparatively little from Europe.

But when you get American-based corps leaving for Europe to escape tax burdens…holy cow, that’s just wrong.

The Leftist lemmings are arrogant enough to think that a name-change/marketing campaign will successfully promote a thoroughly discredited socioeconomic ideology. Sadly, given the naivete and gullibility of most of the U.S. populace with respect to fiscal issues and economics in general, they may actually be right…

The gov has been irresponsible with the money it has already gotten, there is little reason to give it more.

Were I a CEO, the assets I could control would have been off-shore not less than four years ago.

Anybody with a working brain could see all the crap coming like a bad dream.

yep, the whole “fundamental transformation” line of tripe was telegraphing it fairly plain and out in the open, wasn’t it?

That and the “spreading the wealth around” ejaculation.

Plus Pork-U-lous, the auto-maker (UAW) bail-out, and the banking stuff.

The correct fix here is to change the law requiring double taxation of foreign profits when repatriated. The current tax code penalizes doing business abroad, and also penalizes earning salary while outside the country.

There is really no excuse for corporate taxes, which are simply taxes imposed on the consumers of corporate goods and services, collected by the companies.

Quite regressive, too, if you think about that.

I don’t live in Rio Linda, but in this case, maybe I should.

The only way I can think of for us as a society to ask for patriotic feeling is at the border. New immigrants should be expected to love America and to adhere to our principles.

I do not consider Ayn Rand all that great a writer, but she nailed this administration in Atlas Shrugged.

Like showtime has already pointed out, The Government is nothing but a black hole for tax monies. Junkets to Las vegas,
cash bonus paid by the IRS to employees with unpaid taxes
etc. etc. They don t deserve a dime more, I consider it my patriotic duty to keep money out of their hands !

There’s nothing more patriotic and American than personal responsibility and personal initiative.

How about we all get really patriotic by eliminating all entitlement programs and the huge bureaucratic machine and employment program that’s built around them?
How about cutting the size of the federal government in half?
How about lower taxes for ALL?

That would be patriotic!

I can see why the Administration is pushing this right now – it is part of their economic populism – as phony as it is. Their goal is to convince low-information voters that these evil corporations are screwing the American public.

Of course, there is zero chance that this will pass, at least absent eliminating the double taxation of dividends. Or, at least as long as the Republicans control one House of Congress.

Even if the Dems did retake the House, I doubt that it would pass, though I suspect that Nancy Pelosi would be one of its biggest backers. The problem is that the Dem party is the also the party of crony capitalism, and a lot of them have already been bought and paid for by the same corporations that are doing this.

Real patriotism is declaring permanent war against Totalitarian degenerates like Jack Lew and the greedy Marxist hellspawns that are pillaging our liberty and property.

Real patriotism is liberating our country from a regime who is morally incapable of recognizing the difference between necessary appropriations and institutionalized extortion.

Democrats think you paying taxes are patriotic. Democrats paying taxes, not so much. They have constructed the entire tax code to exempt as much of their money and property from taxes as possible while giving themselves as much of the tax dollars as they can. If they want corporations from offshoring, replace income taxes with consumption taxes. Sales prices are much harder to fudge than income. Income is a game.

If a company wants to move it’s headquarters to a new country, then there is really nothing we can do.

But iof a company restructures and claims it is in a new country, but an examination of an org-chart shows that the same personnel are located in the same places then the company should not be able to claim they are in another country.

There is nothing unpatriotic about this, but this does show a flaw in the tax structure and the tax structure should be reformed so that the company pays the same amount, no matter where they claim they are located, if they are organized the same way.

“…the letter Secretary Lew sent to Congress today, he urged them to pass legislation to “prevent companies from effectively renouncing their citizenship to get out of paying taxes.””

Now they are trying to shame us into paying taxes! Amazingly sad and stupid but what can you expect from demagogues.

It’s also amazing that Lew, Obama or any bureaucrat still have jobs after such a small percentage of dollars have left the country. Poor babies, they see the results of their fiscal policies; the avalanche is starting. The little ones are fighting for their worthless jobs.

These boneheads wouldn’t know Patriotism if it saved their lives.

Any Obama Administration Cabinet Member talking about patriotism is like a hooker advocating for chastity, that was my first thought.

The second was, “you can’t mandate patriotism any more than you can mandate faith. You either have it or you don’t.” Mostly Dems don’t. They have liberalism in place of faith, patriotism and respect for the rule of law.