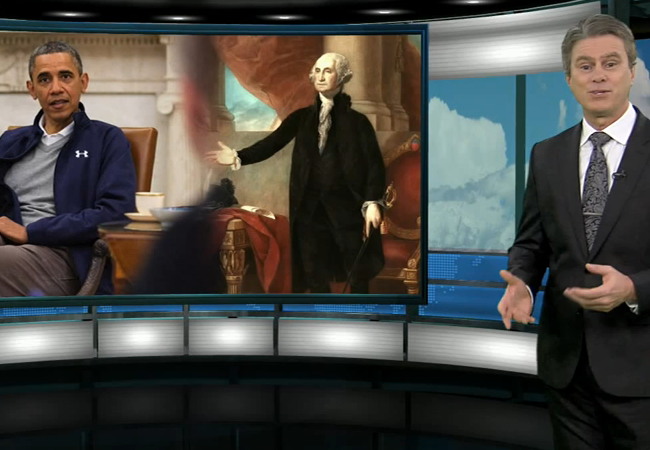 This video is actually a side by side comparison of President Obama and President George Washington, just in time for July 4th weekend.

Why should Washington be a slur any longer? Our first President has nothing to do with the way the town named for him has become synonymous with narcissism, overburdening regulation and cowardice. No, this city looks more like Obama’s vision, rather than Washington’s.

Watch the video and leave your thoughts in a comment.

Bill Whittle is always thought-provoking. Unfortunately, I know of too many people that think he is some kind of hero, and can do no wrong. Those people rarely know what he has done, in part because they get their news from NPR, which appears to be a captive propaganda agency of the Democratic Party.

I wonder if there is a way to hijack NPR?

I wonder if there is a way to hijack NPR?

I gave that some thought once, and concluded that it should be done. It would require firing exactly half of its reporters and producers by drawing straws, then replacing them with an equal number of reporters and producers who hold the Constitution, the US military and the rule of law in the same reverence as the current bunch hold progressive ideals, anti-Christianity and their oh-so-theatrical use of overarticulated diction.

Broadcasts would be scheduled the same as Congressional hearings are today, in equal time segments alternating between the red-state and blue-state staffs. The selection of news items for coverage would also be shared equally between the reds and blues.

A great improvement in fairness would immediately be apparent, as each side would provide checks and balances to the other. There would admittedly be a rough transition period, as nearly half of the current subscribers would withhold their largesse, and a new set would spring into action to support the newcomers now that their formerly-excluded perspective would be heard for the first time on NPR.

Other details. Most likely, separate production studios and green rooms would be required, as the former rulers of the roost would bear a Confederate-worthy hatred of the red-staters, who in turn would regard the blue-staters as but one step removed from various asylums. And the Executive offices, currently paying the top dogs astronomical salaries and perks, would have to be half-culled by lot, same as the production staff, to be replaced by red-staters in an Executive of true diversity. In a gesture to the taxpayers, those salaries and percs should ould be immediately halved as an apology for all the years of radio monoculture and ads for progressive foundations.

Forward into a bright NPR future!

I’m surprised that Val Jar hasn’t found a way to copyright Obongo’s image so that he’d be entitled to a royalty ever time a photo was taken.
I believe Hitler had a similar arrangement and got a cut off of every German postage stamp that was sold way back when.
Obamadelphia….the SOB would sign that bill in a heartbeat!

Whittle refers to Obama as the “last President.” I find that quite disturbing.

I know with 100% certainty though, that Bill Ayers will be the very last Bill Ayers.

Ever have one of those “light bulb moments”?

Thanks to Bill Whittle, I did a few years ago after his watching one of his videos.

I don’t remember the name of it exactly, but it referred to the “restrained vs unrestrained” revolutions that compared the American revolution to the French revolution. I think you have to subscribe to view it, as I cannot find it.

For me, it was a moment of absolute clarity- The difference between what we now call progressives and conservatives. Once you understand the template, the convoluted agendas are easy to understand.

I recommend finding it…watching it.

Let’s see some imagination. How about

(OIIOHH = Obama Is In Over His Head)

and Obama Bows his Big Head Soooooooooo Low – that his high-heeled platform shoes don’t help at all.