Thad Cochran Ad: I’m really this desperate (not the title, but should be) #MSSEN

Thad Cochran Ad: I’m really this desperate (not the title, but should be) #MSSEN 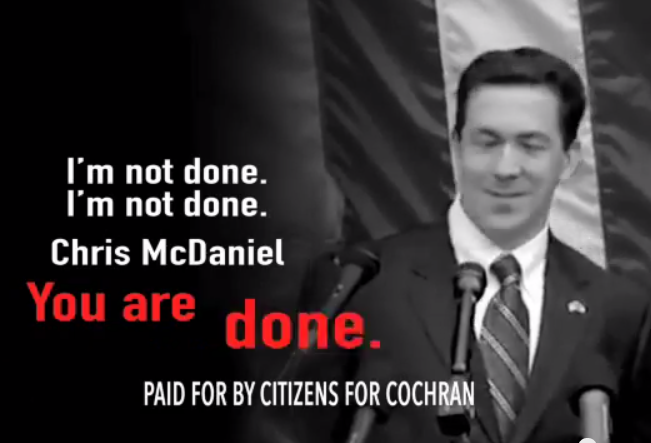 Maybe this would have worked had it been done early and often.

Even Josh Marshall at TPM notes:

Not totally shocking for what you hear on talk radio. But maybe a problem for a would-be United States Senator.

Using a candidate’s own words against him certainly is fair game. And this ad isn’t any worse than normal political fare.

But coming when it does, it smacks of desperation.

This the sort of ads we can expect to see from Democrats if McDaniel wins. Probably better for McDaniel to get them out there now.

Cochran is a walking, talking argument for term limits, and the only reason he’s being propped up by the eGOP is so his successor in office can be picked by them.

If this is the worst thing they can gin up against McDaniel, he’s pretty clean… And they’re pretty pitiful.

This, in public from a politician, who knows he’s being recorded ?

Great, I want HIM for a leader of this country !

On the other hand, the other guy brags that he ‘grew up doing (unspecified) ‘indecent things’ to animals.

There is no context provided for the quote from McDaniel’s radio show, probably for good reason. Was he joking? Quoting someone else? Sarcasm? Or is that how he speaks to hispanic hotties?

Another recent candidate used a lot of highly negative ads towards the end of his campaign – Eric Cantor.

Oh lawdy, this barber shop banter is giving me the vapors!

I mean, these sentiments are only agreed with by – what? – maybe 9 out of 10 white voters in Mississippi?

Anyone for whom this kind of joking around is a dealbreaker, wasn’t voting Republican anyway, trust me!