Hinds Co. Sheriff says no crime committed by three people locked in Courthouse where ballots counted, but prosecutors will investigate anyway at request of county supervisor. 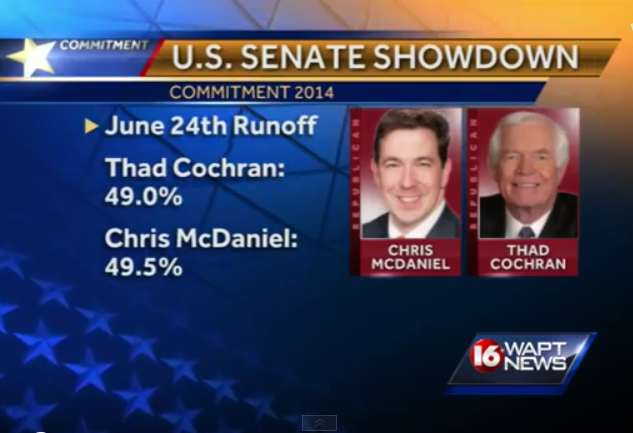 In the ever bizarre Mississippi Republican Senate Primary, three people were locked into the Courthouse where the primary ballots had been counted after hours. The three claimed they had entered through an open side door. The ballots themselves were locked in an inaccessible vault, and never in danger.

The incident dominated the news cycle for about 48 hours because one of the three was a coalition coordinator for the campaign of Chris McDaniel.

The Sheriff’s department investigated, and determined that no crime was committed, as we wrote in Chris McDaniel courthouse break-in “scandal” is a nothingburger, quoting an MSNBC report:

“Based on our findings and subsequent conclusion, there is no reason to believe that the three individuals engaged in any criminal activity nor do we believe any laws were broken,” a statement by the Hinds County Sheriff’s office read on Thursday.

According to the sheriff’s office, the three McDaniel supporters gained access to the courthouse through an employees-only side door that was not meant to be open. Once it closed behind them, they found themselves trapped and searched the building in hopes of finding an employee who could help them leave. They never had access to any ballot boxes, which were in a secure locked area, the sheriff’s office said.

Then a county supervisor asked the Hinds County District Attorney to investigate anyway, and the DA agreed, as reported in the Clarion-Ledger:

The Hinds County District Attorney’s office will investigate how a staffer for state Sen. Chris McDaniel’s U.S. Senate campaign and two other McDaniel supporters ended up locked inside the county courthouse hours after everyone had left on Tuesday’s primary election night.

Smith said late Friday he agreed to his office conducting an investigation. He said the investigation would begin immediately and he hopes to have it completed over the next several days.

“We will try to answer the questions supervisors have,” Smith said.

Graham’s decision to ask for a further investigation comes after the Hinds County Sheriff Department said Thursday afternoon it had concluded an investigation and found no criminal activity or laws broken.

“Even if there was no criminal activity, it still doesn’t account for why these three individuals were in the county courthouse afterhours with no county employee,” Graham said. “We have no information whether they had criminal intentions or not. We don’t know how long they were in there…We need to have a total accounting.”

“Even if there was no criminal activity” the police power of the state is used to investigate a non-crime merely because it has political importance?

Oh, and trust me, the mere existence of the DA’s investigation is being trumpeted by Cochran supporters.

I emailed the DA yesterday morning with the following question:

I’m trying to understand why your office has accepted the request to investigate in light of the Sheriff’s findings. Does your office have reason to believe a crime may have been committed?

As of this writing I have received no response.

Why the three were in the courthouse is a legitimate political question.

But in the absence of the DA knowing something the Sheriff’s office did not know about potential criminality involved, it’s inappropriate for prosecutors to inject themselves into a close political race.

I’ve never heard of anyone charged with aspiring to tamper with ballots but failing due to comic incompetence. We may be seeing new law established right before our very eyes.

It’s called attempt, and it is a crime.

I’ve been at that same courthouse (quite late at night, even) on election nights to monitor vote counting. Hinds County was one of the first counties in MS to move to electronic voting, and over several elections I helped document the flaws in the system they purchased. On another occasion, I was a poll watcher for a candidate.

On election nights, the process quite often runs late and the back doors are the ones used because they lead into the basement where the counting occurs. I haven’t, however, ever used the door that it appears these individuals used. As best I understand, it would take you into the part of the clerk’s office that handles marriage records and old files (and is connected to the rest of the clerk’s office). The ballots (and memory cards) get locked up, though, so they wouldn’t be at risk once counting is over. I’m still unclear on how one could get locked in the building, though, since there are several exit doors that should work at all times.

Cochran’s sister in law is one of the commissioners.

So, a DA can get an indictment against a Ham Sandwich is due to what? So, not everything must be kosher, should it?

They probably should figure out who locked up without clearing the building first, but it has nothing to do with the primary, apparently.

(Local prosecutors frequently open investigations at the request of local councilmen/supervisors, welcome to the real world).

It is certainly fair to say this is a “nothingburger,” but this isn’t the case or investigation which should concern Republicans anyway.

Let’s hope this comes back to Cochran in a negative way, when the DA determines (I would think, given the sheriff’s conclusions) that nothing happened.

The person who failed to secure the building, locking up all doors, should be in DEEP trouble, though.

A political witch hunt pulled by your inside cronies (and apparently relatives) would put McDaniel even more ahead, I believe, providing an image-killer for Cochran when he is exposed as a desperate, weak, and unscrupulous, elitist, hack pol with cronies willing to stoop so low.