Prosecutors back off Scott Walker: Not target, no evidence of crime

Prosecutors back off Scott Walker: Not target, no evidence of crime

After a week of complete media malpractice, in which scurrilous accusations that Wisconsin Governor Scott Walker participated in a “criminal scheme” were plastered all over the headlines, a lead prosecutor has completely backed off.

Crocker issued the statement a week after a court document Schmitz wrote late last year and made public late last week identified Walker as being part of an alleged “criminal scheme” to coordinate with outside groups and violate campaign finance laws.

Crocker said no conclusions have been made about whether there is enough evidence to charge anyone with a crime.

“Contained in these documents is a reference to the request for production of documents that relates to an alleged criminal scheme. Gov. Walker’s name was included in this reference,” Crocker said. “While these documents outlined the prosecutor’s legal theory, they did not establish the existence of a crime; rather, they were arguments in support of further investigation to determine if criminal charges against any person or entity are warranted.”

Crocker added, “Mr. Schmitz has made no conclusions as to whether there is sufficient evidence to charge anyone with a crime.”

With impeccable timing, Democratic challenger Mary Burke just released a TV ad focusing on the accusations of “criminal scheme” from which prosecutors have just walked away:

Doesn’t look like it. Although reported hours ago, almost no mainstream media headlines mention the prosecutor’s statement as of this writing: 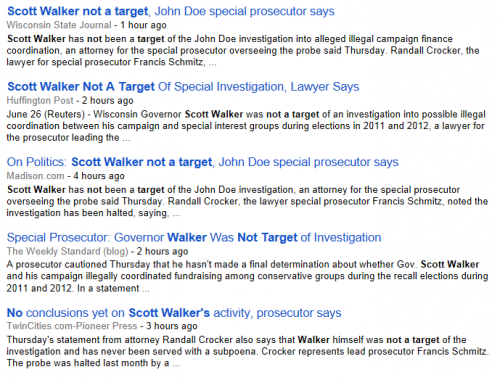 By contrast, here’s what the headlines looked like soon after the original release of the “criminal scheme” accusations: 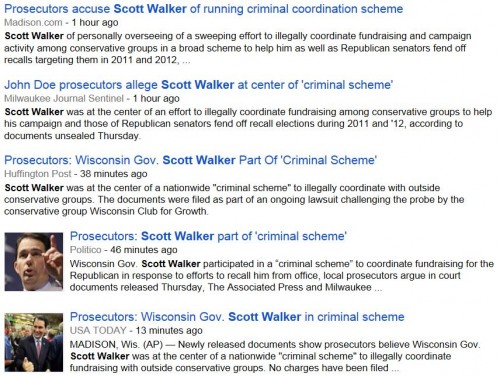 It goes beyond malpractice. There appears to be a desire in the mainstream media to spread smears about Walker, but not to report either contrary judicial findings or the fact that prosecutors have backed off the accusations.

This plays right into the hands of Democratic politicians like Mary Burke, who are just waiting to jump on any claim of impropriety by Walker, no matter how baseless.

In Crocker’s statement Thursday, he wrote “it is wrong for any person to point to this sentence in a legal argument as a finding by the special prosecutor that Governor Walker has engaged in a criminal scheme. lt is not such a finding.”

“After the media’s slanderous reporting last week, today’s statement by prosecutors should serve as an opportunity for the media to correct the record and report the real facts of this story,” Evenson said.

The other day I asked Will “John Doe” tactics against Scott Walker backfire?

With this latest announcement by prosecutors, it’s looking more likely.

I question the timing.

Nor is it the BREAKING NEWS in my facebook feed (including several WI newspapers and TV stations) as it was when last week’s story broke.
~SHAMELESS~

Live by the scurrilous smear…

The Walker commercial writes itself.

It was not unexpected that these ‘rat gunslingers masquerading as prosecutors would back off through their hired mouthpieces to try to avoid negative impressions and lawsuits after they and their fellow travelers in the press achieved their objective.

That the ‘rat candidate is carrying it forward in the face of the prossies pulling back comes as no surprise. It’s like running a relay – passing the baton to the next runner.

Knowing the press will cooperate, she doesn’t risk looking like an idiot to the voters. She wants to get elected in the worst way because defeating Walker would ensure her fame and fortune in the ‘rat party for decades.

This was all orchestrated and timed, imo.

The only thing more sickening than this is the primary runoff in Mississippi Tuesday night. To see the Republican party go after it’s own people to preserve the candidacy of Thad RINO Cochran is one of the rottenest things I have ever witnessed coming from my party against one of its own. We need to mobilize and offer McDaniel a lot of money for a write in campaign. If one opens up I will support it to stop swine like Haley Barbour and Karl Rove.

The GOP has always eaten its own. Look at Romney’s attacks on Gingrich and others, then look at how soft he went on Obama. The GOP only has the courage to attack its own and very little stomach for a fight with Democrats. They don’t want the TP guys coming along and forcing them to fight.

McCain was as bad if not worse than Romney. And early, early indicators are that Romney will run again and the GOP is “all in” for him.

“Crocker said no conclusions have been made about whether there is enough evidence to charge anyone with a crime.”

Even in stepping back, the prosecutor is lying. The court has already concluded, via its judgments, that there is no evidence (voiding the mendacity of ‘whether there is enough evidence’) to charge anyone with a crime. But, this, like the whole case, is not about the law; it’s about electing a Democrat governor in WI and rolling back the Walker reforms.

I was once told by a doctor that the ointment I used for my athletes foot issue should be discontinued after about ten days.

He said because the fungus gets used to the medicine and ends up seeming to “like” it.

Maybe Walker is the same way. The more they mess with him, the less it affects him. Politically, he may very well like it.

I think he’d rather be focused on other things.

A relative of mine had that problem. Foot fungus. She’s cured of it now, but not with the meds. A five minute foot soak of hot water, with copious amounts of salt and vinegar (can’t recall if it’s white or apple cider). Then, when the feet are extracted and dried, apply iodine very generously and leave it. The relative said the foot throbbed awfully during the night but the fungus is gone. One last bit, mix iodine and water, be generous with the iodine, and clean the insides of the shoes with it, letting the dioxins soak in.

We can always count on the ‘rats for petulance and pugnacity.

We see it in the obamullah administration all the time, a current example being obamullah retaliating against AZ and TX by opening the southern border. But I don’t recall ever seeing it reach this pitch at the state level. I’m speculating that this is primarily driven by the unions. If we had real investigative journalists at the mainstream level, I’m sure somebody could easily trace the activities of the prosecutors back to the parties driving them. Instead, the slimestream media in Milwaukee and Madison are all in for the ‘rats and will never investigate.

“After the media’s slanderous reporting last week, today’s statement by prosecutors should serve as an opportunity for the media to correct the record and report the real facts of this story,”

Why not name names? “Shep Smith, Chuck Todd, Politico, et al. They fell for this hoax. We challenge them to correct the record and report real facts.”